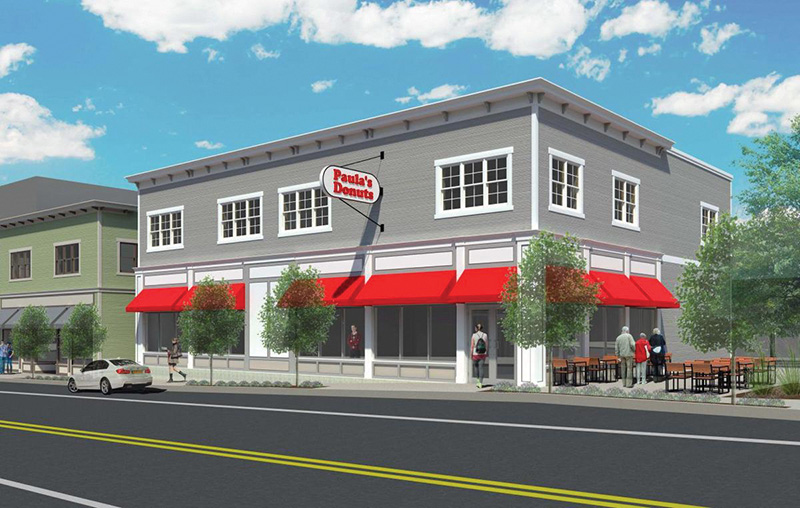 Buffalo, NY TAYLOR, the Builders, a leading regional commercial general contractor in Upstate, is nearing completion of the construction to create the Seneca Street Infill located at 864 and 872 Seneca St., anchored by the fourth location of Paula’s Donuts. TAYLOR is teaming with Larkin Development Group to construct these two buildings, with street façades designed to emulate the row attached buildings historically found along Seneca St. The two-story 2,234 s/f building at 864 Seneca St. features market-rate apartments and retail space, while the two-story, 4,032 s/f building at 872 Seneca St. is a commercial space that houses Paula’s, along with second floor apartments. Construction completion, including the opening of Paula’s, is slated for early spring 2021.

“TAYLOR is excited to support the historic Larkinville community with Seneca Street Infill, along with the current Millrace Commons construction.” said TAYLOR president, Karl Schuler. “We are pleased to contribute to Larkinville’s long-term goal to create a live-work-play area adjacent to downtown by building dream spaces for tenants and residents to enjoy.”

Seneca Street Infill is the type of development that Larkin Development Group will continue to build, in order to create mixed-use density in the district, bringing new residents and business to the historic Larkinville neighborhood. Located adjacent to Larkin Square and the Larkin at Exchange Building, the 85,000 s/f mixed-use building, Millrace Commons, is also nearing completion at 799 Seneca St. in the center of Larkinville. The ground floor of the Seneca St. wing will have 13,000 s/f of retail. On the second through fifth floors will be 70 market rate apartments made up of studio, one- and two-bedroom units.