Rochester, NY Affordable infill housing and targeted retail outlets with limited square footage will be the community development model for the next 10-15 years, according to HUNT Engineers and Architects’ senior project manager, Tom Bailey, AIA.

“Even in mid-sized cities like Buffalo, Rochester, and Syracuse, the developers have come close to exhausting the available old manufacturing buildings and are already building residential units in what were class A office spaces as recently as five to ten years ago,” said Bailey.

HUNT’s Bailey and their partners at Vecino Inc. are at work on a multi-story, infill project in Ithaca that is immediately adjacent to the Ithaca Commons and Center Ithaca. The initial phase is a four-story addition to the existing garage, located at 120 Green St., creating a sustainable facility with EV charging stations, car-share parking spaces, and an “empty-space-locating” light system.  The estimated cost for the garage project is $8.7 million.

Phase II will include retail space on the ground floor, a convention center, and a 12-story housing development. 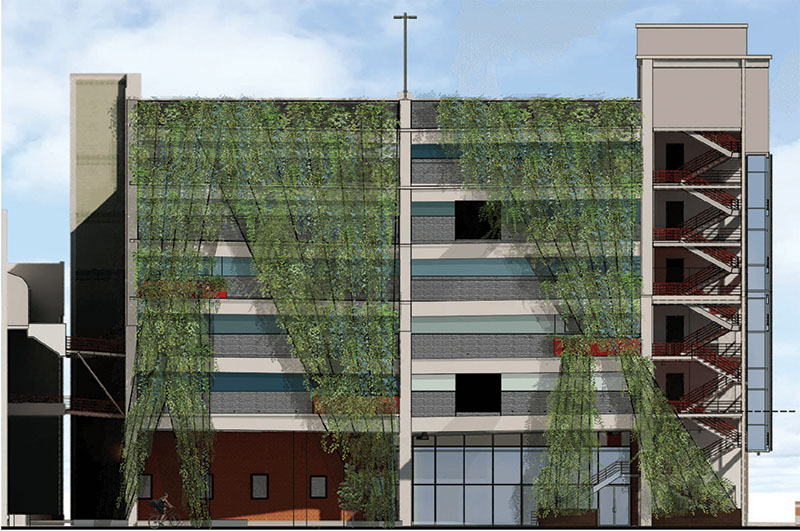 “The Vecino Group’s and Ithaca’s reputation for thoughtful and progressive development is well-deserved,” said Bailey, “and despite its fairly dramatic size, they have embraced this housing and parking garage as a way of taking the Commons and residential life there to another level. If you look at the development in the Washington Beltway and New York City’s boroughs you can get a real feel for where we are all going. Young adults and families want the neighborhood feel and to be within a train or bus ride of work and world-class entertainment.”

Before joining HUNT, Bailey was a retail designer and architect at Bergmann Associates and Smith Associates, and he also brings planning and national mixed-use development experience to his perspective.

“Our local development partners like the DiMarco Group and JADD Mgmt. are reporting that with the right mix of retail offerings their strip plazas are becoming vibrant community centers,” said Bailey.

DiMarco’s BayTowne Plaza in Webster is an example of Bailey’s vision, where the developers have literally broken through an existing building and created a main-street-style retail venue capped by a pocket park.

Bailey holds onto a tinge of a southern drawl that underlines his Auburn University degree and post-college career in the southeast. As a founder of the planning department in Kissimmee, FL, he developed regulations to help control development created by the opening of Disney World, as well as initiating the Downtown Historic program and the design for Kissimmee Lakefront Park.

From there, he led regional and national design and development efforts for GM, Ford, Goodyear, NASCAR, and the Robert Lee & Associates petroleum retail design group.  His ability to bring together this eclectic mix of interests came to fruition as Planning Director in Valdosta, GA., where he spearheaded the development of an 1,100-acre, multi-use residential development that included a 400-acre, man-made lake.

At the HUNT Rochester office, his music -loving colleagues will tell you they are equally intrigued by Bailey’s role as president of the Fiddlers of the Genesee, founding member of “Sawgrass” bluegrass band, and host of bluegrass jams at a downtown music shop.