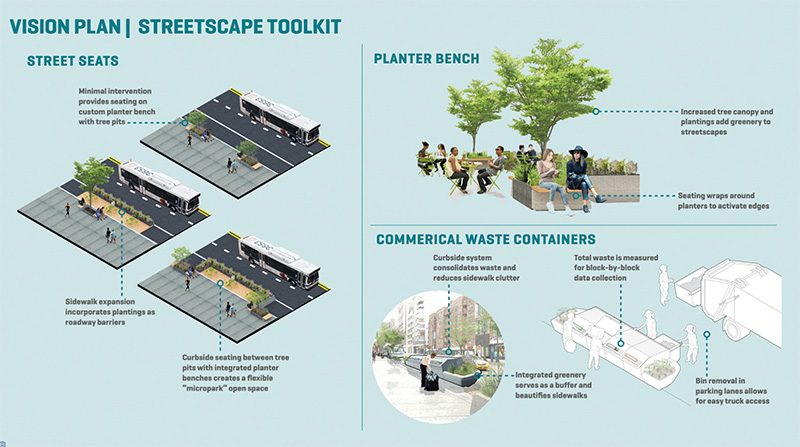 Manhattan, NY The Union Square Partnership released the Union Square-14th St. District Vision Plan (Vision Plan), a new proposal for the future of the neighborhood that will result in a 33% increase in public space.

Designed in collaboration with Marvel, the Vision Plan is the culmination of a two-year-long process.

Since its opening in 1839, Union Square Park has undergone several design changes, each of which have incrementally made it a more welcoming and pedestrian-friendly urban public square. This plan seeks to expand the benefits of this great public space into the surrounding community. All told, the plan comprises reconstruction of roughly 1 mile of streets and 3.5 acres of existing park land, construction of a new accessible subway entrance with elevator and escalator, and installation of district-wide streetscape improvements in an area of 20 city blocks.

“We are proud to unveil a Vision Plan that places the needs of the Union Square-14th St. community at the forefront by promoting openness, equity, safety, and accessibility. The ultimate goal here is for parkgoers to know they have arrived at a place that is special,” said Jennifer Falk, executive director of Union Square Partnership. “Initiated as a response to the proposed L train shutdown, this Vision Plan evolved as COVID-19 upended our world, and with it, our relationship with public space. More open space, safer pedestrian and cyclist travel, better transit, and more outdoor seating and greenery - all of these changes are called for in this plan and will benefit our community immeasurably as we chart the district’s next chapter.”

“For many New Yorkers, Union Square is the heart of the city, attracting a rare and vibrant combination of residents, shoppers, and office workers. Our design preserves the wonderful qualities that draw people to Union Square-14th St. and provides more room for pedestrians by extending the park to adjacent areas and reducing congestion. By finding a way for the park to grow and evolve with the city around it, we are maintaining the balance of the space, making it more beautiful and enjoyable for everyone,” said Guido Hartray, AIA, founding partner of Marvel.

“The Union Square Partnership has a long history of implementing streetscape and park improvements that continue to make Union Sq. one of New York’s more cherished spaces and most desirable neighborhoods. This Vision Plan is the culmination of a two-year-long process with input from community members, local business leaders, urban designers, landscape architects, and transportation experts all aiming to invest in the districts’ future,” said Lynne Brown & William Abramson, Union Square Partnership Board chairs. “This plan will increase public space by 33%, facilitate transit access, and beautify the district for residents, businesses, and visitors alike.”

“As we’ve seen from the success of the 14th St. Busway, prioritizing streetscape and open space for pedestrians, cyclists, and public transportation, can have a unique and positive effect for nearby businesses, residents, and our city as a whole. The Union Square Partnership Vision Plan demonstrates the next step that we can take in collaboration with the community to promote a connected and accessible Union Square Park and District of the future,” said Councilwoman Carlina Rivera.

“Having lived and worked in and around Union Sq. for over 35 years, I’ve experienced just about every moment of evolution and development in the park and its surrounding neighborhood,” said Danny Meyer, Founder, and CEO of Union Square Hospitality Group. “Now, after a year in which so many in our community have been isolated and forced to be socially distanced, it’s refreshing to re-imagine a once again thriving Union Square made more commodious with additional public space carved out for people to be with people.  We crave and need that.”

This Vision Plan responds to the city’s current challenges and proposes a series of targeted enhancements to create an environment — both in the park and the surrounding neighborhood — that is open, welcoming, and connected. Each of the major projects outlined in the plan offers improvements in walkability, transit, public space, and general beautification. Together, these projects will increase the open space around Union Square by at least 33%.

The plan builds upon the Union Square Partnership’s past district improvement work, most recently the renovation of the North End of Union Square Park. It also brings together, under one cohesive vision, several city initiatives including NYC Parks’ Parks Without Borders, and NYC DOT’s Plaza Program, the 14th St. Busway, and their plans for the pedestrianization of Broadway.

“Our public spaces thrive when we improve connections between parks and neighborhoods,” said NYC parks commissioner Mitchell Silver, FAICP. “This vision will enhance Union Square Park with a more seamless, equitable, and accessible design. The plan is an outstanding example of how our Parks Without Borders framework can be applied to one of New York City’s most iconic parks.”

“Not only do BIDs create vibrant, clean, and safe districts—they are uniquely positioned to help design an ideal neighborhood landscape for the changing times,” said Jonnel Doris, commissioner of NYC Department of Small Business Services. “The Union Square Partnership’s Vision Plan is an excellent example of proactive leadership and foresight that can positively transform the district and support its stakeholders, including businesses, and residents.”

“GrowNYCs Union Square Greenmarket has served as a vital community resource for 44 years, while helping to secure nearly 20,000 regional acres of farmland,” said Marcel Van Ooyen, president and CEO of GrowNYC. “The infrastructure investment within the Union Square Partnership Vision Plan, as well as its transformation of space for pedestrian uses, from sitting with friends, to biking safely, to enhanced greenspace, will help to ensure the market’s success for future generations.”