This month we look at the original location of the Copacabana nightclub which opened in 1940 at 10 East 60th St. in the Lenox Hill Neighborhood of New York City. The club, when first opened, had questionable mob ties and racist entrance policies. It was known for its Brazilian décor featuring singer and dancer Carmen Miranda, Latin-themed orchestra, Chinese food, and its chorus line known as “The Copacabana Girls.” The club featured high profile performers throughout the 1950s and 1960s such as Harry Belafonte, Sammy Davis Jr. and Sam Cooke. Dean Martin and Jerry Lewis were also frequent performers there. There were also a steady stream of Motown Acts including the Supremes, the Temptations, Martha and The Vandellas and Marvin Gaye. It also became a well-known hangout for legendary sports figures including some then-famous Yankees who were involved in a well-publicized altercation in 1957 with some of the patrons which would ultimately lead to some unpopular team trades. The venue was known to attract hard partying wealthy and famous people. 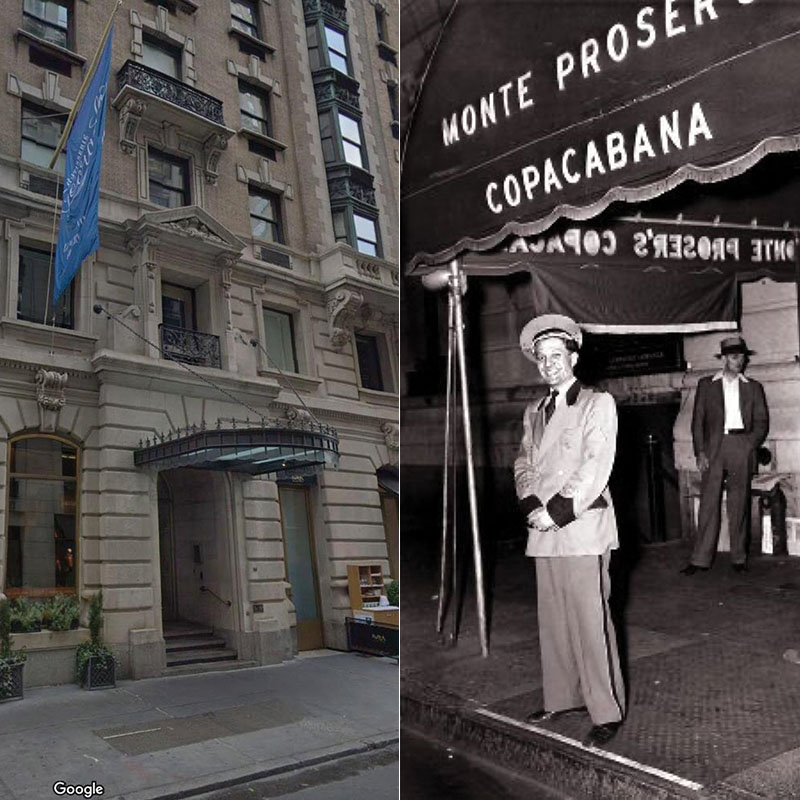 Lenox Hill is an affluent area situated between East 60th St., 77th St. between Fifth and Park Aves. in the lower part of the Upper East Side of Manhattan which at one time was considered no man’s land. The name Lenox is that of an immigrant Scottish merchant Robert Lenox who had accumulated approximately 30 acres of land in the late 1700s into the early 19th century, part of which was a farm. The name of the neighborhood incorporated a hill which stood at what became 70th and Park Ave. Most of the farm was eventually divided into building lots by a family member and sold during the 1860s and 1870s to make way for what is known today as Presbyterian Hospital. Much of the Upper East Side consisted of German settlers early on and in 1805 a Dispensary Hospital was created to serve this population. Eventually this would become known as the Lenox Hill Hospital. By the early 1930s the area had developed a reputation for pioneering medical innovation. Land was also set aside for the Union Theological Seminary and the Lenox Library which is now the site of the Frick Art Collection Museum. Luxury residences began appearing in the early 1900s along with art galleries, boutiques and high-end hotels.

By 1973 it had lost its popularity and had closed until several years later when it reopened as a disco. In 1992, a series of relocations would ultimately lead to its closure in 2020 after 80 years in operation, although there have reportedly been plans to reopen again in 2021. The building that housed the Copacabana on the ground floor is a 13-story commercial office building that was built in 1903 with approximately 152,00 gross s/f. The ground floor space is now occupied by popular Greek restaurant Avra Madison.