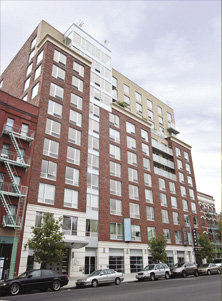 While new condominium projects are visibly changing the skyline of Brooklyn, Manhattan and Queens, rising condo prices in Northern Manhattan have seemingly gone unnoticed. Most building uptown over the last few years has leaned towards new rentals but the condo market is gathering so much momentum in 2013 that its growth cannot be ignored and we're starting to see development site prices rise accordingly.
Central Harlem offers several prime examples of this upward trend. Through the first 10 months of 2013, condo buyers paid $671 per s/f on average, though this average is much higher for properties south of West 125th St. Developments such as 2280 Frederick Douglass Blvd., 394 Manhattan Ave., and 5th on the Park at 1485 Fifth Ave. are at the forefront of this trend, seeing prices as high as $1050 per s/f.
East Harlem has also had its fair share of rising prices, with condos there seeing an average price per s/f of $739 in the first 10 months of the year. Copper Hill, aka 1595 Lexington Ave., has seen sales average $847 per s/f, with several deals approaching $1,000. Other local developments like Observatory Place and Lexington Hill Condominiums are seeing values consistently north of $750 per s/f.
During the last cycle, which peaked in 2007, the average price per s/f for condominiums uptown was around $650 and while pricing at today's levels occurred it was with much less frequency.
This renewed condo activity is adding fuel to Northern Manhattan's development site market. After peaking at $120 to $125 per buildable s/f in 2006-2007, prices of uptown development sites dropped to an average $55 per buildable s/f in 2008-2009, but rose to $107 per buildable s/f in the first half of 2013, the first time since 2008 that the market saw a price per buildable s/f above $100.
With rents now surpassing pre-crisis levels, a lack of newly constructed supply and more financing available to experienced developers, development sites have become more popular and the number of these transactions rose to 26 in the first half of 2013, a 54% increase compared to the first half of 2012. Prices are also being pushed up by a relative scarcity of viable development sites, be it vacant land, garages or vacant shells. Many prime development candidates were sold and developed during the last cycle and a great number of those remaining were bought in recent years by opportunistic developers seeing the market picking up.
Together, these factors make today's development market uniquely competitive. Bidding activity is strong and prices are rising with little reason to believe they will abate any time soon.
Our firm has marketed about 500,000 buildable s/f uptown in the last 18 months including a joint venture project we're selling at 256-258 West 125th St. that would allow for up to 81,745 buildable s/f. Investors are increasingly exploring condominiums instead of just relying on rentals as they look to take advantage of today's sellout prices and strong rental fallback position.
The new retail, residential, and office development along the 125th St. corridor will make Northern Manhattan an even more desirable area in which to develop housing. On the west side the 17-acre expansion of Columbia University from West 125th to West 134th St. between Broadway and 11th Ave. is already translating to increasing rents and building prices. On the east side, a mammoth 320-ft.-high twin tower development, with 650,000 s/f for rental apartments and retail, is planned for a long-stalled development site at 1800 Park Ave. between 124th and 125th Sts.
Artimus Construction, which has been one of Northern Manhattan's most active residential developers, is planning to build housing and a community space on the site of the former St. Thomas the Apostle Church on West 118th St., according to the NY Post. The rectory will be converted to condominiums, the faÃ§ade of the church will be saved and its interior converted into a community space and a 70-unit, 12-story, mixed-income residential building will be constructed at the rear of the property.
So where can investors find value uptown today? We believe the best place is Washington Heights. We recently sold a development site with 97,119 buildable s/f at 4452 Broadway in Washington Heights for $75 per buildable s/f. And, of the 15 condos sold in Washington Heights in the first 10 months of the year, the average price was $442,333, and the average price per s/f was $467.
More information is available in our Northern Manhattan 2013 Mid-Year Sales Report at http://arielpa.com/newsroom/report-APA-N-Man-mid2013-Sales-Report.
Michael Tortorici is a vice president at Ariel Property Advisors, New York, N.Y.
Tags:
Previous StoryNext Story
Print
PDF