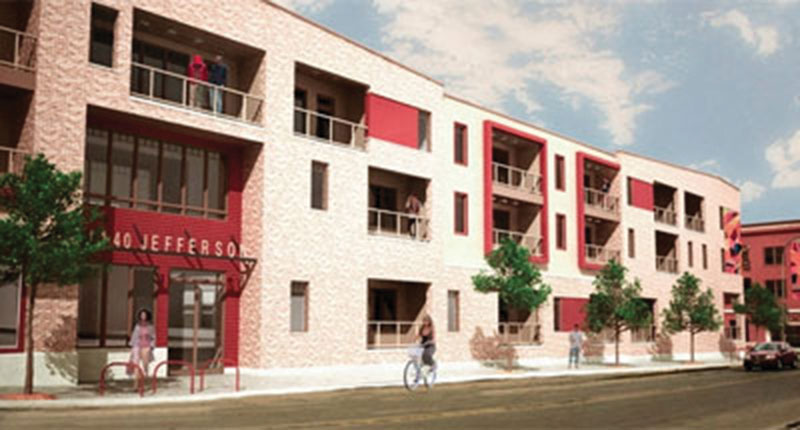 Buffalo, NY Construction on a $31 million affordable and supportive housing development on the city’s East Side has begun. Jefferson Ave. Apartments will include 89 affordable apartments in two buildings with 16 units set aside for individuals with intellectual or developmental disabilities. The ground floor of both buildings will contain a total of 16,500 s/f of commercial space. The project was supported by the Better Buffalo Fund.

“Building new affordable and supportive housing is integral to revitalizing our cities and providing some of the most vulnerable New Yorkers a place to call home,” governor Cuomo said. “The creation of Jefferson Avenue Apartments perfectly illustrates New York’s investment in Buffalo’s East Side, spurring economic activity in the neighborhood and enhancing overall quality of life for generations to come.”

Jefferson Ave. is a main artery that runs through the East Side and is near several college campuses, Buffalo’s Medical Campus, Rte. 33 and the city's downtown. The revitalization of Jefferson Ave. as a commercial corridor with affordable housing is a priority infrastructure project for the city.

This project complements other investments made by New York to further revitalization of the Buffalo’s East Side. The Forge on Broadway is redeveloping the long vacant site of the Buffalo Forge Co. The four-phase development will eventually include nearly 250 affordable and supportive homes for individuals, families and seniors, townhomes for first-time homebuyers, and ground floor retail space. Construction on the first phase is underway. Since 2011, New York State has invested more than $252 million on Buffalo’s East Side using locally driven strategies.

Located at 1140 Jefferson Ave., the development will be constructed on two formerly vacant lots. Jefferson Ave. Apartments will include 71 one-bedroom and 19 two-bedroom apartments across two three-story buildings. Support services will be provided by People, Inc.

The development is served by three bus lines and is adjacent to Masten Park, which contains recreation facilities including tennis courts, track, a baseball diamond, swimming pool and playing fields. The development is close to a grocery store and small shopping center.

The state’s commitment to providing all New Yorkers with access to safe, affordable housing is reflected in the state’s unprecedented $20 billion, five-year Housing Plan. The plan makes housing accessible and combats homelessness by building and preserving more than 100,000 units of affordable housing and 6,000 of supportive housing. The plan is a comprehensive approach to statewide housing issues and includes multifamily and single-family housing, community development, and rent stabilization. Since 2011, HCR has invested $226 million in Western New York that has created affordable housing for about 9,000 residents.

Empire State Development president, CEO & commissioner Howard Zemsky said, “The targeted push from the Better Buffalo Fund to incentivize vital projects like the Jefferson Ave. Apartments is revitalizing the city’s neighborhoods and strengthening its communities, which lead to a bright economic future for Buffalo.”

Mayor Byron Brown said, “Congratulations to everyone involved in this $31 million Affordable and Supportive Housing Development that’s going to create jobs and more affordable housing opportunities for our residents. Today’s ‘construction kick-off’ represents a significant milestone in the Jefferson Ave. neighborhood and another win-win for our entire community. As we continue to grow Buffalo into an inclusive and equitable city of Opportunity, we recognize that strong neighborhoods are critical to the economic strength of Buffalo. The Jefferson Ave. Apartments will be a great fit for this historic neighborhood, supports my vision for Jefferson Ave. and complements other investments that will bring residents and businesses to the Jefferson Ave. Corridor.”

Buffalo Common Council president Darius Pridgen said, “I’m excited to see the construction start for yet another affordable housing project in the Ellicott District. This project is a part of millions of dollars of investment in the Jefferson Business Corridor. As Buffalo continues to revive it is important that all areas experience the revival. This project continues the spread of positive projects that will enhance the area and fulfill a much needed affordable housing demand.”

Rhonda Frederick, president and CEO, People Inc. said, “I’m proud to help move the construction of the Jefferson Ave. Apartments forward, as well as to be part of the historic corridor and the community’s vibrant history. We are so pleased to have the support of many community leaders and organizations, as we work together to provide an affordable housing opportunity for individuals ages 18 years and older. We are so grateful to the several funders and elected officials that are making this project a reality.”