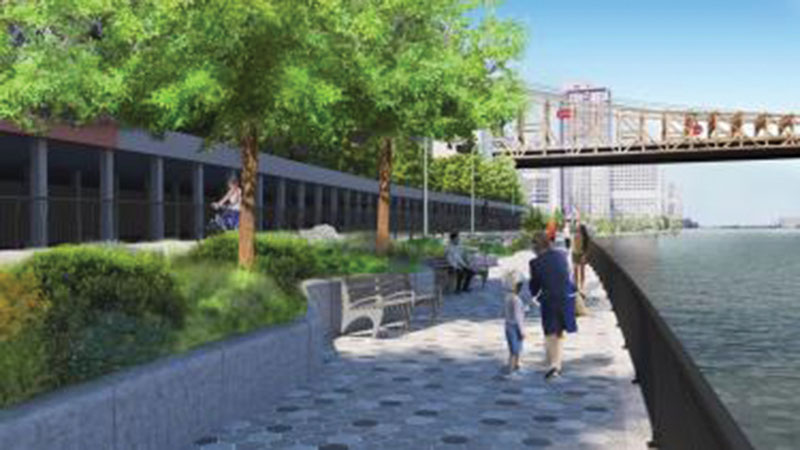 Stantec  provided landscape architecture and waterfront, civil, structural, and electrical engineering for the project. Skanska is serving as construction manager for the project.

“Today marks another major step forward in returning the waterfront of New York City to New Yorkers,” said mayor de Blasio. “I look forward to the day when families and friends can relax and enjoy the East Midtown Greenway—an oasis in the heart of our city.”

The EMG will address the city’s lack of connection to the waterfront for East Midtown communities by creating a continuous 40-ft. wide esplanade over the water parallel to FDR Dr., allowing pedestrians and cyclists to experience water on both sides. The $100 million project, which will create 1.5 acres of new waterfront park space, is expected to be completed by 2022. Once open, NYC Parks will maintain the EMG.

As part of the EMG project, renovations and an extension will be carried out to Andrew Haswell Green Park, which borders the greenway to the north, including a new ADA-accessible pedestrian bridge. Additionally, the project will include a widened area near 53rd St. with space for environmental programming and an art installation created by Stacy Levy that was selected through a public procurement process in 2018.

The EMG will be one of the first major waterfront gaps filled since the opening of the Riverwalk in Riverside Park in 2010. In 2018, mayor de Blasio revealed that the city would invest a total of $250 million to begin closing the remaining gaps in 32 miles of city waterfront esplanade, starting with stretches in Inwood, Harlem, East Harlem, and Midtown.

This strategy will connect communities to their waterfront and add about 15 acres of quality open space, while integrating the Greenway into surrounding neighborhoods.

“The East Midtown Greenway reflects our commitment to ensuring that New Yorkers of all ages and abilities can access beautiful open spaces,” said Been. “Connected by an ADA-accessible bridge, the Greenway will provide all pedestrians and cyclists with a safe and enjoyable pathway along our iconic waterfront. “

“Creating a continuous loop of public open space around the perimeter of Manhattan is key to enhancing quality of life for all New Yorkers by allowing use of the waterfront for enjoyment and safe travel,” said Patchett. “We are proud to be celebrating today’s progress on the East Midtown Greenway and thank all of our partners for their continued support for this important initiative.”

“By closing a gap in Manhattan’s green necklace, The East Midtown Greenway will provide much-needed open space for pedestrians and bicyclists, connect surrounding communities with the waterfront, and enhance our work to restore and beautify the East River Esplanade,” said Silver. “We are thankful for the support of mayor de Blasio and the partnership of our colleagues at EDC and DOT, and we look forward to maintaining this new section of the Greenway.”

“Piece by piece, we are closing the biggest gaps in the East River Greenway, bringing us closer to the goal of providing cyclists with an uninterrupted protected bike path around Manhattan,” said Trottenberg. “We thank Mayor de Blasio and our partners at EDC and NYCParks for their work on this project, which not only helps the Administration meet its Green Wave goals, but gives the East Side the kind of bike connectivity and public space that residents and visitors have long enjoyed along the Hudson River Greenway, the nation’s busiest bike path.”

“New York City wouldn’t be the greatest city in the world without our beautiful and accessible park spaces,” said Mayor’s Office for People with Disabilities commissioner Victor Calise. “With the expansion of the East Midtown Greenway, we are bringing waterfront access to all New Yorkers. MOPD applauds the Parks Department and the Department of Transportation for their commitment to accessibility as we continue to expand our green spaces.”

“For far too long, areas of Manhattan have lacked accessible waterfront public space for enjoyment and safe travel,” said cCongresswoman Carolyn Maloney. “I am pleased to celebrate the groundbreaking of the newest phase of the Manhattan Waterfront Greenway initiative in my district, and I thank the NYCEDC, NYC Parks, and NYC DOT for their commitment to expanding waterfront space throughout NYC.”

“New parks and open spaces are some of the most important investments we can make in our city, and they are desperately needed on the East Side,” said state senator Liz Krueger. “I’m pleased to see ground broken on this key section of the Greenway, which will improve the opportunities for so many East Siders to enjoy fresh air and connect with our waterfront. Thank you to the Parks Department, DOT, EDC, and my elected colleagues for bringing us one step closer to the completion of this vital project.”

“We are ready to break ground on the East River Greenway, and what once was only a dream is getting closer to reality. Soon my constituents and I will finally be able to run, bike or walk the entire length of my district from Midtown East to East Harlem. The new Greenway will serve as a vital connection for all New Yorkers, filling the gap between 53rd and 61st Sts.,” said council member Ben Kallos. “Thank you to mayor de Blasio and to EDC for their combined efforts to make this day possible and for their commitment to investing time money and city resources in the East River Esplanade.”

“We are extremely excited that in the near future New Yorkers will be able to better enjoy one of our island’s best resources, the waterfront,” said Sandro Sherrod, Manhattan Community Board Six Land Use and Waterfront Committee chair “The Manhattan waterfront should be an exciting and engaging destination and now with the East Midtown Waterfront Esplanade it will be. The improvements to our public realm associated with this project have been years in the making and involved so many that it would be impossible to thank them all; but they do have our deepest appreciation. Making the waterfront approachable to New Yorkers has been a priority for our community for decades and we do want to thank this administration for making it a reality.”

“The East Midtown Greenway represents a significant step toward winning a safer and more equitable city that New Yorkers deserve. This new right of way will prioritize people and provide an important and accessible waterfront connection for those biking and walking along the east side of New York,” said Danny Harris, Transportation Alternatives executive director.

“Stantec is proud to support EDC in fulfilling the City’s goal to provide the public with waterfront access, and pedestrian and bicycle connections to completely encircle Manhattan,” said Olga Gorbunova, principal with Stantec. “This dynamic design serves to link the community with the waterfront, offering improved mobility options for pedestrians and bicyclists while creating an aesthetically pleasing and welcoming destination that supports the need to address sea level rise.”

“Skanska is proud to partner with the EDC on the East Midtown Greenway project, which will add more than an acre of new park space for all New Yorkers to enjoy,” said Jeff Rosser, vice president of Skanska. “Building new walkways and bike paths and a new pedestrian bridge will make these public spaces more accessible for those who want to spend time along the East River waterfront while.”

$100M for 8 blocks in Manhattan, on top of $150M for a rink in Central Park and hundreds of millions for Hudson River Park and over a billion for East River Park? We need to invest in more parkspace in Brooklyn and Queens, which lag in parks and parkland per person (Staten Island and the Bronx do well overall but the Bronx needs more neighborhood parks). For an administration that prides itself on equity, the contrast between this expensive boondoggle and the lack of investments in greenways in outer boroughs is glaring.