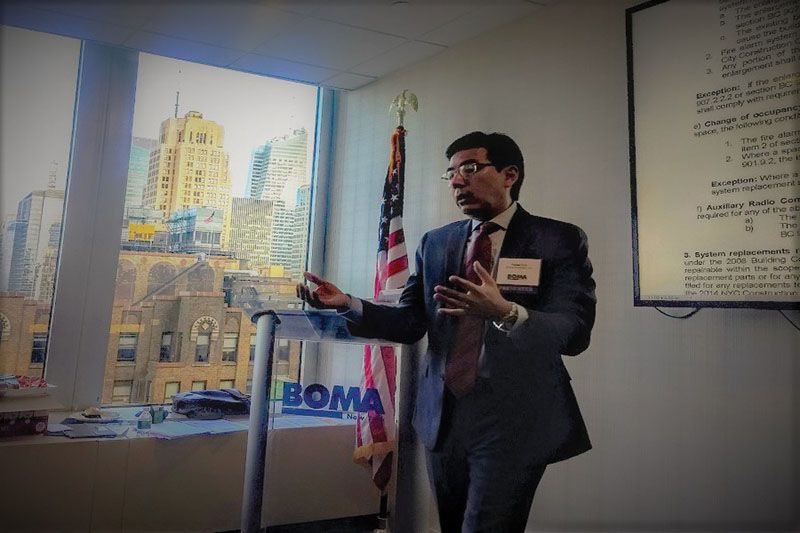 New York, NY The first “Lunch & Learn” of 2020 sold out to a room filled with property managers and engineers to listen to a detailed presentation by Fabian Cruz, PE, PLLC, a consultant of Briscoe Protective LLC. Cruz focused on the specifics of existing codes and building bulletins in order to properly update fire alarm systems in older buildings. He also touched upon how to work with the FDNY to ensure compliance and success throughout the process.

Cruz, an engineer with 20+ years of experience, began by highlighting the most recent Fire Protection Systems code – 901.9.2 (2014) – which details exactly what to do when putting a new fire system into an existing building. However, the 2014 code does not address what to do when updating and/or replacing fire alarm systems in older buildings. On September 9, 2015, the city issued Buildings Bulletin 2015-025, which is the current bible in replacing a fire alarm system in older buildings. The biggest challenge for owners and managers is how to correctly use Bulletin 2015-025 to ensure compliancy.

In order to plan for success, Cruz reminded the attendees that code written for all buildings is related to the registered use and that you must know the occupancy of your building before proceeding with any fire system updates. Cruz asked the attentive audience, “If you don’t know, how do you determine the original use of an old building? Do you have the original certificate of occupancy?”

Cruz said that the first place to look is on the DOB website–type in your address and look to see if your building has an authorization warrant type. The authorization would contain the occupancy.

For very old buildings, where you can’t find an authorization type, the city looks at how the building has historically paid taxes. For example, have they been listed as a business, retailer, school or another usage? If the purpose has been business, the city has no issue with the continuation of the same usage.

After an operator finds the paperwork for usage and occupancy, the next question is, do you have a letter of approval from the FDNY for the existing fire alarm system? This document will tell you exactly what’s in a building and is proof that the current fire system was approved. Any time you do any work to a fire system, you will need to show the initial system approval, as well as recognize the approved occupancy. If you can’t find a letter of approval from the FDNY, Cruz recommended to check the certificate of occupancy, explaining that from about 1989 to 1999, the DOB included fire system approvals within the certificate of occupancy.

Cruz said that these are the first two items the FDNY will look at. If the application does not match the certificate of occupancy and/or the original fire system approval, the process will stop right then and there.

Cruz explained that Bulletin 2015-025 can be an owner’s best friend, if followed properly. He then explained multiple scenarios that the Bulletin addresses.

Work constituting a repair, which is not subject to the 2014 code – includes the replacement of smoke detectors, a junction box and/or a data gathering panel (DGP) – no permit is required, as long as you hire a licensed electrician to do the work.

Alterations that do not constitute a repair is related to the relocation or replacement of a Fire Command Center. The Bulletin says that in order to replace a Fire Alarm Panel, you must use the same sequence, same power and keep the controls within the same proximity. If you stay within these parameters, the FDNY won’t require you to do anything else. Cruz warned the attendees that if the paperwork is wrong, the FDNY will come back to you with a full ask to be compliant with the 2014 code, including a new Auxiliary Radio Communication System (ARCS)–an expensive undertaking.

When an owner is doing a floor alteration and for example will add strobes, detectors and other hardware that the current fire system cannot handle, the fire system for that floor will have to be replaced, per the 2014 code. The Bulletin allows owners to treat a building on a floor by floor basis, versus requiring owners to replace an entire building system all at once. The floor by floor approach allows building owners to control the costs of a full building upgrade, as well as pass the expense on to the new user/tenant. Cruz again reminded the group that even floor alterations assumes that your occupancy matches the city records and a letter of approval for base building systems. He said, “The planning, work and research you do in advance will benefit all stakeholders in play.”

Keep the fire system within the same vicinity.

Install a Class A Redundant Loop by a master electrician. While this addition is a little expensive, it’s significantly less than an entire new fire system per the 2014 code.

Keep the batteries to code–an easy and low-cost requirement to fulfill.

Horns, strobes and speakers have to be connected to the primary panel. Cruz noted that very old systems do not have that capability, but most do and will benefit the building engineers.

The current fire panel should have the ability to connect to building systems in order to shut down HVAC where needed, recall elevators and shut down any fossil fuel source. Cruz explained that insurance companies will also like the added controls.

Cruz also discussed Building Enlargements, explaining that if an owner is enlarging the area, but not the occupancy, they could expand the fire system, as long as the system’s power can handle the addons. The Bulletin further says that if the enlargement evolves a building into a high-rise category (highest occupied floor is above 75 ft.), then that owner will have to comply with the 2014 code.

When buildings change the occupancy, there is no room for interpretation. Cruz said, “When the occupancy changes, it is treated like it’s a new building and a new fire system will be required.”

Lastly, for a mixed-use building, such as a property that has both retail and hotel – the FDNY will require two different fire systems–as usage is different for each and therefore the requirements are different. If the fire systems are similar, the fire department will allow to tie both systems into one panel to better manage the building, accomplished by filing a variance with the FDNY.

Cruz concluded with a strong recommendation, “Make sure you have the necessary building paperwork, know what you have in your building and carefully review applications before submitting to the FDNY. Once you lose control of the process, it can become costly and likely something you could have avoided.”