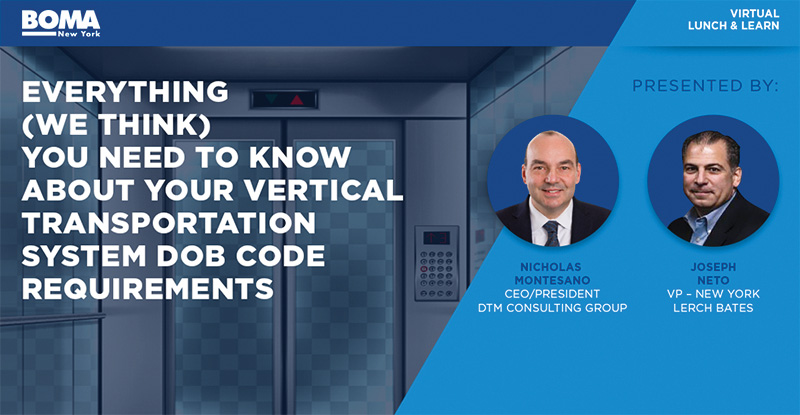 BOMA New York Lunch ‘N Learn: Everything (We Think) You Need To Know About Your Vertical Transportation System

The April edition of BOMA New York’s virtual Lunch and Learn webinar offered a sobering forecast of the tasks that building owners and managers will be expected to perform in order to comply with the City of New York’s increasingly stringent elevator inspection laws – potentially effective on January 1, 2022.

BOMA New York’s guest presenters, Nicholas Montesano, CEO & president of DTM Vertical Systems Consultants, and Joseph Neto, area vice president of Lerch Bates, the global technical consulting firm, delivered a presentation of their best (“we think”) predictions of a near future in which the responsibility for ensuring elevator life safety will fall squarely on the shoulders of landlords.

According to Montesano and Neto, for those of us with a good memory, elevator inspections and safety tests generally have followed the protocols of Local Law 10/81, enacted in 1981 and enforced by the New York City Department of Buildings (DOB). Neto reported that DOB did not have the capacity to deploy City personnel to witness safety inspections as prescribed by the national code (A17.1).

Instead, the DOB contracted private third-party inspectors to perform these PVT safety inspections. If violations were found, there was no immediate charge or penalty. Rather, building owners would have to pay their own contractors to clear the violations and then provide proof of corrections (AOCs) to DOB.

In 2009, the NYC DOB replaced the annual LL-10/81 Inspection with the annual Category 1 tests, which consist of a visual and physical inspection of all equipment, plus a no load, slow speed test of the safety equipment, and requiring an independent third-party witness (Consultant). The new rule also required the Category 5 test, which includes everything in the Category 1 test plus full speed and full load safety tests to be witnessed. If violations were found during the Category 1 tests, owners had 120 days to correct the conditions and provide the DOB with an Affirmation of Correction (AOC). This regulation is also expected to be changed, with Cat 1 and Cat 5 test reports to be filed within 14 days instead of 60 days, and corrections for all deficiencies to be made and AOCs filed within 30 days of the tests for most types of deficiencies.

Keep in mind that the new regulations are not finalized and may involve changes by the New York City Council, in addition to DOB itself. Both Montesano and Neto urged caution in making any final plans about upgrades and modernization of equipment, but strongly suggested to plan and budget now. Montesano said, “Take a field trip to your machine room and make an inventory. This is a life safety issue.”

In addition, both experts called attention to new requirements for secondary/redundant emergency braking equipment that will become effective in 2027. Montesano and Neto said that some machines could accept retrofits with after-market devices, but older machines would probably require outright replacement, which could drive a full modernization costing between $250,000 to $300,000 per elevator.

In many cases, according to Neto, it simply would not be worth the down time and expense to lift out or remove old machines for retrofitting and that modernization would be the sensible option.

In conclusion, both warned that expensive changes are coming and that now is the time to plan for them. They said, “Survey all of your equipment. Adjust your budgets. Talk to your specialists now.”