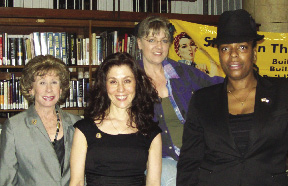 On a recent evening in April women from across the nation working in all facets of the construction industry - from business owners and professionals to tradeswomen - met at the General Society of Mechanics & Tradesmen for a rare, first-of-its-kind event: The NYC Gathering of Women in Construction. The forum was organized to provide women in the industry an opportunity to network, speak and explore ways to deal with the hurdles still faced in a heavily male-dominated field and the incremental progress that is being made.
Key speakers and organizers of the event included: Lenore Janis, president of Professional Women in Construction (PWC); Melina Harris, president of Sisters in the Building Trades; Victoria Dengel, president of the General Society of Mechanics & Tradesmen; Debra Chaplan, coordinator of Women Building California and the Nation; Herlema Owens, president and founder of the Association of Women Construction Workers of America, Inc. (AWCWA); Francoise Jacobsohn of Legal Momentum (The Women's Legal Defense and Education Fund); Jane LaTour, author of Sisters in the Brotherhoods; and Melinda Hernandez, of IBEW (International Brotherhood of Electrical Workers).
Dengel, the first woman president of The General Society of Mechanics & Tradesmen, started the event by welcoming all and noting that since 1858 the Society has been offering tuition-free classes at its Mechanics' Institute for persons employed in the industry who wish to improve their skills and knowledge. "We're here to change lives - we want to help you improve your position in life" she said.
Janis noted that PWC was founded in 1980, a post-Women's Lib time when women were rarely seen on the jobsite. She noted that PWC now has six chapters nationwide, attracts capacity crowds to monthly events and is supported and endorsed by the largest construction companies and public agencies in the City, state and nation. "No matter what obstacles we encounter, we just keep on going, serving as a voice for ALL women in the industry," said Janis.
PWC pioneer member Anne Avenius, the first woman project manager in NYC and also a former student of the Mechanics Institute said, "As a woman I had to open the doors for everybody coming through."
Harris, who was recently named on of ENR's Top 25 Newsmakers of 2010, stressed the importance of strength in numbers, saying "Maybe what 100 women can't do, 10,000 can. If we can hold hands all the way across maybe we can meet in the middle."
Chaplan noted that while now medical and law schools are filled with women, sometimes even representing the majority of students, women still represent only 2.5% of the construction workforce.
Cynthia Long, founder and president of Union Women In Construction & Building Trades, NYC, said, "We need to unite and share strategies in order to be successful and have a coherent safety net of policies to level out the work environment."
Jacobsohn spoke of the need to advocate for women in Washington and ensure that all are heard.
Owens said "We are a powerful group together - we're not going to stand alone ever again."
LaTour stressed the need for making new allies, organizing, gaining visibility, and "getting political will behind us."
Representatives of numerous other organizations and trade unions also attended including the Teamsters; the National Labor College; NAWIC; Suffolk County Women's Business Enterprise; Iron Workers; Greater New York Chamber of Commerce; and NOW NYS.
Tags:
Previous StoryNext Story
Print
PDF