Thru the Lens: Hutchinson Metro Center dedicates memorial, "Freedom is Not Free" 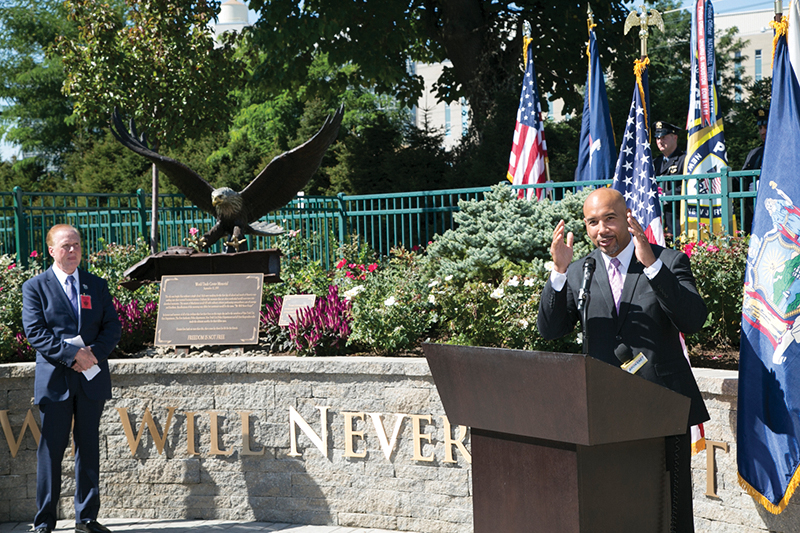 Bronx, NY The Hutchinson Metro Center in the Pelham Bay neighborhood dedicated a memorial remembering those who lost their lives in the terrorist attacks on the United States on 9/11. The new memorial, “Freedom is Not Free,” consists of an eagle with a six-foot wingspan holding the steel that was once part of the Twin Towers. It is surrounded by a plaza and plantings.

According to Kelleher, president of Simone Metro Properties at Hutchinson Metro Center, Simone Development had wanted to create a 9/11 memorial for some time. Recently the owners were able to secure a piece of original steel from the ruins of the World Trade Center. “First and foremost we feel very strongly about never forgetting about what happened on September 11th,” said Kelleher. “This memorial will be open to the public all of the time for people to reflect and to remember, particularly on the September 11th anniversary every year.”

"The new monument is located next to the Marriott Residence Inn in the complex at 1776 Eastchester Rd., and will be a short walk from the Metro North train station that will be built nearby," said Kelleher. "Many people visiting the Marriott, currently the only class A hotel in the borough, are coming to New York to visit the September 11th Memorial and Museum in Manhattan," said Kelleher. “This is just another way of reminding people of what occurred,” he said.

A chance meeting led Simone Development representatives to the steel used in the monument. They were attending an event called Honor Day in New Jersey, a charity event that raises funds to honor service members, said Kelleher. At Honor Day, representatives of the real estate company talked to another group that erected its own monument that offered to help, and the next day Simone Development got a call from the Port Authority of New York and New Jersey.

"They were told that they could have the steel if they would do something meaningful with it," said Kelleher.

“It is an important story to be told and remembered, and we are privileged to be able to do so,” said Kelleher.