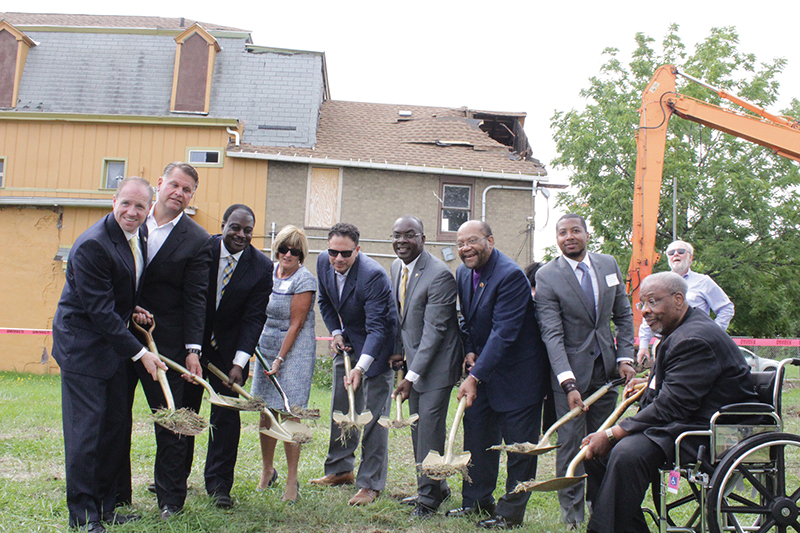 The $24 million housing development at 1144 and 1160 Jefferson Ave. will consist of 84 mixed-income apartments with 16 units to be reserved for individuals with developmental disabilities who live independently. The project is part of a $50 million investment in the city’s east side and will provide a foundation for continual growth on Jefferson Ave. between Dodge and Northampton Sts.

“The success of this project is important because it could be a model for development elsewhere on the east side,” said Nick Sinatra, president of Sinatra and Company Real Estate. “I see it as a catalyst for the redevelopment of Jefferson Avenue. It is big enough in scale to attract other development projects and could be a game changer.”

The vision for the Jefferson Avenue Apartments is to build a community consistent with the city’s focus on diversity and opportunity by providing quality mixed-income housing and a walkable neighborhood with access to services, retail, and public transportation. The apartment buildings will feature both one and two-bedroom units and a community room with a small kitchen, on-site laundry facilities, green space, courtyards and off-street parking. The apartments will also be near a major bus route and easily accessible to a number of services and retail shops. The project will also include approximately 23,000 s/f of flexible first floor commercial space, which will house a small People Inc. recruitment and program services office.

“I’m proud to help move the new Jefferson Apartments site development forward during this exciting time, as well as to be part of the historic corridor and the community’s vibrant history,” said Rhonda Frederick, president and CEO, People Inc. “We are so pleased to have the support of many community leaders and groups as we work together to provide an affordable housing opportunity for seniors, people with disabilities and others in need.”

“From the day I took office over a decade ago, we’ve aggressively supported affordable housing in Buffalo and this project is a great fit for the Jefferson Avenue neighborhood, complementing my Administration’s $50 million investment plan for this community. Since 2006, we’ve invested over $34 million in affordable housing, an investment that has leveraged over $333 million in residential development and the creation of over 1,400 units of affordable housing citywide. I applaud People Inc. for these mixed-income apartments that include units designed to accommodate persons with disabilities, a wonderful new contribution to the historic Jefferson Avenue neighborhood,” said Buffalo mayor Byron Brown.