Glen Cove, NY The $1 billion renaissance of the city’s 60-acre waterfront marked a new milestone with the topping-out of The Beacon at Garvies Point, a 167-unit, LEED-certified condo complex.

The Beacon at Garvies Point, as well as the overall Garvies Point site, is being developed by RXR Realty in cooperation with the city.

City officials and RXR executives were joined by representatives from Hunter Roberts, the site’s construction manager, to celebrate this construction milestone. The architect was Handel Architects.

Scheduled to open by the end of this year, The Beacon at Garvies Point features one, two and three-bedroom residences ranging from 900 to 2,850 s/f in size. The development offers a variety of outdoor spaces, including rooftop terraces at the penthouse level, courtyard terraces, and balconies on nearly every home. Additional amenities include a fitness center and yoga studio, a club lounge, a game room, a party room, a movie theater and an outdoor pool.

The condo buyer’s market has responded enthusiastically to the complex, where sales have now exceeded 45%. The developer has raised prices five times in response to demand, with 65 units in contract and more than $72 million in sales.

“We are proud to celebrate the latest stride forward in the transformation of the long-underused Glen Cove waterfront into a vibrant, active mixed-use community,” said Joe Graziose, executive vice president of residential development and construction at RXR Realty. “We’re appreciative to both the City of Glen Cove and Hunter Roberts for their tremendous commitment to this exciting enterprise.” 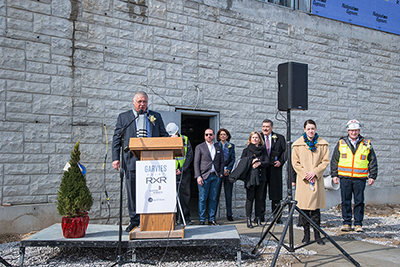 “The topping-out of The Beacon at Garvies Point is another point of progress that underscores over two decades of hard work, perseverance and the outstanding commitment of RXR along with federal, state and local agencies to work with our staff to help Glen Cove reclaim its waterfront.  Through our strong partnership with RXR we are excited to welcome new residents to our city later this year as the Garvies Point redevelopment project represents an important chapter in Glen Cove’s growth,” said mayor Tim Tenke.

“The Beacon is indeed a source of light and inspiration, not only in terms of RXR’s visionary waterfront development, design, and construction, but also for their genuine and enduring concerns for the beautiful marine environment at Garvies Point and the wonderful people of the city of Glen Cove,” said Will DeCamp, senior vice president of Hunter Roberts Construction Group. “This project has created hundreds of construction jobs.  The workforce is 39% local/hyperlocal with almost 70% of the subcontractors local/hyperlocal, thus directly benefiting Glen Cove and Nassau County residents. Our workforce is diverse; more than 75% of the workforce is minority or female.  Hunter Roberts takes great pride in building RXR’s magnificent projects on Garvies Point and is privileged to be part of the RXR team under the superb leadership of Joe Graziose, native son of Glen Cove.”

“The early and ongoing success of The Beacon at Garvies Point has demonstrated beyond a doubt the demand for a low maintenance, high quality, community lifestyle on Long Island,” said Deirdre O’Connell, CEO of Daniel Gale Sotheby’s International Realty.  “We are proud to partner with the RXR team as the exclusive marketing and sales team for this extraordinary concept in waterfront living.” 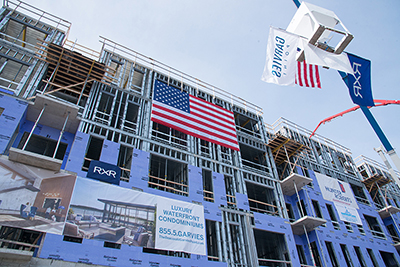 Garvies Point will provide residents with 28 acres of public amenity space, including a one-mile waterfront esplanade with outdoor seating, miles of trails and bike paths, playgrounds, kayak and boat launches, a dog park, a beach and an amphitheater. The unique venue also includes an educational ecology pier and restored wetlands.

Residents will have access to a new, high-speed ferry with direct service to Manhattan, as well as a variety of restaurants, shops and services that will comprise more than 75,000 s/f of retail space at the site.

In addition to The Beacon, Garvies Point also offers Harbor Landing, a 385-unit, two-building rental complex offering a mix of studios and one- and two-bedroom residences ranging from 500 to 1,300 s/f in size. Amenities include an outdoor pool, a fitness center, a club room, a private dining room, a lobby and on-site parking. Harbor Landing is also targeted to open later this year.

As development has progressed on the overall site, Garvies Point has remained on track to generate hundreds of millions of dollars in economic activity, including total gross revenues in excess of $635 million; an annual economic benefit of $50 million to the City; $24 million annually in local spending by new residents; and the creation of more than 460 direct and indirect construction jobs per year during the construction period, as well as more than 540 permanent jobs.