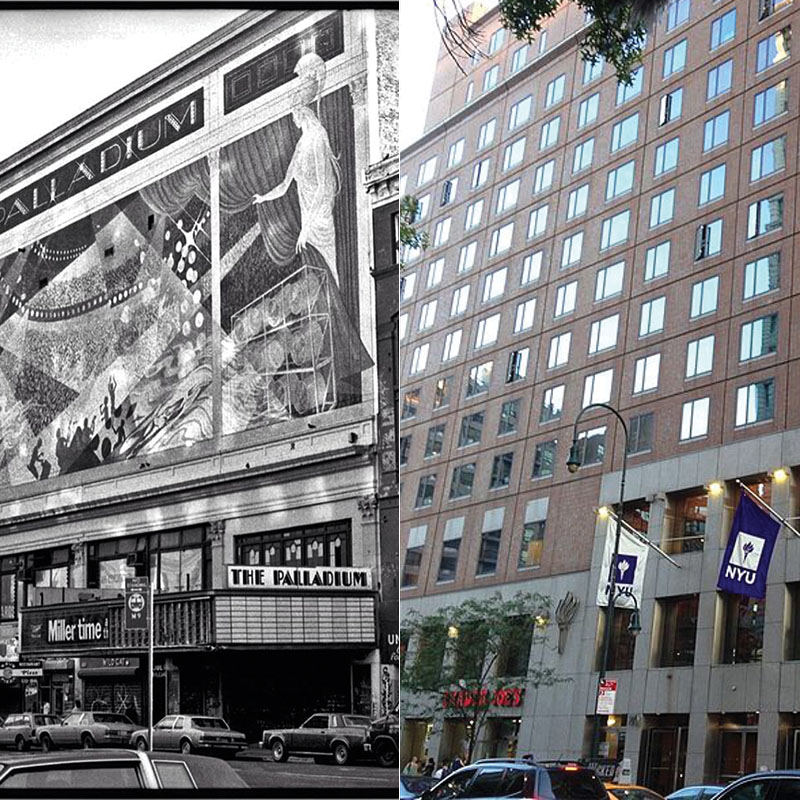 This month’s look at historic past venues that have gone dark and the bricks it resided in, as well as its surrounding neighborhood focuses on the Palladium. Formerly located at 126 East 14th St., on the outskirts of Gramercy Park just east of Union Sq. The structure was built in 1927 as a movie theater palace which operated as such well into the 1970’s. Known as the original location of the Academy of Music, bands such as the Rolling Stones played there as early as 1965 as part of their first American tour. Following the closure of nearby music venue, the Fillmore East in 1971, it became a major stop for major rock acts such as the Allman Brothers, The Band, Blue Oyster Cult, Kiss, Genesis, the Grateful Dead and Bruce Springsteen. It had a seating capacity of 3,000 and was known for its excellent acoustics. In 1976, it was renamed the Palladium and featured other major groups such as Frank Zappa and the Bay City Rollers, as well as heavy metal acts such as Judas Priest, Iron Maiden, Ozzy, Def Leppard, and Motorhead. In its later years new wave acts such as Blondie, the Ramones, the Clash, Roxy Music, U2, Duran Duran and the Boomtown Rats made regular stops there.

Prestigious Gramercy Park got its start in 1831 and was once part of a swampy area that featured a 22-acre site called Gramercy Farm. It was purchased by Samuel Ruggles from the heirs of James Duane, son of the former mayor, father of James Chatham Duane, and a descendant of Peter Stuyvesant. Ruggles, a developer and advocate of open space, drained and landscaped the area which ultimately became a small fenced in private park. It was one of the earliest attempts in the United States at city planning. Possession of the park was deeded to surrounding parcel owners where some of the earliest New York City cooperative apartment buildings such as 34 and 36 Gramercy Park East appeared. As a private park, it is held in common by the owners of the 39 surrounding structures, as it has been since its origin. Keys are allocated to surrounding lot owners and can get quite expensive if lost, where it can cost upwards of $1,000 each. Gramercy is a quiet and stable area bounded by 14th and 23rd Sts., Park Ave. South and First Ave. and is made up by charming townhouses reminiscent of London’s West End residential blocks. Some notable buildings in the area are the National Arts Club, Gramercy Park Hotel and Pete’s Tavern on Irving Place, one of the oldest surviving saloon’s in Manhattan, One of the most famous residents of Gramercy Park was Edwin Booth brother of John Wilkes Boothe, Abraham Lincoln’s assassin. There is a statue of Edwin which remains in the park.

In the mid 1980’s the Palladium was converted into a dance club until 1997 when it was sold to New York University. It was ultimately torn down and turned into a 16-story student dormitory and is commonly referred to as Palladium Hall.