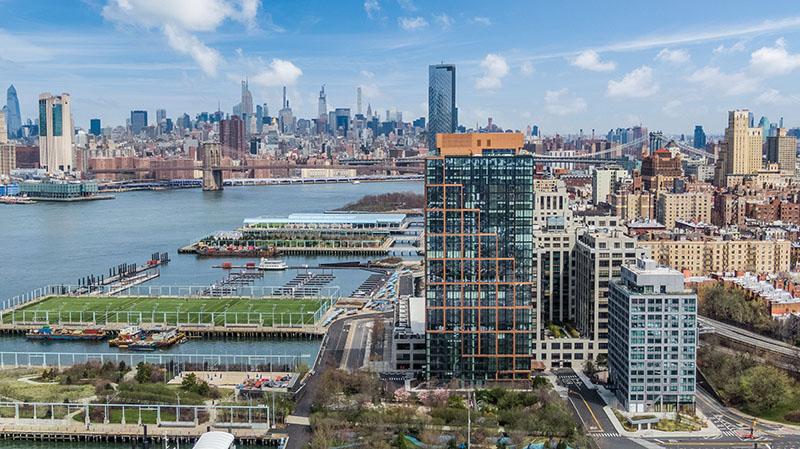 Brooklyn, NY According to RAL Companies and Oliver’s Realty Group, developers of Quay Tower, a new condominium offering at Brooklyn Bridge Park, two locally owned and operated food and wellness retailers have committed to space at the park’s southern end at Pier 6. These new businesses plan to open later this year.

Iris Café will reopen under its original owner—who will also introduce, within the same waterfront storefront, a new, nearly 8,000 s/f specialty grocery store called Town Market. Iris Café and Town Market will be joined by OV Pilates Studio, owned by a local resident. The new tenants will be housed in One Brooklyn Bridge Park and The Landing at Brooklyn Bridge Park, both adjacent to Quay Tower.

“We are thrilled to announce two new retailers coming to the Brooklyn Heights waterfront at a time when the neighborhood couldn’t be prouder of its local businesses,” said Robert Levine, president and CEO of RAL. “With Brooklyn Bridge Park’s 85 acres of parkland as the backdrop, these new additions will complete the lifestyle on the Brooklyn Heights waterfront for residents of Quay Tower and the surrounding buildings.”

“These new businesses committing to opening their doors and doing so at the southern end of the park is an important statement,” said David Wine, managing partner at Oliver’s Realty Group. “With the robust residential offerings nearby, retailers are clearly recognizing the vibrant, residential neighborhood that has emerged along the waterfront and will continue to be one of the most desirable locations in the borough.”

Ryan Condren and George Danut of JLL represented the landlord and procured all tenants. The Iris Café/Town Market lease signing puts ground floor occupancy at One Brooklyn Bridge at over 80%

Neighborhood favorite Iris Café, formerly located on Columbia Place, will reopen on the southern side of One Brooklyn Bridge Park and will be connected to the new Town Market, which will offer locally sourced options and family favorite brands. Radi Hamdan will operate both businesses, delighting both old and new Brooklyn Heights residents.

“I am thrilled to bring back a neighborhood classic,” said Mr. Hamdan, adding that he is excited to introduce residents to his new grocery concept. “My family has been in the grocery business for generations, and I thought this was the perfect place to continue that legacy and return to the neighborhood I love.”

The Landing at Brooklyn Bridge Park, located directly across the street from Quay Tower at 15 Bridge Park Drive, houses 140 rental units and was also recently completed by the same developers. OV Pilates Studio has leased 885 square feet at The Landing and will be owned and operated by a local resident, offering both private and small group lessons. The developers are building out another 2,400-square-foot retail space at The Landing for childcare use. Mr. Levine noted that there are ongoing discussions with several Brooklyn-based operators for that space.

Located at the southern end of Brooklyn Bridge Park, Pier 6 offers an integrated, active lifestyle for residents and visitors alike. Recreational and fitness amenities include sand volleyball courts, five themed playgrounds, a dog run, and a private marina. The new tenants will join the roster of beloved local retailers at One Brooklyn Bridge Park, including Waterfront Wines, which is currently offering delivery in the neighborhood, as well as Ebb & Flow – an elevated bakery concept developed in collaboration with James Beard Award-winning pastry chef Francois Payard – that is offering a full menu for pick-up and delivery.

The demand for this residential community started with the development of the immensely successful One Brooklyn Bridge Park, which launched sales in 2007 and was developed by RAL Companies. The transformation of Pier 6 was completed with Quay Tower, which recently started closings, and the upscale rental building The Landing. Both were also developed by RAL Companies, in partnership with Oliver’s Realty Group. Together, these residential communities contain more than 700 residential units with over 2,000 occupants.