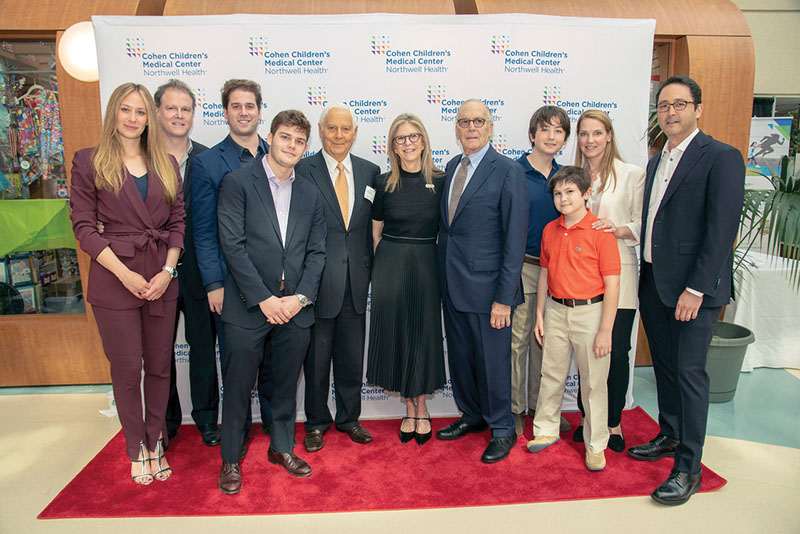 The newly-named Blumenfeld Family Pavilion opened in 2013 and houses the Rudolph Emergency Department, Long Island’s only pediatric dedicated Emergency Department and home of its level 1 pediatric trauma center. The Pavilion is also home to the Children’s Medical Fund Center for Diagnostic Studies, the only pediatric-dedicated MRI unit on Long Island, and is the future home of the Pediatric Surgical Operating Complex.

“No person stands as tall as when he stoops to help a child,” said Ed Blumenfeld.

Their advocacy and support also led the Blumenfelds to create the Children’s Medical Fund of New York to help engage the community in philanthropic support of Cohen Children’s. The Fund hosts an annual golf outing and a children’s fashion show to grow support and help increase awareness of the hospital.

“Through their own philanthropy and their considerable efforts through the Children’s Medical Fund of New York, the Blumenfeld Family has helped to make incredible things possible for the children in our care,” said Charles Schleien, MD, senior vice president and chair of pediatric services for Northwell Health. “Their support of the construction of the marquee project of our expansion of the Blumenfeld Pavilion – the Pediatric Surgical Operating Complex – will bring eight operating rooms of the future and a 26-bay recovery unit on site to provide children life-saving procedures like kidney and liver transplants, spinal and robotically enhanced neurosurgery. We are deeply grateful for their involvement in this transformational project.”

“There are few families that are part of the fabric of a hospital like the Blumenfelds are to Cohen Children’s and the programs we offer,” said Mark Claster, chairman of Northwell Health’s Board of Trustees. “The longevity of their involvement with Cohen Children’s is truly unparalleled. We are extraordinarily grateful for her generous support.”