No man's land to NoMad: The invention of a neighborhood 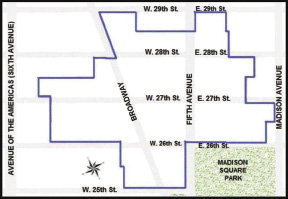 Part 2 of 6:
Madison Square Park:
Where It Begins
The Madison Square North Historic District lies north and west of Madison Square Park, and the district's boundaries are irregular. The main southern boundary is 26th St. between Madison Ave. almost to Sixth Ave., but a portion of 25th St., from Fifth Ave. to somewhat west of Broadway is included. On the north, the district goes no further than 29th St., but portions of it stop at 28th St. or between 27th St. and 28th St. From east to west, the district is entirely between Madison and Sixth Aves., without encompassing the entirety of any of these blocks.
According to the Commission's Designation Report, the District: "consists of approximately 96 buildings representing the period of New York City's commercial history from the 1870s to the 1930s when this section prospered, first, as a major entertainment district of hotels, clubs, stores and apartment buildings, and then, as a mercantile district of high-rise office and loft structures."
Nomad... double entendre?
By definition, a nomad is "a person with no settled home, who moves from place to place as a way of obtaining food, finding pasture for livestock, or otherwise making a living. Most nomads live in tents or other portable shelters. Upon surveying the lobby of Nomad predecessor the Ace Hotel, the literal meaning of the word comes into focus. The guest profile of the Ace was once described to me by Michael Suomi, principal, design & marketing director of Stonehill Taylor as "backpacker with a trust fund." These nomads, however, have designer vagabond duds. Suomi was responsible for The Ace's architecture, as well as the architecture and historic preservation of The NoMad.
Who coined the name?
The term NoMad has been floating around since the late '90's, and was first brought to wider attention in an August 1999 New York Times article by Elaine Louie entitled "The Trendy Discover NoMad Land, and Move In." According to the article, at that time the fashionistas were moving into the unfashionable neighborhood, where "an occasional prostitute still hovered around the corner of Lexington Avenue and 27th St." Danny Meyer opened Eleven Madison Park and Tabla in 1998, and Madison Square Park was revitalized in 2001. The Ace Hotel created a unique destination upon it's opening in 2010, which was the tipping point. "It's like a hot-neighborhood starter kit," one broker was quoted as saying in reference to the Ace. When plans were first unveiled for the Nomad Hotel in 2008, they announced that the hotel would be located in "the newly established NoMad district," which "consists of upscale residences, retail shops, creative agencies and renowned restaurants." Yet at the time, there really was no official neighborhood called NoMad. Another influential article later appeared in April 2010 in New York Magazine called "Soho. Nolita. Dumbo. NoMad: Branding the last unnamed neighborhood in Manhattan." Credit is largely due to Andrew Zobler of The Sydell Group (formerly at GFI Development) for branding the neighborhood, and better yet, making it stick. In that article Zobler was heralded in the same context as Chester Rapkin, a University of Pennsylvania professor and urban-planning expert who named SoHo, and David Walentas, who created and owns much of DUMBO. (To be continued.)
Ron Cohen is chief marketing officer of The Besen Group, New York, NY. Follow him on Twitter @NYCRon126
Tags:
Previous StoryNext Story
Print
PDF