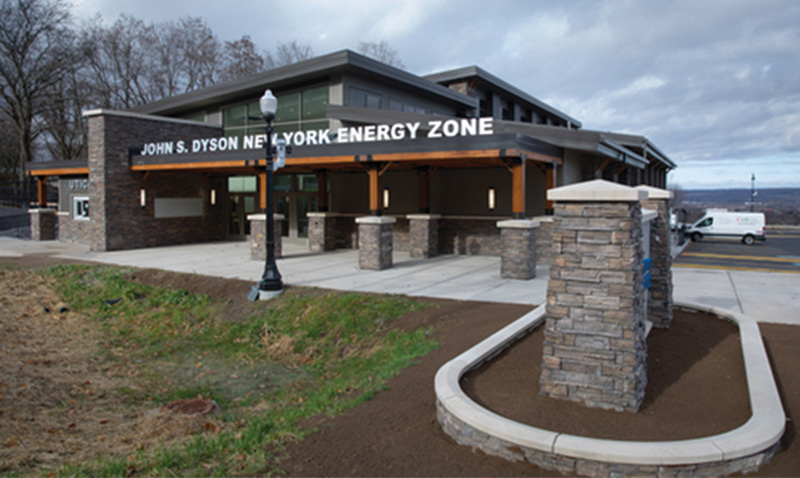 Utica, NY A new 15,000 s/f New York State museum of energy has been completed. Located next to the Utica Zoo, the newly constructed admission-free John Dyson New York Energy Zone, designed and financed by the New York Power Authority, opened to the public on May 10th.

The facility features exhibits that simulate flying a drone to check on power transmission lines, controlling electricity on an energy grid, operating a power plant, and building a micro power grid along with many other interactive activities designed to teach visitors about the past, present and future of energy in New York State.

“New York has an incredible story to tell about its role in the development of electricity, dating back to when Thomas Edison first lit up Manhattan in 1882, and now we have a stunning new facility in the heart of our state to highlight this storied history to residents and visitors alike,” gov. Cuomo said. “The John S. Dyson New York Energy Zone in Utica could not have come at a more exciting time as the energy industry continues to evolve before our eyes. Every day we are moving toward a clean energy economy, and this new facility will inspire future leaders in this booming industry to help us address our clean energy challenges and meet the goals we’ve set as part of our ambitious climate agenda.”

Exhibits throughout the museum reflect input and information from New York’s major private utilities; NYPA’s sister agency, the New York State Energy Research and Development Authority (NYSERDA); and the New York Independent System Operator (NYISO) as well as industry trade groups. Each entity shares its role in the energy and electricity story of New York State that is highlighted throughout the Energy Zone.

Named after former NYPA chairman John Dyson, the new facility is affiliated with NYPA’s Frederick Clark Energy Center — the hub of its statewide power transmission control center located in Marcy. The two-story facility features a 3D feature film about Nikola Tesla directed by Douglas Trumbull, known for his work on 2001: A Space Odyssey (1968), Close Encounters of the Third Kind (1977), and Blade Runner (1982). The film showcases the contributions of Tesla and other famous inventors from the past, returning Tesla to the present to introduce him to the amazing electrical achievements and opportunities of today that have been made possible by his work.

The facility also is home to a STEM Lab — a space dedicated to science, technology, engineering, and mathematics and focused on student learning. The STEM Lab’s programming will be developed in partnership with local educational entities with an expertise in STEM and will host hands-on educational experiences and special events.

Anthony Picente Jr., NYPA trustee and Oneida County executive, said, “Utica is a natural location for this museum of energy because it complements the work of our Frederick R. Clark Energy Center, NYPA’s system-wide energy transmission complex in Marcy. I am grateful to my colleagues at the Power Authority for their vision in conceiving and developing this magnificent facility in Oneida County that will inspire our next generation of energy leaders and benefit all New Yorkers for decades to come.”

Gil Quiniones, NYPA president and CEO, said, “The Utica area is home to many of NYPA’s dedicated and talented employees and today we recognize them and invite them to share this crown jewel of energy and electricity education and interactive, hands-on exhibits with their friends and families. I’m honored to dedicate this building in honor of John S. Dyson, a distinguished former chairman and trustee of the Power Authority. This New York Energy Zone is the embodiment of John’s legacy of public service and his record of improvements to New York’s energy system. We, at NYPA, hope that people of all ages will visit the Energy Zone to learn the fascinating history of power in New York State and will look with promise toward the future as we continue to move toward a clean energy economy.”

Utica mayor Robert Palmieri said, “Due to hard work and coordination with many partners, I am excited to welcome the New York State museum of energy to Utica, which is now formally dedicated as the John S. Dyson New York Energy Zone.  This facility will be a tremendous asset for our community as it will educate and inspire our residents and serve as a destination for visitors from across the state and country. I thank NYPA for their continued investment and support.”