Montauk Lighthouse restoration and bluff revetment in the works 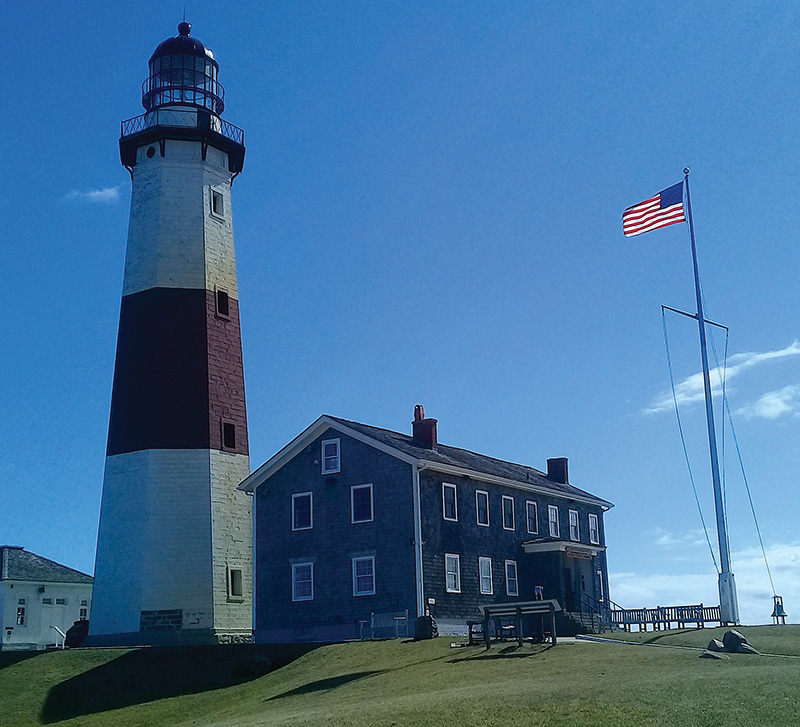 The Montauk Lighthouse, on Long Island’s easternmost point, is beginning to enjoy the greatest efforts to preserve it since it was built in 1796 on orders from President George Washington. Standing 110 ft. tall and exposed to the constant assaults of extreme weather, the Lighthouse tower and the very land it stands on have been severely threatened by the elements. But two major restoration projects are in progress, and they promise to save this historic structure for future generations.

The Lighthouse is a federal aid to navigation that has been steering ships to safety for 225 years, its beacon visible over 19 nautical miles. Today it is owned by the Montauk Historical Society, a 501(c)(3) nonprofit organization wholly responsible for funding its upkeep, which it achieves through entry fees, gift-shop sales, and generous donations. As water damage to the tower became an issue, the Historical Society formed a restoration committee, chaired by Nicholas Racanelli of Racanelli Construction Co., Inc.

In 2016, a feasibility study was conducted by International Chimney and BCA Consulting Group, along with additional engineering review. It found that the structure was in urgent need of restorative measures to prevent its further deterioration. In special need of repair were the Lighthouse’s distinctive lantern and metal work. Water had seeped into corroded portions, permeating the cavity between the tower’s inner and outer walls, and then freezing. Significant cracking, bulging, and spalling of the structure’s original stones resulted. Installation Specialties Group, specialists in historic renovation and preservation work, along with ARI Tech Rep, Inc. providing oversight, were engaged to conduct the restoration project, which began in 2019. 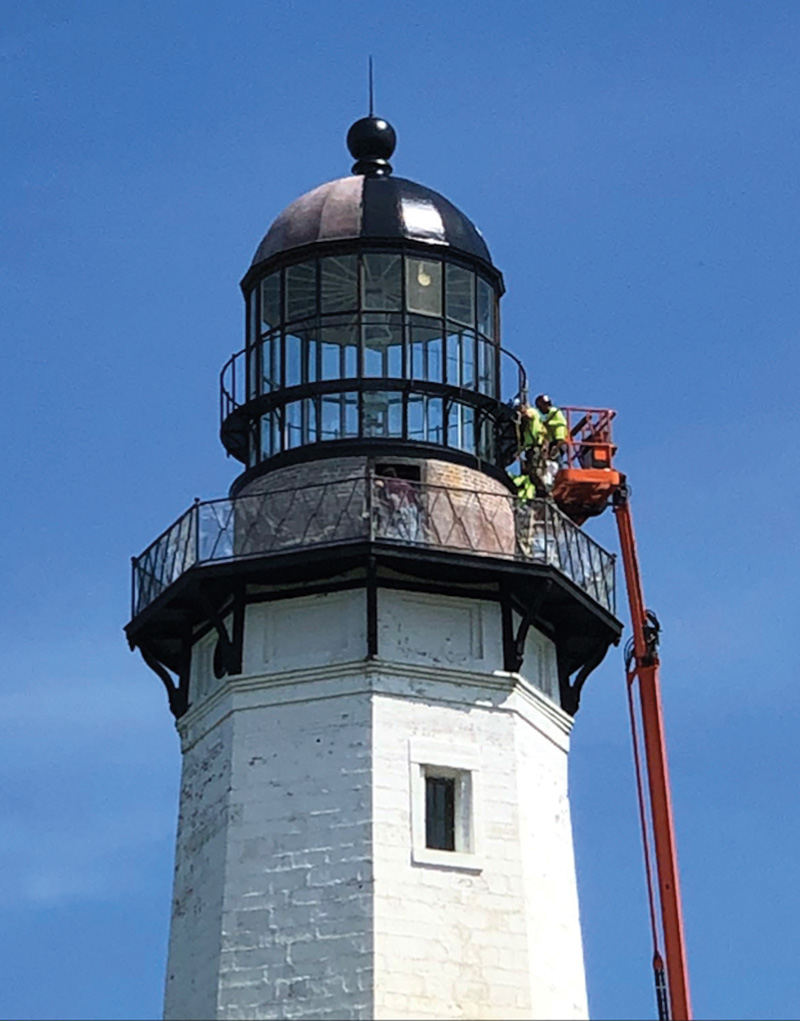 The first phase of the project, which was completed in 2019, focused on restoring the tower’s uppermost part, from the lightning rod, vent ball, and upper and lower catwalks to a brick addition built in 1860, which increased its height by 30 ft.

The second phase, now underway, includes the renovation of the structure’s sandstone and mortar joints, a task that requires the skill of highly trained masons. Paint on the tower is being stripped and hard Portland cement mortar used for prior repairs is being removed. In its place will be malleable lime putty mortar, premixed for the application and applied to repoint the mortar joints.

In the third and final phase of the project, the tower’s sandstone structure will be cleaned, repainted, and sealed using a Keim mineral-based coating which is compatible with mineral substrates and will provide protection against humidity and condensation problems.

To complete the lighthouse restoration project, a budget of $1.3 million was set. A NYS grant of $438,500 has been secured, and the rest of the budget will be generated through fundraising. The entire restoration is slated for completion in 2022. 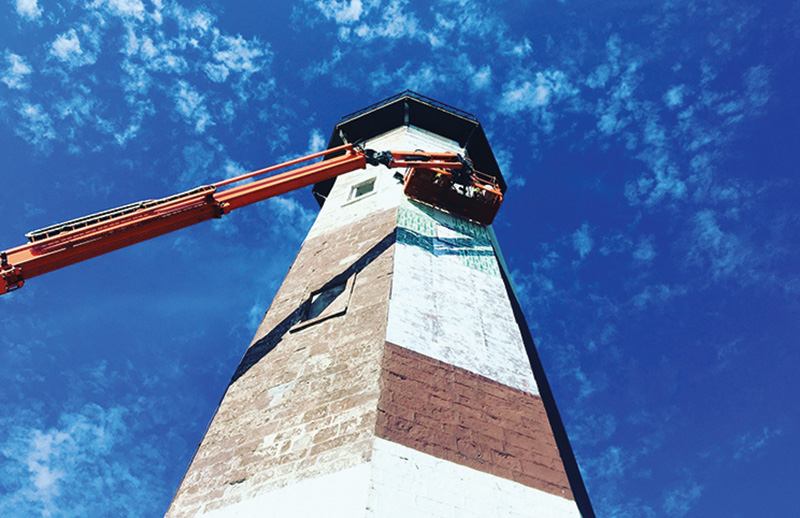 The Montauk Lighthouse is located on Turtle Hill at the eastern tip of Long Island, less than 100 ft. from the edge of the cliff. The shoreline beneath it has been subjected to constant attacks by fierce weather and high seas. Since World War II, multiple seawalls have been constructed to try to stave off erosion, but none was extensive enough to solve the problem. By the 1970s, there was a clear danger of the Lighthouse disappearing into the Atlantic Ocean if immediate measures were not taken to shore up the bluff. Giorgina Reid, a textile designer, is credited with saving the Lighthouse from destruction. She and a team of volunteers worked together on the cliff for 15 years, deploying her patented Reed Trench Terracing Technique, which markedly slowed down the erosion. The tremendous public support for saving the lighthouse led Montauk homeowner Paul Simon to hold his legendary “Back to the Ranch” concert here in 1990, which also featured Billy Joel. The concert’s proceeds were donated to aid in controlling erosion around the Lighthouse.

But while the erosion measures that were taken over the years did have an impact, it became clear that a more comprehensive project was needed to protect the Lighthouse. In January 2021, the U.S. Army of Engineers, in conjunction with the New York State Department of Environmental Conservation, announced the award of a $30.7 million contract to create a revetment at Montauk Point. Scheduled to begin this Spring, it will consist of 65,000 tons of boulders being placed along a stretch of approximately 1,000 linear feet of shoreline, along with slope stabilization, achieved with terracing and vegetation planted above the rocks. As the steward of the Lighthouse, the Montauk Historical Society will be the local arm of this ambitious project, responsible for monitoring the revetment and maintaining the site upon the project’s completion.

Completing the restoration of the Montauk Lighthouse will require financial support from the business community and private sector. As an institution that draws thousands to Long Island and helps drive the local economy, especially during the summer months, it is important that New York’s oldest lighthouse receive the support of the community when it needs it most.