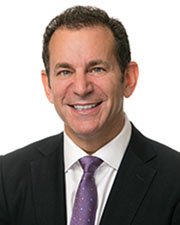 When I read the book, “Rich Dad Poor Dad” by Robert Kiyosaki I thought about my “two Dads.” The book described his real father (poor dad) and the father of his best friend (rich dad)—and the ways in which both men shaped his thoughts about money and investing. In my case, both of my dad’s were poor at the time.

In 1973, I lived in Plainview and my father, Milton, sold life insurance. I remember when he said to me, “Ron, you’re going to meet a very important real estate man this Saturday night and you should pay close attention to everything he says.” That Saturday night I met Vincent Polimeni and I heeded my father’s advice.

My two dads shaped my thoughts on money and commercial real estate. I was close with Vince since I was nine years old. I ran my company in his office from 2001 to 2006 before having my own space on 600 Old Country Rd., an office building my Dads partnered on. Although, sadly, Vincent Polimeni passed away in 2013, my family is still partnering to this day with the Polimeni family on commercial real estate deals.

Vince taught me a lot of things but decades ago he taught me, “Nothing advertises a building, like the building itself.”

Recently I was assigned as the exclusive broker for the sale of 313 West Old Country Rd. in Hicksville. The building had to be sold quickly, as the pandemic was forcing shutdowns and I didn’t want to let my seller down.

I heard Vince in my head, “Nothing advertises a building, like the building itself.” So I convinced the seller to allow a 12-foot sign on the building with my name and cell phone number, to capture the 39,000+ car count. But I didn’t stop there. I recorded a virtual tour to safely showcase the building’s strengths and, as always, I kept a “Top 10” list of why I love this building to simply explain to buyers why this was a great deal.

Putting my cell phone number on the sign and a virtual walk through is something I have never done before. Vince gave me the conviction to get this done. In the end, we successfully sold the vacant office building for $2.45 million–or $490 per s/f–in the middle of a pandemic.