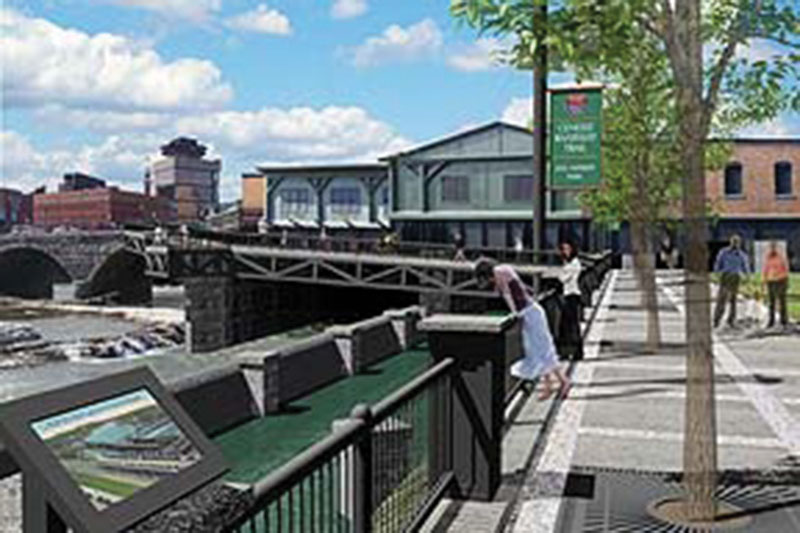 The project completes a missing segment in the city’s Genesee Riverway Trail system by extending the trail through a compact, privately-owned urban parcel, adjacent to a proposed apartment building and the Genesee River.

“With ROC the Riverway, we are assembling a puzzle that is going to create a beautiful new picture along the Genesee River through downtown, and the Erie Harbor Promenade Pedestrian Bridge represents a major piece of that puzzle,” said mayor Warren. “I am grateful that gov. Cuomo and all of our partners in Albany share our vision for the job-creating, community-building potential of the mighty Genesee River and I want to thank New York secretary of state Rosanna Rosado for supporting the Promenade Project.”

The new pedestrian bridge affords new views of the Genesee River and is part of the larger, $4.5 million Promenade at Erie Harbor Project, which also includes work on the cofferdams, river and raceway walls, the promenade and overlooks, landscaping, sidewalks, and railings. The new pedestrian bridge will connect Court St. to the Promenade at Erie Harbor Park, which is nearing completion along the riverfront parallel to South Ave. between Court St.and the Frederick Douglass-Susan B. Anthony Bridge. With its central location, the bridge will link important ROC the Riverway projects that will be built along the Riverway Trail, including the ROC City Skate Park to the south and the re-imagined Broad St. Aqueduct to the north.

The promenade interfaces with several National Register eligible structures including; the Johnson & Seymour Raceway, the Court St. masonry arch bridge, the former Lehigh Valley Railroad Station (now the Dinosaur BBQ restaurant) and the Court St. Dam. The project fulfills many goals for the city including increasing public waterfront access, serving as a catalyst for the private development and providing a backdrop for public education of the rich transportation heritage of the project site.

Gov. Andrew Cuomo has dedicated $50 million under the Finger Lakes Forward initiative to launch the first phase of the ROC the Riverway program with 13 transformative projects. Funding for the Promenade project was provided by the New York State Department of State under Title 11 of the Environmental Protection Fund.