Executive of the Month: Malcolm Punch, TSC site safety
supervisor: All about helping people, by keeping them safe

Being the person a friend turns to for advice, the colleague ready to pitch in when a crisis mounts, comes naturally to him. Other values shaping Punch were ingrained in him by his parents: put your trust in education; insist on integrity.

“My parents escaped poverty through education. They lived the American Dream,” said Punch.

His mother was raised in Puerto Rico. She came to the United States alone, studied hard and advanced to NYU graduate school through scholarships, receiving a masters degree in Social Work.

His father spent part of his adolescence in an orphanage in the Bushwick section of Brooklyn. He joined the Marines, got a scholarship through the GI Bill, and earned his masters’ in Social Work at Columbia University.

Punch and his sister were raised in the middle-class community of Queens Village. In his teens, he worked as a youth camp counselor during the summer.

“My inclination was to help people,” he said. “I was there for the kids, ready to listen.” Like his parents, he wanted to make a career out of advising 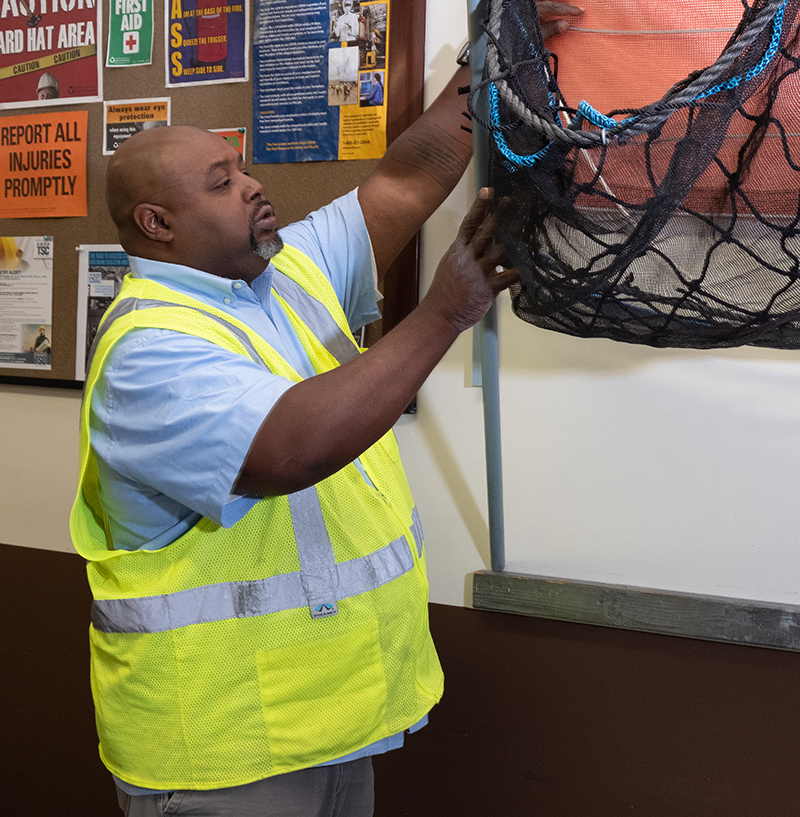 others and planned to become a psychiatrist.

After receiving a B.S. in Biological Science at SUNY at Old Westbury, Punch questioned the wisdom of spending years in medical school. When a job for a public health sanitarian with a background in biology came up with the NYC Department of Corrections’ Environmental Health Unit, he took the position and was stationed on Rikers Island. He was in charge of meeting the health codes for all from food to meds to facilities. He evaluated and abated environmental emergencies, gauged air quality, conducted noise audits, and performed quality assurance assessments.

“I thought inmates were forgotten people, but I learned that there are standards that had to be complied with,” he said.

Within a year, he moved to the NYC Department of Design & Construction (NYCDDC) as a site safety and health and safety inspector. On Punch’s day two at the DDC, 9/11 occurred and he immediately became part of the cleanup and recovery effort.

“I was there when the rubble was analyzed. I stayed until the last piece of steel came out,” he said.

Through site safety classes at what was then the TSC training center, now expanded into the TSC Training Academy (TSCTA), he met a TSC instructor, the late Albert Rivera, who became his mentor and is a man Punch called “a legend at TSC.” Rivera encouraged Punch to join TSC, telling him that every employee is treated like family. 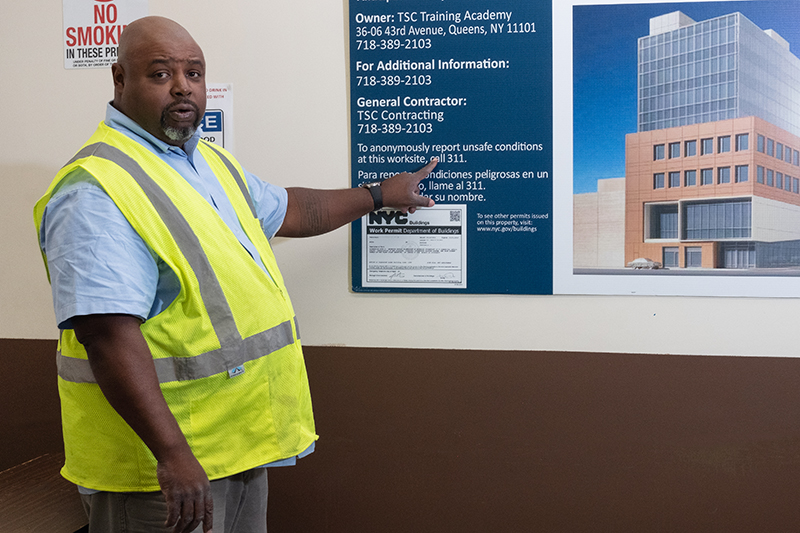 After gaining his Site Safety Manager (SSM) license, he was hired by TSC managing principal James Bifulco who welcomed him into “a growing company that I could become a part of.” As an SSM and loss consultant, he supervised compliance with all rules and regulations at projects in the five boroughs. Punch conducted regular safety audits, ensured that site safety plans are present, and maintained daily logs to ensure that any violations such as unlicensed equipment operators, missing permits, and unsafe sidewalk sheds and standpipes were corrected immediately.

“I saw right away that at TSC integrity is paramount,” he said.

His years with public agencies helped him interact with the NYC Department of Buildings (NYCDOB), Department of Environmental Protection (DEP), and OSHA. He was eager to show workers the value of safety as he always remembers an experience seeing a worker crushed to death when a piece of machinery fell on him.

“It could have been prevented. He didn’t follow the safety plan,” said Punch. “I tell workers: We’re not in a war zone. We’re building buildings. Time is money and millions are at stake, but no building is worth a life.”

He said, “Life takes you 360 degrees. At TSC, I ended up doing what I always wanted to do: help people. I instruct. I remind. I govern.”

He once insisted that a worker tie-off despite the man’s resistance. The worker did fall and ended up dangling in the air from a harness: The safety protocol saved his life.

“When you fall there’s no time to think. You hit the ground,” said Punch. 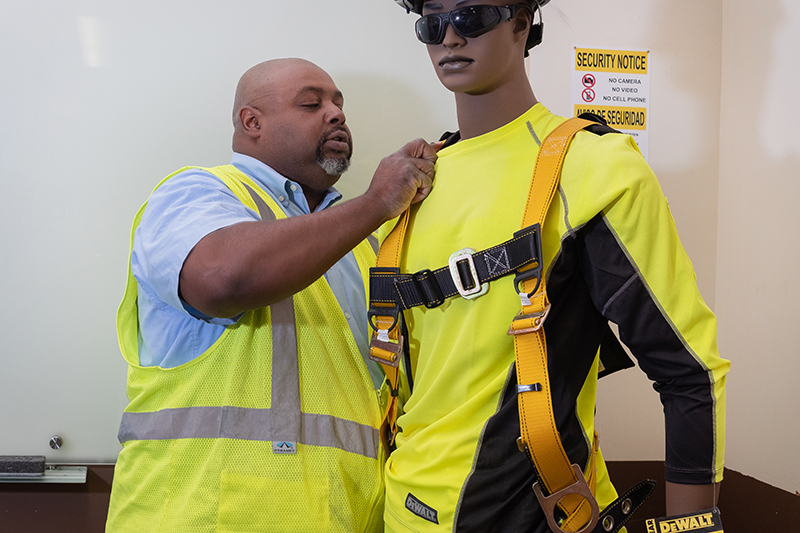 Since joining TSC, he has been encouraged to continue his education and training. He obtained multiple certifications including one as an OSHA trainer and earned a masters’ degree in Occupational Health and Safety Engineering through night classes at New Jersey Institute of Technology (NJIT).

In 2014, he was promoted to TSC site safety supervisor. He “manages the managers” with 20 SSMs reporting to him throughout the boroughs in many of the city’s major buildings. When a complex code question or a situation of imminent danger arises, Punch deals directly and candidly with the contractor.

“We call the balls and strikes,” he said.

The immensity of the responsibility never daunts him. “I want to expand my career and grow,” he said.

He works from 7 a.m. until 6 p.m. daily, covering nights and weekends when needed. He drives from site-to-site, visiting two to three each day and is in constant contact with all SSMs. He carefully follows TSC record-keeping of daily logs and detailed protocols which, he notes, “go above and beyond the requirements for reports, checklists and accident investigations We are extremely thorough in finding the root cause.”

Punch has developed a deep respect for construction. “I like to see an empty lot, then a 60-story tower and know I was a part of the process,” he says.

The WTC site is special as he played a role in the cleanup and saw it being rebuilt.

“I saw the anguish, the loss of life, the work of the NYPD and NYFD. Now the towers are stronger and better than before,” he says.

As a Yankee fan, Punch was proud to be part of the demolition of the old stadium and the construction of the new one.

Punch is glad to be part of a one-stop safety company that continues to grow through enhanced medical services, training and supplies. He appreciates being able to secure needed equipment quickly through TSC’s Safety Supplies Unlimited (SSU) division. “A wide array of services is available,” he said.

He foresees TSC branching out along the eastern seaboard. “As we learn more about safety as a society, we learn the best ways to implement rules and regulations. Safety isn’t going away. TSC is a growing company and, as an integral part of the management team, I’m growing with it,” said Punch.