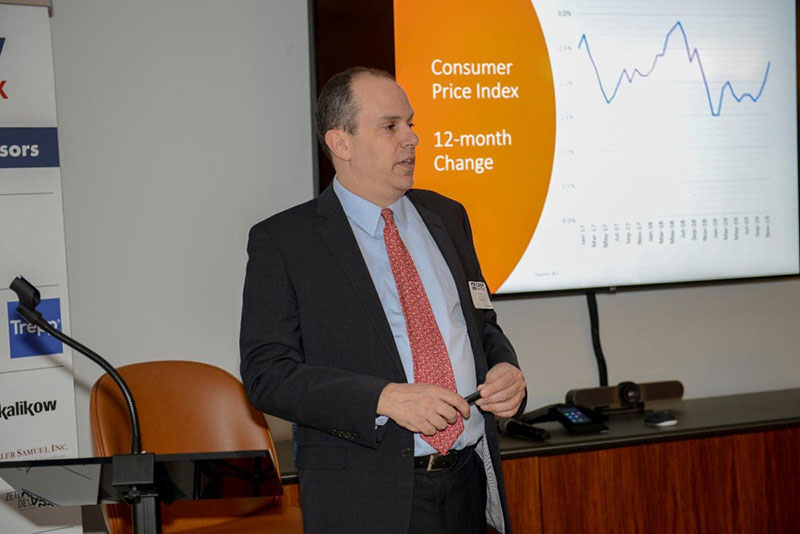 When CREWNY guests gathered at the offices of Trepp, LLC, on January 30th, Heym discussed 2020 economic projections. “The largest influence on real estate currently,” Heym said, “are the federal policies and the uncertain government landscape. In the politically unstable election year, buyers are likely to proceed cautiously.” Heym, who is the chief economist for Terra Holdings,  advised the group on what to look for when trying to predict the health of the economy. “The key is not to watch the daily numbers but to look at the trends over time. Watch what inflation is doing and especially keep an eye on what is happening in the federal government.”

At the “Diversity and Inclusion in Real Estate” luncheon, the panelists discussed how diversity and inclusion are a major priority, not only within their firms but across the real estate industry. Allison Robin, principal at Levien & Co. and 2020 president of CREW New York, said, “Unbiased training and confronting your own bias is so important to not only CREWNY but to the real estate industry as a whole. Now is the time to be making the change! Not only is it the right thing to do, but it’s the smart thing to do.”

Pope has had more than 15 years experience working with and sourcing diverse, capable vendors for projects, such as the Upper Manhattan Pre-Apprenticeship program for Minority, Women and Upper Manhattan workers in conjunction with Pathways to Apprenticeship (P2A), The West Harlem Development Corporation and the City of New York. Leading the discussion, she asked the panelists, “How do we move toward parity of men and women in the workforce?” Harrison stated that in her role — in which she designs, develops and implements globally diverse supplier policies — she has seen that the process starts with the recruitment perspective being more diverse. From there, a sense of belonging and creating an inclusive environment is imperative.

Family demands disproportionately affect women in commercial real estate as it does in other professions. Dodd explained that the family benefit initiatives at Cushman & Wakefield allowed him to share in the parent “job” distribution that traditionally falls to the women in the family. Because of this 10-week paternity leave, his understanding and appreciation of the parent role changed and showed the importance of structure and policy changes that should be soundly in place in companies.

But, creating the policies won’t be enough. Creating a culture where women, and men, feel they can take full advantage of the policies is where success can truly be observed. After all, what good are policies if the company culture frowns on the individuals who follow them? Dodd currently leads the New York Tri-State Region, with a team of more than 5,000 professionals who drive client service delivery standards and financial performance. Deeply focused on Diversity & Inclusion at Cushman & Wakefield, Dodd is a member of the Women’s Integrated Network (WIN), Gender Equality Task Force and a senior sponsor for the WIN Mentoring Program.

As the discussion veered toward how to ensure your partners follow through on their diversity promises, Woodlief explained that she believed changing the landscape in how private and public sectors work together will be essential in raising the bar. “The key is small businesses and getting to know your community.” Woodlief has successfully developed and/or implemented robust compliance programs nationwide, engaging owners, agencies, clients, business enterprises and the trades.

One organization that is helping in expanding this community is Nontraditional Employment for Women (NEW), which prepares, trains, and places women in careers in the skilled construction, utility, and maintenance trades, helping women achieve economic independence and a secure future for themselves and their families. Culhane said that, through a coordinated effort between NEW, contractors, labor unions and the government, the number of women construction workers in New York City has grown substantially. “Reach out to your community and think about how to make a difference because the ripple effect is huge,” she said. Culhane leads the organization to meet ambitious programmatic and fundraising goals and has been instrumental in the creation of many innovative programs, securing NEW as a national model for advancing women in the building and construction trades.