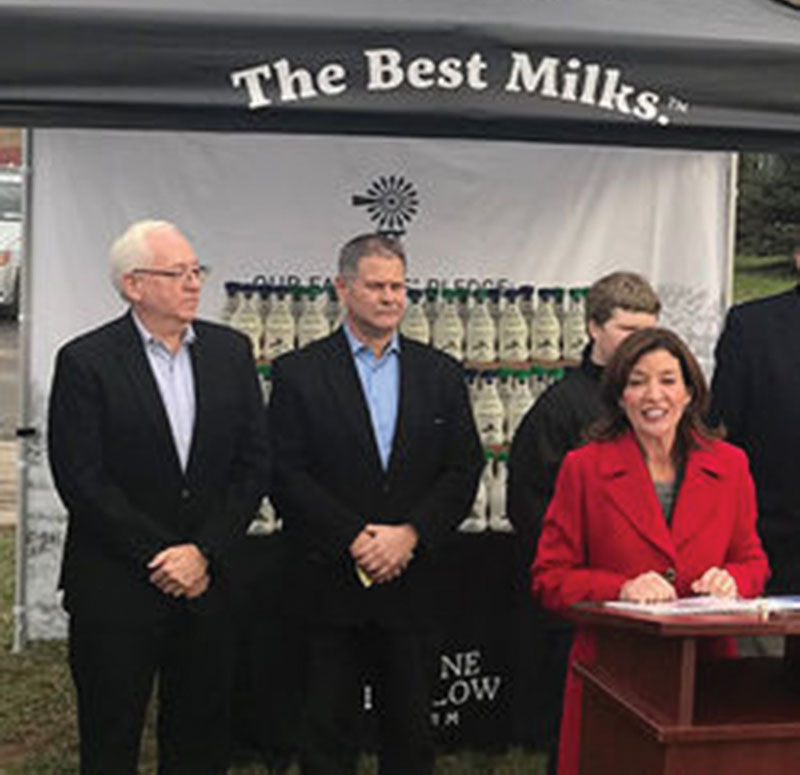 Dewitt, NY Governor Andrew Cuomo celebrated the groundbreaking of Byrne Dairy’s Ultra Dairy plant $24 million expansion—the first phase of the company’s $125 million plan to expand and create nearly 250 jobs in Onondaga County. The initial phase will create 30 new jobs and includes a 42,000 s/f expansion that will allow the plant to increase its packaging capability as well as add additional processing capacity and storage space. Over the course of three phases supported by a $15 million state investment, the company is planning several additional projects at its other production and warehouse facilities.

“Dairy is a major part of our agricultural industry, and the expansion of operations at Byrne Dairy will help to further grow this critical sector of our economy,” governor Cuomo said. “Byrne Dairy is a fourth generation, family owned New York business, and its expansion will create jobs, spur economic development, and help Central New York continue to rise.”

In addition to the 30 new jobs, the Ultra Dairy expansion will result in the retention of almost 200 jobs at the facility. The company’s Ultra Dairy plant, located at 6750 W. Benedict Rd., first opened in 2004. The facility uses an ultra-high-temperature pasteurization process to extend shelf life of up to 150 days. Ultra Dairy processes conventional and organic milks, creams, and other dairy products as well as non-dairy products. The expansion will allow Byrne Dairy to increase output by adding processing capacity and increasing efficiencies in downstream equipment.

In addition to the Ultra Dairy expansion, Byrne Dairy has proposed several additional projects at its other production and warehouse facilities. The projects are being supported by $7.5 million CNY Rising Upstate Revitalization Initiative Grant, and another $7.5 million through the Excelsior Tax Credit Program in exchange for the job creation commitments. Additional projects include a further expansion of the Ultra Dairy facility, expansion of the company’s yogurt and cultured product facility in Cortlandville, and an expansion of its warehouse capabilities in Syracuse and Dewitt which will result in the creation of 248 new jobs.

Carl Byrne, president and CEO of Byrne Dairy, said, “We’re excited to begin this next chapter of Ultra Dairy’s growth. Our ability to expand to meet the growing demands of our customers is critical to the success of not only Byrne Dairy, but also family farms throughout Central New York.  Under Governor Cuomo’s leadership, Empire State Development has been a strategic partner in ensuring Byrne Dairy’s continued growth,” Byrne said.

Originally founded in 1933, Byrne Dairy currently operates four production facilities in central New York. In addition to the extended shelf life facility, the company operates a fresh milk plant, an ice cream plant in downtown Syracuse, and a yogurt/cultured products facility in Cortlandville. The storied company also has wholesale distribution centers throughout New York State and in Massachusetts. The company also operates a chain of over 60 convenience stores throughout Upstate New York.

Onondaga County executive Ryan McMahon, II said, “This expansion and continued success of Byrne Dairy is great news for Onondaga County. My administration has placed a laser like focus on re-engaging with our local businesses and reimagining our approach to economic development. I would like to thank governor Cuomo for his partnership, supporting our area farmers and his commitment to agribusiness in upstate New York.”

Town supervisor Ed Michalenko said, “Byrne Ultra Dairy is a powerful example of the synergistic partnership between government, residents, and business that’s tangibly ‘building community’ here in the town of DeWitt. Vital, profitable, expanding businesses like Byrne strongly support the strength of our tax base, the value of our homes, our overall quality of life, the efficacy of our town services, and the sustainability of the central New York region. We’re pleased and proud Byrne calls DeWitt home; they are a valued member of our community, in fact, we’ve featured them in our upcoming town newsletter.”

So sad the state is throwing good money at a dying business. As proof, already one of the individuals in the picture has left the company. He knew to leave town as quickly as possible. Poorly managed company.