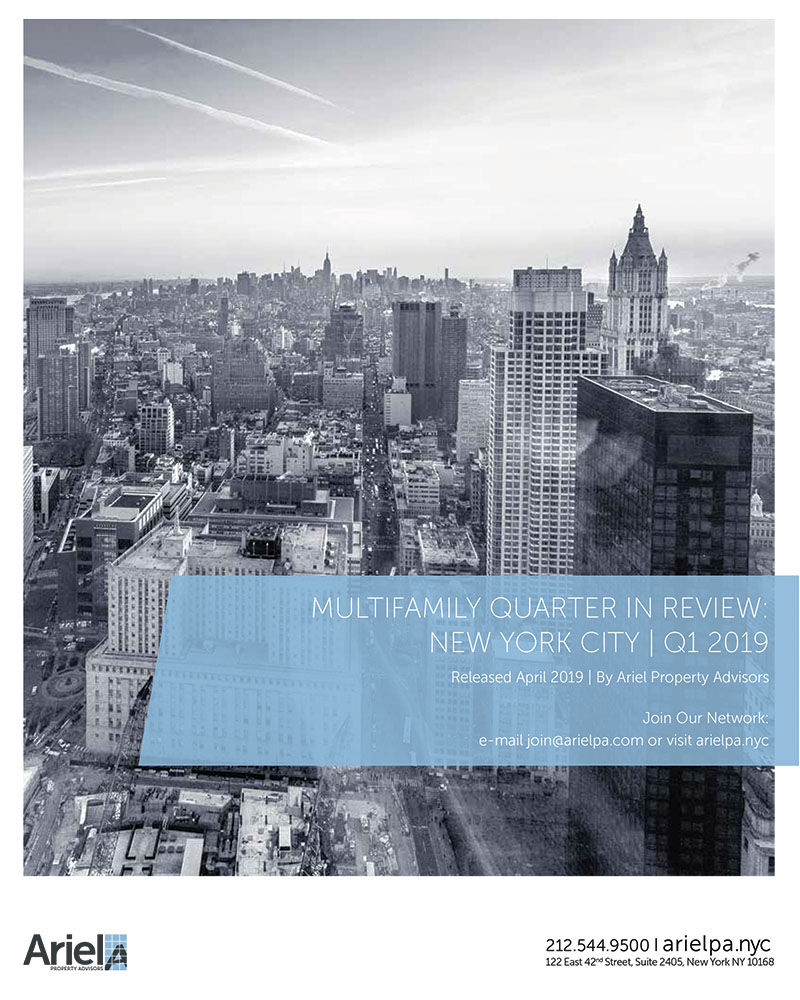 Q: How did the multifamily market perform in the first quarter?

A: Uncertainty surrounding the looming expiration of the state’s rent regulation laws made a profound impact on New York City’s multifamily market in the first quarter, with sales slumping to their lowest level in nearly nine years. All three volume metrics recorded sizeable declines on a quarterly and annual basis, while pricing was a mixed bag.

Q: What impacted activity in the first quarter and how did prices hold up?

A: Many investors opted to stay sidelined in the first quarter and will continue to do so in the second quarter since the laws governing the city’s rent-stabilized and rent-controlled housing stock are up for renewal on June 15. This uncertainty weighed heavily on the multifamily market. Proposals being talked about to be eliminated include:

As a result, the overall dollar volume of multifamily transactions declined 48% and the number of sales slid 31%. Of note, transaction volume in the first quarter was the lowest since the third quarter of 2010.

With indecision still hanging over the market, we anticipate this trend to continue in the second quarter of 2019.

Pricing, meanwhile, was a mixed bag. Based on a six-month trailing average ending in March, the average price per s/f in Brooklyn and Queens both rose 11%. The average price per s/f decreased 8% and 10% in Manhattan and Northern Manhattan, respectively, while they held steady in The Bronx. (For pricing metrics on all New York City sub-markets, see page six of APA’s report.) 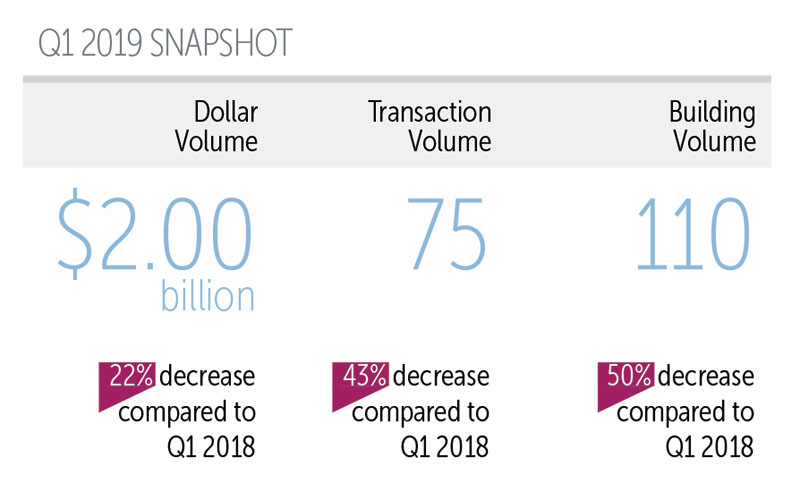 Q: How did the submarkets perform in the first quarter?

A: Manhattan, on a quarter-over-quarter basis, saw multifamily dollar volume drop by 51% to $801 million, and the number of transactions fell 40% to 21 transactions. The largest transaction was The Jack Parker Corp.’s $260 million sale of 450 Washington St. in Tribeca to The Related Cos.

Northern Manhattan’s five transactions in the first quarter sold for a total consideration of $94.5 million. Compared to the fourth quarter of 2018, transaction and dollar volume declined 76% and 86%, respectively. The sale of 452 Fort Washington Ave. for $18.25 million was the largest sale of the quarter, with Foxboro Partners, LLC as the buyer and J&M Realty Services Corp. as the seller.

The Bronx’s 17 transactions from January through March sold for a collective $140.5 million, representing quarter-over-quarter decreases of 11% and 46%, respectively. The $23.85 million sale of 201 East 164th St. by Sheridan Court Mews Associates to The Lightstone Group was the largest transaction in the borough.

Brooklyn recorded 18 sales in the first quarter, representing a slide of 18% versus the fourth quarter of 2018. Dollar volume jumped 44% to $688.7 million, which can partly be attributed to Morris Weintraub Associates’ $95.74 million sale of the South Brooklyn multifamily portfolio to Parkoff Management, the largest portfolio sale in the quarter. The 358-unit Bay Ridge asset consisted of five elevator properties.

Queens experienced 14 transactions totalling $279.76 million in the first quarter. Compared to the fourth quarter of 2018, transaction volume increased 17%, while dollar volume fell 66%. The largest sale of the quarter was Mega Contracting Inc.’s $75 million sale of 31-57 31st St. to Hubb NYC in Astoria.

Meanwhile, the East Village and the Upper East Side were the most active neighborhoods in Manhattan below 96th St., with nine sales each in the quarter. In Northern Manhattan above 96th St., Central Harlem’s six sales made it the most transactional region.

In The Bronx, Fordham was the most vibrant in the first quarter, with six sales. In Brooklyn, Bedford-Stuyvesant and Williamsburg were the most active, with three transactions each. In Queens, Astoria and Flushing were the most energetic, with six and four sales, respectively.

Q: What do you see on the horizon for multifamily properties and multifamily development?

A: The market is waiting for regulation clarity. Owners, operators and investors will take some time to digest the new regulations’ impact on certain assets and start making long- and short-term strategic decisions. We foresee underwriting standards, valuations of rent-stabilized turnover, and investors’ return expectations to become clearer before the end of the year. As a result, we expect the second half of 2019 to be more active in terms of transaction volume.

In terms of multifamily rental development, developers are enticed to build in the outer boroughs. Opportunity Zone incentives, re-zoning initiatives and Affordable New York have made it economically viable to build rentals, a trend we have not seen since 2011. Opportunity Zones allow the participation of less expensive capital, which can further entice landowners and areas of the city where Affordable New York’s (mostly Option C) affordable component is very close to market rent, with 130% of Area Median Income.

Lastly, due to the luxury condo market’s softening, we are seeing many landowners become more open to joint ventures and ground lease structures, which allow both the landowner and developer to enjoy the long-term benefit of owning rental apartment assets with a long-term tax abatement.

A: Ariel Property Advisors’ “Multifamily Quarter in Review New York City: Q1 2019” and all of our research reports are available on our website at http://arielpa.nyc/investor-relations/research-reports.