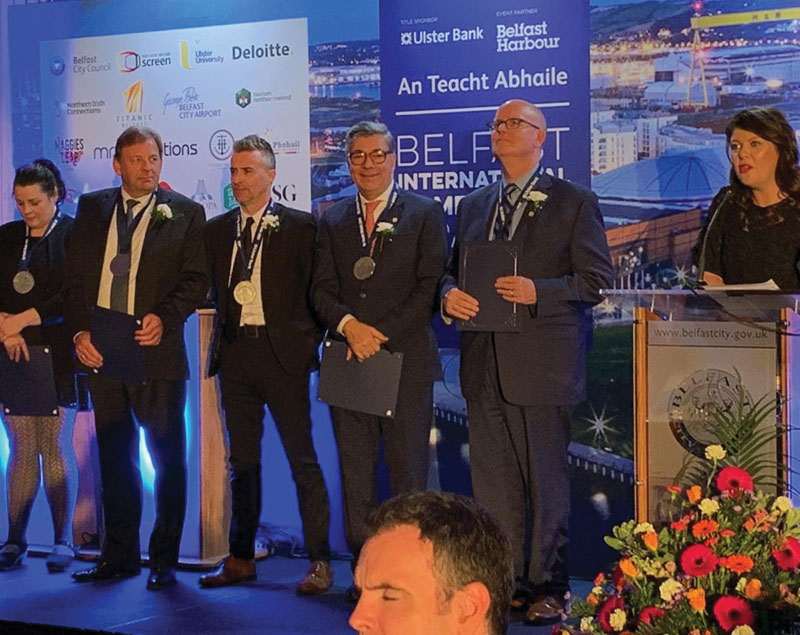 New York, NY According to JAACRES, The Belfast International Homecoming has awarded Joseph Aquino “The Ambassador of Belfast” medal. Aquino was honored for his role as an international business leader at a ceremony at Belfast City Hall.

Aquino has offices in New York, Belfast, and London, and is involved in the redevelopment of Belfast’s Downtown City Hall District, which offers a variety of development opportunities.

“Belfast has modeled itself after Boston, with its first-class universities such as Queen’s and Ulster,” Aquino said. “The metro area has a huge student population that’s underserved at the moment, with plenty of opportunities to address that market.

“We also see tremendous need in the office market. More than 600,000 tenants are waiting for future developments to occupy. PricewaterhouseCoopers just secured 234,000 s/f of class A office space, and are ready to take possession in the first quarter of 2020.”

Rents in Belfast are increasing slowly, Aquino said. Current commercial rents top out at £22 pounds per s/f, compared to Dublin’s top rate of £64 pounds per s/f.

“We see tremendous upside in all real estate sections in this market, including hospitality,” Aquino said. “I would compare Belfast to the Las Vegas of 25 years ago. There is nothing but opportunity, with a few super blocks near City Hall that could become available.”

Other important facts;  grade A office vacancy is 3% (about as close to close as is possible) · Pipeline of Grade A office product in Central Belfast District completing within next 12 months is 50,000 s/f and within the next 24 months I’d 250,000 s/f.

New hotels are Hampton by Hilton, AC by Marriot, The Maldron, The Grand Central, The Bullit, The Merchsnt and everyone’s old time favorite, The EUROPA.

Belfast is also one of the UK’s fastest growing creative clusters and is home to the global phenomenon that is HBO’s Game of Thrones and the new Warner Horizon series, Krypton.

The city has an excellent quality of living with affordable, high quality housing, easy access to natural assets and a renowned education system.

Belfast as a city recently received various accolades including: