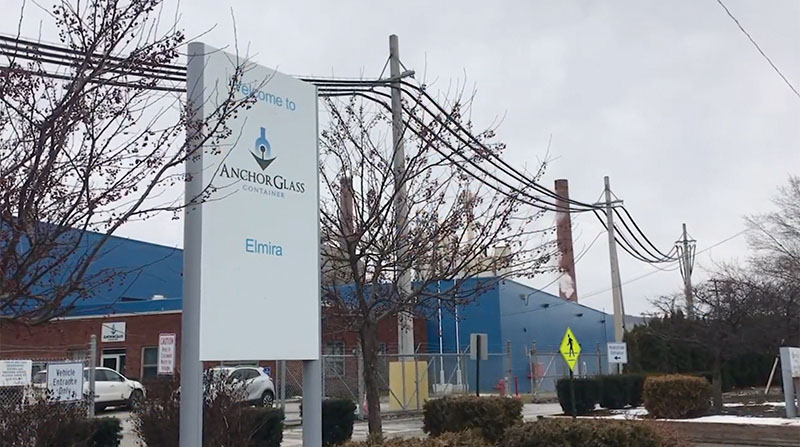 Elmira, NY According to governor Andrew Cuomo, Anchor Glass has completed a $51 million expansion of its facility in Chemung County. The expansion was made possible through the support of the governor’s ReCharge NY program, which provides qualifying businesses and nonprofits with lower energy costs in exchange for commitments to retain or create jobs in New York, and the Southern Tier Soaring Upstate Revitalization Initiative.

“Our approach to economic development is working for the Southern Tier…local companies like Anchor Glass are making major investments that ensure they can continue to compete and succeed in today’s global economy,” governor Cuomo said. “This expansion and partnership with the state is the latest example of our improved business climate and I look forward to seeing the company continue to grow and create jobs in Upstate New York.”

“New York has been a longtime partner to Anchor Glass, with low-cost power through NYPA’s ReCharge NY program and grant funding from Empire State Development,” said Lieutenant Governor Kathy Hochul. “The success of Anchor Glass is a shining example of the positive results public-private partnerships are having on the state’s economy and a demonstration of our commitment to supporting great businesses across New York State.”

Since 2012, Anchor Glass receives 3,315 kilowatts of NYPA hydropower through the governor’s ReCharge NY program. The power allocation was renewed for seven additional years in 2019, and is directly tied to the firm’s commitment to retain 240 existing jobs. Under the governor’s program, Anchor Glass has saved more than $4 million in electricity costs. Additionally, Empire State Development awarded $1.95 million in grant funding, through the Southern Tier Soaring Upstate Revitalization Initiative, in support of the expansion project to modernize the facility.

General manager at Anchor Glass Jason Achterberg said, “I’d like to extend my gratitude to governor Cuomo, NYPA and ESD for their support of Anchor Glass over the years. As a customer of ReCharge NY since the program’s inception, we’re aware of how impactful the low-cost power has been in continuing our operations in Elmira and providing us with the ability to reinvest in the facility.”

NYPA president and CEO Gil Quiniones said, “ReCharge NY has been a great benefit to the Southern Tier, creating nearly 750 jobs in the region since power was first provided under the governor’s program in 2012. This completed expansion by Anchor Glass is great news for the local community as it signals the company’s strong commitment to the area.”

Empire State Development acting commissioner and president & CEO-designate Eric Gertler said, “Anchor Glass’s latest expansion is having a major impact on the regional economy, through both job creation and the company’s collaborations with other businesses throughout the region and state. This project, supported through the Southern Tier Soaring Upstate Revitalization initiative, also underscores the critical consideration of electricity costs in business growth and the added-value economic benefits of the ReCharge program’s lower-cost power allocations.”

Under the governor’s ReCharge NY program, NYPA has awarded power allocations to nearly 713 New York businesses and not-for-profit organizations and has positively impacted the New York’s’ economy by retaining and creating jobs, and sparking capital investment in regions throughout the state. ReCharge NY offers power contracts for up to seven years. The program draws 455 megawatts from NYPA’s Niagara and St. Lawrence-Franklin D. Roosevelt hydroelectric power plants, which provide some of the greenest, cleanest and lowest-cost electricity in the State. The remaining 455 MW is power purchased by NYPA on the wholesale market.

RNY supports 35 businesses and not-for-profit organizations in the Southern Tier, directly supporting the creation or retention of nearly 24,700 jobs and more than $1.5 billion in capital investments.

There is currently 191 MW of low-cost RNY power still available to be allocated to businesses and not-for-profit organizations throughout the state.