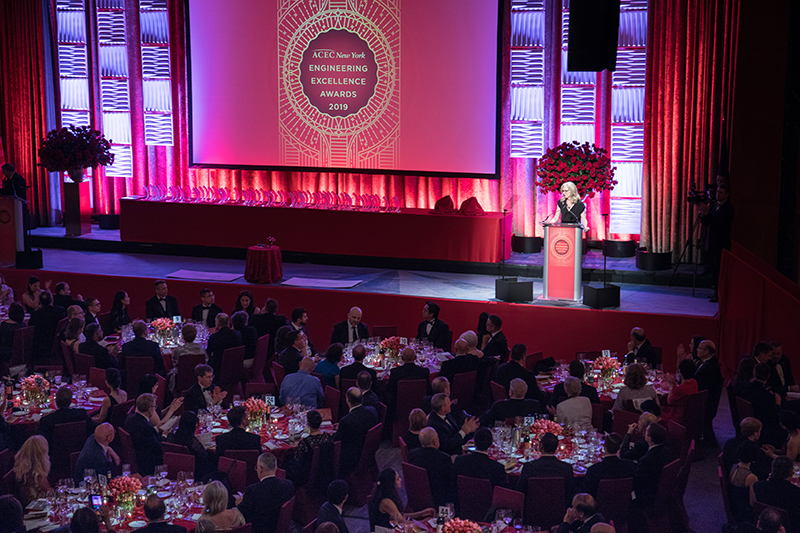 “Every year, we take one night out of our busy schedules to honor our members by recognizing their hard work on exceptional projects that push the limits of physics, while meeting the demands of modern life across our world,” said Rich McFadden, chair of ACEC New York. “Events and programs like Engineering Excellence send a message that the engineering profession has value, that the built environment is important, and that the needs of the public will always be the highest priority.”

That evening, ACEC New York honored two Awards of Merit honorees: The NYS Thruway Authority and the Metropolitan Transportation Authority for their commitment to improving the infrastructure of New York through their policies and programs. Proceeds from the event benefitted the ACEC New York Scholarship Fund, formally the New York Consulting Engineering Scholarship and Educational Fund. Two scholarships were given that evening in honor of the two 2019 Awards of Merit honorees.

The Empire Award, the top-rated project designed and built entirely within New York State, was announced that night and presented to Arup for the The Emma and Georgina Bloomberg Center. A key part of the first built phase of the new Cornell Tech campus on Roosevelt Island, The Bloomberg Center is home to student learning and student life, serving as campus intellectual hub. This building was designed to achieve as close to net-zero energy as possible, all within a relatively modest budget.

A complete listing of the award-winning projects is available on the Engineering Excellence page of ACEC New York’s website (acecny.org).

ACEC New York is a proactive coalition representing nearly 300 member firms who engage in every discipline of engineering related to the built environment including civil, structural, mechanical, electrical, environmental, and geotechnical. We are a diverse group of consulting engineering firms from across New York State, ranging from sole proprietors to multinational corporations that collectively employ over 30,000 New Yorkers and nearly ten times that number worldwide.