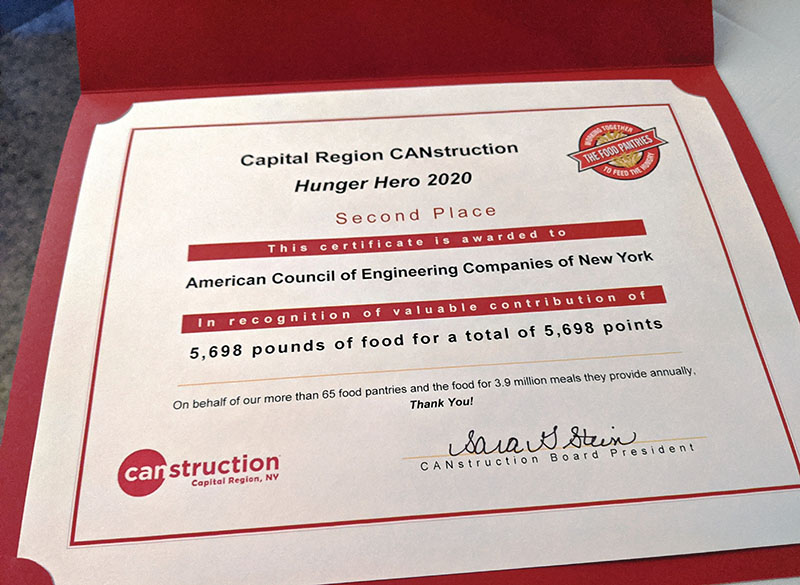 Albany, NY On March 4, 2020 the American Council of Engineering Companies of New York (ACEC New York) was recognized by Capital Region CANstruction and The Food Pantries for The Capital District as the second highest “Hunger Hero” donor for 2020 at their reception at the New York State Museum.

CANstruction is an annual exhibit and design competition that connects talented architects, engineers, contractors, and students to imagine and create colossal structures built completely out of canned food items. The structures are on display on the fourth floor of the New York State Museum for two weeks (March 4-18), raising awareness of food insecurity in the region while highlighting the local talent of design firms. Proceeds benefit The Food Pantries for The Capital District. This year’s theme is “Let’s Eat!”

ACEC New York donated 5,698 pounds of food through the can sculpture commissioned for the 2020 Winter Conference, which was on display at the Albany Capital Center from January 26-28. This sculpture and donation were made possible through the efforts of ACEC New York Public Relations Committee Chair and Capital Region CANstruction vice president Jill Shorter, Ryan Biggs | Clark Davis Engineering & Surveying.

“We’re thrilled with the donation provided by ACEC New York through Capital Region CANstruction’s Hunger Heroes program,” said Shorter. “Hunger Heroes invites community groups, professional organizations, and businesses to be part of the larger CANstruction program by giving them the opportunity to collect food and funds for the cause. Every can and every dollar raised is donated to The Food Pantries for the Capital District at the conclusion of CANstruction.  ACEC New York has had a significant impact on this program for the past several years and their enormous donation in 2020 will help to feed the nearly 90,000 people that are food insecure in the region.“

ACEC New York is proud to support the efforts of member firm build teams, as well as an excellent cause for the Capital Region.

ACEC New York is a proactive coalition representing nearly 300 member firms who engage in every discipline of engineering related to the built environment including civil, structural, mechanical, electrical, environmental, and geotechnical. Our shared goals are to further the business interests of our membership, enhance the quality and safety of the environment we live and work in, and help ensure the vitality of our communities.