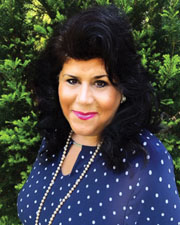 What was your favorite job and what did you learn from it?
I was the advertising director for an award winning magazine called, Grid Magazine an offshoot sister publication to internationally acclaimed, Interior Design Magazine. Grid was a commercial real estate & design magazine with a national and international readership. The most influential and elite commercial real estate developers, architects, designers in the world adored this oversized glossy magazine. If you had a Grid Magazine on your coffee table you were a big somebody. The magazine was not sold in stores. It was for the top tier jet setters by invitation only that developed a cult following. Although, we were based in New York, I travelled the U.S. and internationally being exposed to the most exceptional cutting edge buildings on the planet. Before that position, I had a strong foundation developing Real Estate New York Magazine and being the real estate advertising manager at the New York Post featuring luxury properties. The best memories I have of being in those glamorous environments is the special people I have met along the way. The incredible imaginations of these titans that build skyscrapers and commercial, retail and hotel developments around the globe. Your surroundings and environment play a role in our lives. Geniuses were featured in Grid Magazine. I learned to think outside of the box.