Executive of the Month: Glanzrock, founder of Glanzrock Realty Services - Sets out to continue family's legacy in real estate, the arts and philanthropy 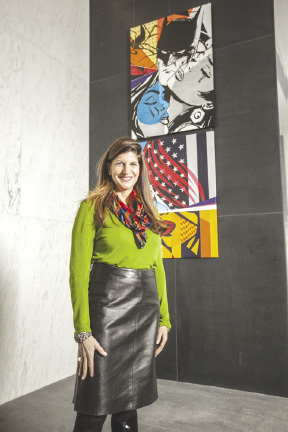 Growing up between several households on Sutton Place, 2 Fifth Ave., Greenwich, and Miami, Cindy Farkas Glanzrock adapted to an adventuresome life of her parents, one of maximum exposure to real estate, art and fashion. The adopted daughter of Alexander Farkas, who ran the Alexander's department store chain, and Francine Farkas Sears, the former store's fashion director, Glanzrock had traveled the world with her family by the age of 10.
Today, Glanzrock, whose biological father, Sanford "Sandy" Glanzrock, a legend in the menswear industry, is now shaping her own compelling story. She founded the commercial real estate firm Glanzrock Realty Services in 2004 and has set out to continue her family's legacy in real estate, the arts, and philanthropy.
As a teenager, it was Alexander Farkas who gave her her first retail job working summers at Alexander's. At the age of 15, she convinced her dad to name the store's popular pop-up knock-off Charles Jourdan shoe department the "Shoebox," where she helped sell the pumps by literally pulling women off the store's escalators and convincing many of them to buy four pairs of shoes at a time. As a teen, she also traveled to Madrid to work with the shoe's manufacturer. And it was Glanzrock's idea to put "saleswomen" behind the men's tie bar that sold silks imported from Cuomo, Italy.
Glanzrock uses her creativity and "saleswomanship" to represent artists, restaurants, restaurants, hospitality and back office leasing and sales. Her clients have included galleries and restaurants, world renowned chefs, retailers, corporate professionals, landlords and property owners like the ABS Partners Real Estate, Daniel Boulud's Dynex Restaurant Group, and Maison Kayser Parisian-style restaurants who hired her firm's advisory service to help train and manage their staff.
But despite the thrill of the high rent commercial brokerage deals, it is now Glanzrock's desire to represent artists and galleries specifically. Her main focus is to uncover and discover artistic talents and galleries and put artists together with the right collectors. Glanzrock is taken with the "struggling and undiscovered artist syndrome" to find collectors, audiences and the right venue where they have space to create, show their work and make a nice living.
In January, Glanzrock launched the Building Art Curatorial Program (BACP), a comprehensive program designed to connect artists and spaces, tailored to specific buildings within a select real estate portfolio. BACP discovers, exposes, and leases art to commercial clients for their lobby spaces with the option to purchase the artwork.
915 Broadway, managed by ABS Partners Real Estate, was the first building to partner with BACP to unveil its newly renovated lobby. It debuted its lobby redesign and showcases street-chic artwork from Sen2, a Bronx-based artist who has leased two pieces from his cartoon series to be displayed in the building's lobby. The building will exhibit the artwork for a limited period, similar to a gallery or museum rotation.
Subsequently, Glanzrock introduced installations at 1001 Sixth Ave. (at the corner of 37th St.), which features pop sculptures from artist DOC (Design Obtain Cherish), and 29 West 38th St., which showcases the work of graffiti artist LARoc/LAII, protÃ©gÃ© to Keith Haring.
Glanzrock's goal is to unify commercial building owners, corporate collectors, tenants, and the public with emerging artists. "Commercial buildings with a great deal of foot traffic provide artists with an opportunity for enhanced exposure they wouldn't ordinarily attain," said Glanzrock, who founded the program and serves as creative director. "BACP selects relevant artwork for commercial lobbies that is reflective of the respective building's history, tenants, and location, dramatically enriching the experience of both the tenant and visitor, as well as increasing the building's value. We anticipate that BACP will encourage more commercial buildings to become involved."
Glanzrock began her real estate career 20 years ago at Insignia/Edward S. Gordon, where she brought in and closed a half a million dollar leasing deal in her first six months. She went on to work at Murray Hill Properties and Trammell Crow and worked on deals with Swig Equities/Helmsley Spear and Massey Knakal where she found first rate tenants for first class commercial properties throughout the city.
She is also closed a deal in the Springs in East Hampton to help contemporary artist Greg Miller find an East End art house, which he is currently expanding from the existing1,600 s/f space into a 6,500 s/f working artist's studio.
Glanzrock worked as a food professional and chef at the James Beard House "Days of Taste" program and produces first-time community events for The Watermill Center, and most recently coordinated partnerships for Today is the Day foundation.
Before going into real estate, Glanzrock worked for Alexander's department stores, as an associate buyer at Ann Taylor, a producer in Los Angeles at MTV and Fox, a director of sales at The Tobe Report, and a publicist at Loving and Weintraub and Cuoma/Agisim.
Tags:
Previous StoryNext Story
Print
PDF