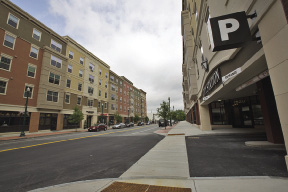 The neighborhood at City Station expands further with the recent completion of its East building. At full capacity, College Suites at City Station now has 151 apartment suites to accommodate up to 396 Rensselaer graduate students. With a total of three residential buildings (East, West, and South) now available within walking distance to the Rensselaer Polytechnic Institute campus, City Station supports Rensselaer's housing need as their graduate program continues to grow.
Between 24-hour group study areas to undertake team projects, a state-of-the-art fitness center, gaming areas, and a short walk to either class or downtown Troy, the neighborhood at City Station provides the convenience and quality of life that graduate students need to focus on balancing their academic and social life.
"We are committed to providing Rensselaer with innovative housing solutions that offer a secure, quality living environment for their students," said Michael Uccellini, President and CEO of United Group of Companies, who owns and manages City Station. "Our College Suites at City Station incorporates state-of-the-art technology and amenities, allowing students to live, learn, and relax. The City Station community creates a competitive advantage for the graduate program at Rensselaer, helping to recruit the best and brightest."
College Suites at City Station East opened its doors to Rensselaer graduate residents on August 1st. Across the street from the Phase 1 West building, the Phase 3 East building is along the east side of Sixth Avenue between Congress and Ferry streets. The East building has 157 student housing beds that, like West, are designated to Rensselaer graduate students. College Suites at City Station South, on the south side of Ferry Street, will remain Rensselaer graduate family housing.
"The Rensselaer graduate community at City Station is the keystone of our efforts to create an educationally supportive living environment for all graduate students," said Stanley Dunn, Vice Provost and Dean of Graduate Education at Rensselaer. With over 100 graduate programs in more than 50 disciplines, Rensselaer attracts top students, researchers, and faculty to the City of Troy. We are grateful for our strong partnership with the United Group and for the shared commitment to our graduate students."
In addition to graduate housing, like West, the new East building's ground floor consists of multiple retail spaces. Prospects are very excited about the available retail space in the City Station neighborhood; there have been multiple prospects within the past month. Plum Dandy and Birkmayer Travel are already scheduled to move into two of the spaces this fall. Interested parties in commercial space should contact Tom Uccellini Jr. at [email protected]
An enclosed underground parking garage with 88 spaces is dedicated to retail customers and opened on August 1st. There are an additional 98 resident parking spaces now available in a parking lot at the rear of the East building.
$60 million, inclusive of infrastructure, has been invested thus far into the ~247,000 square feet of the City Station neighborhood. The United Group has received tremendous support from Mayor Lou Rosimilia and the City of Troy, as well as the State of New York through Governor Cuomo's Regional Economic Development Councils, as part of their continued efforts to grow the local business community and expand parking facilities.
"It's more vibrant. It's enticing lots of students to come downtown," said Troy City Council President Lynn Kopka.
"The City Station project was named a priority project for the Capital Region Economic Development Council in both Rounds 2 and 3, as it aligns with the council's goals to focus on developing the region's downtown economies," said Empire State Development President, CEO & Commissioner Kenneth Adams. "The project is already having a meaningful impact on the revitalization of downtown Troy and we are pleased that through the Regional Council process, we are successfully leveraging critical tax payer dollars to spur private business investment and create jobs."
Uccellini and Mayor Rosimilia did a walk-though of the new property shortly after the East building opened to students.
"It lends to the academic pursuit of the students," said Rosimilia. "Between the private bedrooms, common areas, study areas, parking facilities, and workout rooms, [College Suites at City Station] creates a healthy living environment from both a physical and mental perspective. I think they encompassed everything...it's a state- of-the-art facility."