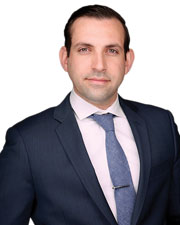 Which project, deal, or transaction was the “game-changer” in the advancement of your career?
The Central Artery/Tunnel Project, also known as “The Big Dig,” in Boston. While an undergraduate in engineering, I was an intern for a firm that had worked on a portion of the design. While discussing claims that arose alleging issues with the design, I realized that much of the meeting was spent with the engineers reading plans for the attorneys and the attorneys explaining the legal process to the engineers. At that moment, the idea to combine both professions was planted in my head. Thankfully, I found Zetlin & DeChiara, a firm that specializes in that combination.

What do you like most about your job?
The “gray area.” Many professions are either focused on structure or focused on creativity. For me, the legal profession, especially litigation, is the perfect complement of both. While the law and the legal system create a structured framework, each client, project, or case bring unique facts, which offer the opportunity to be creative. That creative area, melding individual facts to the relative law is what I call the “gray area,” and why I believe is the most fun and exciting part of my job.

If your life were made into a movie, what actor would you want to portray you?
I would like to be portrayed by Joseph Gordon-Levitt because we appear to have similar characteristics. He seems to be a hard-worker, passionate about his career, well-grounded with a good sense of humor. He has the ability to play the lead role or a vital supporting character. But most importantly, I haven’t heard or read anything overtly negative about him or his personal character. I would like to think that portraying me would come quite naturally to him!