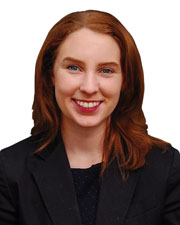 Education: Masters and Bachelors in Civil Engineering from University of Washington

How do you contribute to your community or your profession?
At LERA, I was a captain for our Canstruction team, we built my design of a pair of ballet shoes (inspired by my own experience as a dancer) out of 2,500 cans, and our structure won Best Original Design. Canstruction is an annual competition where architecture, construction and engineering companies build giant structures out of canned food. The structures are on display for two weeks at Brookfield Place, encouraging the public to donate canned food as well, afterwards the cans are donated to City Harvest.  Our can design also won third place in the International Competition from thousands of entries. Back in Seattle, I was the outreach chair for Structural Engineer Association of Washington’s Young Members Group and volunteered with Washington Alliance for Better Schools teaching engineering topics at an afterschool science club for girls. I think it’s really important to make the engineering community a better place for women to participate and lead. Starting by getting more girls excited about math, science and engineering is a great way to move in that direction. The reason I am where I am now is because of the amazing and formidable female engineers who have encouraged me. And I want to be that kind of role model for another girl.

What led you to your current profession?
My calculus teacher in high school was a civil engineer. She used examples from engineering to show how the complicated math we were using could be applied in the real world. She would talk with incredible enthusiasm about the most mundane things like the forces dirt exerts on a pile foundation, and I wanted to have that perspective. I wanted to be able to look at the seemingly boring things that make up our built environment with the same level of fascination and understanding that she had.

Which project, deal, or transaction was the “game-changer” in the advancement of your career?
A year and a half ago, I moved across the country and began working at LERA in New York City. I had lived in Western Washington my entire life. I graduated from school there and worked for two years and a small structural engineering company in Seattle. I decided I wanted to do something different, found a job at LERA, and moved across the country. Working in New York and at LERA has provided me with experiences that I never could have imagined like working on a major cultural project in Los Angeles. It widened my perspective on the world and of what structural engineering is capable.

What do you like most about your job?
I love being able to see projects I worked on in person. It’s amazing to see people going about their day, interacting with my designs.

What can our political leaders do to increase equality in the workplace?
In our industry specifically, I think it’s important to have more transparency. I think that salary information should be more public so that people at a disadvantage in a workplace have more leverage and a better understanding of what they deserve.

Who or what inspires you?
Marjorie Lund. Marjorie was a principal and owner of the company I worked at in Seattle. She started her own company, established the Sustainability Committee for the Structural Engineers Association of Washington, and is on the Washington State Board of Registration for Professional Engineers. Her path while staying involved in the engineering community, encouraging her employees, and raising a daughter has served as an inspiration to me and the path I hope to take.

If your life were made into a movie, what actor would you want to portray you?
My sister told me to say Saoirse Ronan. She has a great Irish accent, so I feel like that would add a nice voice to my life story!