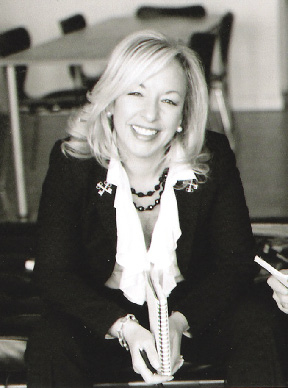 In New York circles, she is perhaps best known as the woman with the "golden rolodex" - the white-glove concierge to the city's highest earners, the person to call when you need sold out tickets to the Met or a reservation at Per Se.
Abbie Newman, a former chief concierge at the Intercontinental Hotel, who helped drum up the lagging New York hotel and tourism economy in the wake of 9/11's tragedy, is now taking her "hotel" skills and applying them to NYC's still hot residential condo market, where more and more New Yorkers want to live in buildings that resemble a hotel.
Newman's company, Abigail Michaels Concierge, provides five-star hotel caliber concierge service to high end residential developments and corporations that range from the basic hard to-get-dinner reservations or best personal trainer, to the highly imaginative and unique lifestyle management services. "Personalized lifestyle management services are the expectation of the new buyer, especially in NYC which is leading the trend," said Newman, who founded her company in 2002, along with her partner Michael Fazio.
Today the company's growing client list reads like a "Who's Who" of major NYC developers including: Swig Equities, Related Properties, Coalco, Douglaston Development, Extel Corporation and Clarett Group.
Over 4,000 units in over 40 of the city's most prestigious luxury residential condominiums are serviced by Abigail Michaels: The Element, Sheffield57, The Anthem, The Caledonia, One Carnegie Hill, Avery, 15 Madison Park North, 25 Broad, Sky House, Chelsea House, 111 Central Park North, 200 West End Avenue, the Foundry and others.
"We do pretty much anything as long as it's legal,'' adds Newman, whose company has become hugely successful with sales of over $3 million, and has plans to expand into new markets like Philadelphia, Miami, Chicago, L.A., Atlanta and other cities.
At AMC's "command center" at 31 East 32nd St., a staff of over a dozen highly trained concierges answer an average of 200 calls a day - six days a week, from 8 a.m. to 8 p.m. "We have to have all the answers or we are valueless," adds Newman, who along with Fazio, has 25 years of experience and a colossal rolodex of resources at their command.
While Newman's company provides full "virtual" concierge services for most developments, it also sets up hotel-style "on-site" lobby concierge desk service, when requested by developers like Kent Swig of Swig Equities or Ed Baquero of Coalco. Very often, says Newman, "on-site" concierges are brought in during the first six months after a new development officially opens to provide "total move-in management services" for new residents - everything from arranging movers, apartment cleaners and utility installations - to helping developers' staff with a punch list and apartment walk-thru to make sure all apartments are in move-in condition.
With the "condo concierge niche" pretty much taken over by Abigail Michaels, which is the largest company of its kind, Newman is on the lookout for the next best concept. She plans to expand to the corporate sector, already serving corporate clients such as Bessemer Trust and Rockdale Capital who offer concierge services to their employees and clients.
Looking to 2008, the company is hoping to expand its "high-tech" concierge technology (that not only matches a client with services, but can predict what services they need) and further develop strategic alliances with vendors that will benefit clients.
Unlike other concierge companies, Abigail Michaels is the only one that employs concierges who have all worked in the hotel industry for at least five years. "We give a condo project an extra verve with a quality and maturity of service that others can't," said Newman who teamed up with Fazio at the Hotel Intercontinental where they both worked as concierges, before the pair decided to strike out on their own in 2002.
"We invented a niche for what we did already," added Newman, who explained that she and Fazio decided to leave the hotel industry, after 9/11 when the city's tourism and hotel industry took a downturn, leaving many hotel rooms empty. At that time, with their charm and golden rolodex, Newman and Fazio persuaded celebrities, including Whoopi Goldberg and Martin Sheen, to lend their voices for recordings welcoming visitors to New York.
Before landing her job as chief concierge at The Intercontinental, Newman worked at the Lowell Hotel in Boston. She also worked as a concierge for a year with Ciga Hotels, specifically, The Excelsior in Florence, The Excelsior in Rome, and The Principe di Savoia in Milan.
Today Newman is a two-time recipient of the prestigious Concierge of the Year Award from American Express and Where Magazine. The Philadelphia native also served as secretary and vice president of the New York City Association of Hotel Concierge and is an active member in the prestigious international concierge association, Les Clef d'Or. A former restaurant and nightclub owner, Newman also serves on the advisory board for IN New York Magazine.