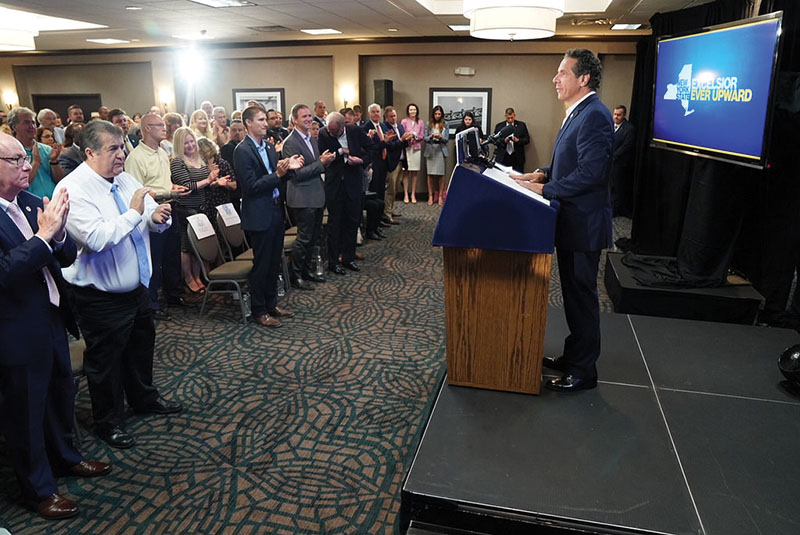 Kingston, NY According to governor Andrew Cuomo, six transformational projects in the city are part of the $10 million Downtown Revitalization Initiative award. The strategic investments in the city’s Stockade District will provide public open space and amenities for the community, improve walkability and transportation access and support small businesses. The investments are part of the governor’s ongoing efforts to revitalize the upstate economy and create more opportunities for the Mid-Hudson Valley.

“Kingston was our state’s first capital and has the opportunity to be a future hub of economic energy and excitement for the region,” governor Cuomo said. “These projects will transform the Stockade District into a vibrant neighborhood, boost the local economy and drive growth throughout the Hudson Valley.”

Kingston was named a DRI Round 2 winner in September. The Stockade District has historically been the city’s center, containing county office buildings, financial and professional services offices, the city’s sole supermarket, and key recreational spaces. Within the past ten years, the downtown area has experienced a renaissance led by an influx of new investments and a resurgence of new cafes, restaurants, and boutique shops. This area has an ideal combination of recent strategic investments, shovel-ready future opportunities, involved anchor institutions and partners, recent infrastructure improvements, and supportive policies and plans that jump-started the DRI planning process.

These projects will transform the Stockade District into a vibrant neighborhood, boost the local economy and drive growth throughout the Hudson Valley.

The specific projects to be funded through the DRI include:

Upgrade Dietz Stadium and Andretta Pool: A 2,000-seat facility that serves as a major venue for organized sports both locally and regionally. Improvements will be made to bleachers, water fountains, fencing and gates, lighting, bike racks, lockers rooms and bathrooms, food vending, signage, and parking. Additional upgrades will be made to the Andretta Pool and picnic facility, located across from Dietz Stadium. ($2.5 million)

Frog Alley Park Historic Green Space: Stabilize the remnants of the historic Louw-Bogardus House and create a public open space along Frog Alley next to the ruins which will serve as a gateway to the Stockade Business District. The Friends of Historic Kingston will open the site to the public after stabilizing the ruin and adding interpretive signage, paving, lighting and park amenities. ($472,500)

Stockade Business District Access and Circulation Improvements: Improvement of pedestrian access, traffic circulation, and wayfinding signage within the Stockade Business District, including improvements to the intersection of Albany and Clinton Aves. Key upgrades identified in previous transportation plans will improve safety and navigability while attracting tourism, shopping, dining and business activity to the area. ($1.34 million)

Kingstonian Development Public Plaza and Pedestrian Bridge: Provide for public amenities within the new $48 million Kingstonian mixed-use development that will transform a largely underutilized site at a prominent intersection by adding 132 residential units; 8,500 s/f of commercial space expected to include a mix of restaurants and retail shops; a 34-room hotel; and a 420-space parking garage with 250 spaces dedicated for public use. DRI funds will provide public amenities within the development to enhance its value to the community, including a pedestrian plaza with a walking bridge extending to Kingston Plaza. ($3.8 million)

Stockade Business District Small Grants and Loans Program: Support downtown small businesses and property owners by offering financial assistance in the form of small grants and loans for targeted improvements throughout the downtown, including façade improvements for buildings in the Stockade Business District; support for new and expanding businesses; and rehabilitation of downtown residential properties. ($600,000)

Kingston developed a Strategic Investment Plan to revitalize its downtown with $300,000 in planning funds from the $10 million DRI grant. A Local Planning Committee made up of municipal representatives, community leaders, and other stakeholders led the effort, supported by a team of private sector experts and state planners. The Strategic Investment Plan for downtown examined local assets and opportunities and identified economic development, transportation, housing, and community projects that align with the community’s vision for downtown revitalization and that are poised for implementation.

Kingston mayor Steve Noble said, “Across New York, the governor’s Downtown Revitalization Initiative has been a critical asset to local communities as we work to revamp and revitalize our neighborhoods. For Kingston, the DRI is a chance to build on the progress we’ve made and unlock the full potential of our community, and with New York State as our teammate, we are accelerating the renaissance of the city. Thank you, governor Cuomo, for all the progress we have achieved, and I can’t wait to see what more we can accomplish together.”

NYS Homes and Community Renewal commissioner RuthAnne Visnauskas said, “Through governor Cuomo’s Downtown Revitalization Initiative, these community-led, targeted investments will combine with HCR’s $591 million investment in the Mid-Hudson Valley over the last seven years that has created affordable housing for about 20,000 residents to help ensure that as Kingston’s economy grows, all New Yorkers have the opportunity to take part. In New York State, we are lucky to have a governor who understands how to build inclusive, long-term economic success.”