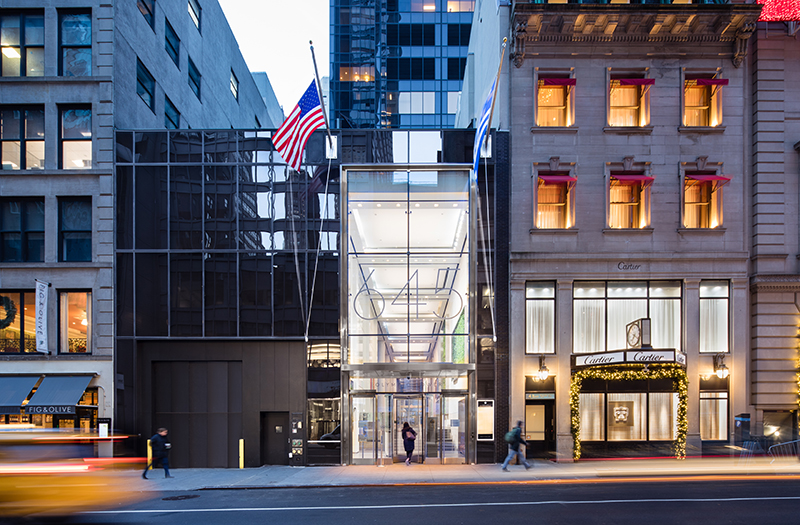 Manhattan, NY Oxford Properties Group, the global real estate arm of OMERS, has reopened the interior public plaza at Olympic Tower — a new, architecturally distinct retreat in East Midtown. Located at 645 Fifth Ave., Olympic Tower is a office and retail destination. In addition to the renovated public space, the $30 million redevelopment of Olympic Tower brings a modern private lobby and new amenities for the building’s customers. The fully-occupied tower is home to the headquarters offices of the National Basketball Association as well as MSD Capital and Richemont North America.

“Olympic Tower is one of Fifth Ave.’s most iconic buildings. Oxford immediately recognized its hidden potential, and has been dedicated to improving the customer experience, culture, and community since acquiring the building in 2015. This latest investment enabled us to fulfill our vision of Olympic Tower as a premier Midtown office destination. Moreover, it helps us deliver on our company’s overall goal to create exceptional experiences for each of the two million people that work, live or shop in one of our buildings each and every day,” said Kevin Egan, head of New York at Oxford Properties.

The commissioned artwork by Liam Gillick, titled Triangulated Passage, is a series of multi-dimensional sculptural pieces. The site-specific installation consists of aluminum panels presented in dynamic compositions that guide visitors through the interior lobby. Each of the three unique wall-structures contains a distinct and colorful schematic, while offering space for communal engagement and reflection.

In addition to the artwork, the new interiors feature a collection of elements – seating, landscape and retail – further allowing Oxford to create a premier experience for customers and visitors alike.

Circadian-relevant lighting system – The system displays oscillations of light over a 24-hour cycle, transforming the environment with warm amber light at sunrise before transitioning to cool, bright light during the day.