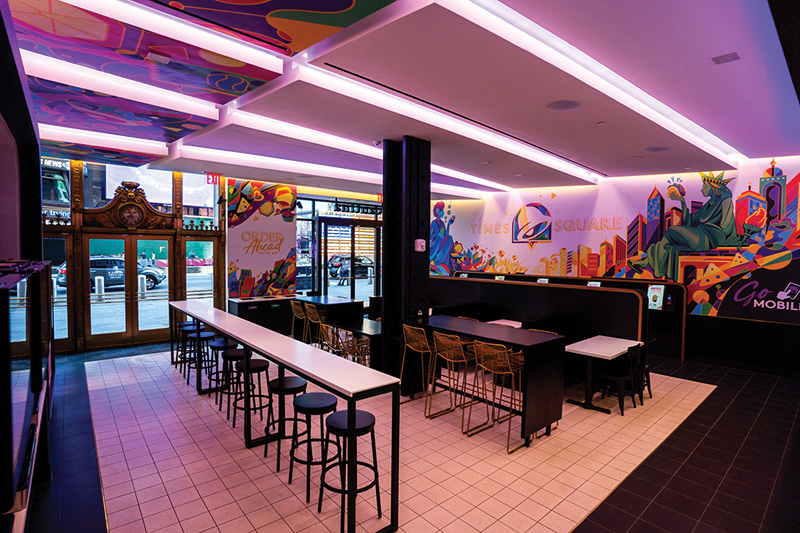 “Taco Bell appreciated the timeless elegance of The Paramount Building, and by incorporating the original golden entrance into its state-of-the-art flagship has created a truly special Times Square landmark that will be enjoyed by millions for many years to come,” said Charles L. Rosenberg, managing partner of Rosemark Management. “It has been a pleasure to work with Taco Bell over the past year, and we look forward to continuing our partnership into the future.”

“Times Square is one of the most recognized destinations in the world, and The Paramount Building punctuates this Midtown Manhattan neighborhood,” said LMC’s Matthew Harding, CEO. “Taco Bell Cantina is an outstanding addition, and its opening is such a positive signal for the marketplace. As the economy and consumer confidence continue to strengthen, the City is truly poised to move forward.”

The addition of Taco Bell Cantina follows a major reinvestment in The Paramount Building’s office component. At the center of the $50 million program, an award-winning lobby redesign and relocation moved the building’s main entrance from Broadway to 43rd St.

“Fast food chains continue to perform well,” Moawad said. “Texas Chicken & Burgers is a great fit for this neighborhood and will be a terrific amenity for the area’s residential and business populations.”

Moawad noted that 667-669 Stanley Ave. is supported by excellent demographics. The population within one mile is nearly 98,000, and the property, which includes a City Fresh Market, is well located at the signalized intersection of Stanley and Van Siclen Aves.

Texas Chicken & Burgers is a fast-food chain known for its crispy Southern-style fried chicken and variety of “never frozen” burgers. Menu items include biscuits, French fries, salads, and a selection of sides such as corn on the cob, cole slaw, macaroni and cheese, and mashed potatoes. From its original store in Queens, N.Y., the chain has expanded to include almost 40 locations in New York, Philadelphia and Washington, D.C.