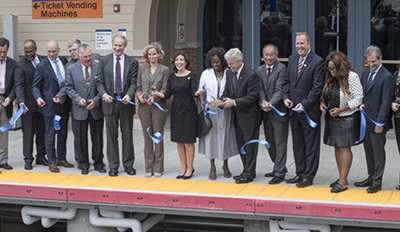 Wyandanch, NY According to governor Andrew Cuomo, the LIRR Double Track was completed a year ahead of schedule. This project adds a second 13-mile track between Farmingdale and Ronkonkoma — a segment of the LIRR that carries 48,000 riders every weekday — and will reduce delays and allow for reverse-peak service expansions. The double track project also includes a new signal system, electrical substation modifications and new third rail electrical systems that will power the new track’s trains.

“After 70 years of stagnation we are investing $6.6 billion in 100 projects to completely transform the LIRR and improve service, and the completion of the new Double Track demonstrates our commitment to delivering results,” Cuomo said.

“The LIRR is the lifeblood of the region’s economy andprojects like the Double Track and Third Track will help support future growth and vastly improve riders’ experience on the busiest commuter rail in the country.”

“We’re making significant investments to transform the Long Island Rail Road, and the completion of the new double track will significantly reduce delays and ease traffic,” said Lieutenant Governor Kathy Hochul, who delivered today’s announcement. “This project adds a second track and expands service between Farmingdale and Ronkonkoma, making transportation faster, easier, and safer for New Yorkers. We’re cutting through red tape to deliver ahead of schedule because we prioritize our commuters.”

The Double Track allows the LIRR to immediately begin offering substantial reverse peak service on the Ronkonkoma Line in the mornings and evenings for the first time. The new infrastructure will enhance train reliability by allowing dispatchers flexibility to route trains around problems that may arise. The Double Track project added 13 miles of new track to an already existing 5-mile stretch of previously unused track - totaling 18 miles. The first trains are entering the new double track region more than a year ahead of the original construction schedule, which was accelerated in 2016 at Governor Cuomo’s direction.

Early completion of the project will free up LIRR resources for other projects in support of LIRR’s expansion and modernization like East Side Access, the Main Line Third Track, and the Mid-Suffolk Train Storage Yard. Commuters can look forward to improvements at 39 stations throughout Long Island which will include amenities such as free public Wi-Fi, USB charging ports, bicycle racks, and customer information totems.

“More tracks, whether it’s here along the Ronkonkoma Branch corridor but also along the Main Line in Nassau County, mean more capacity and flexibility for the LIRR,” LIRR President Phil Eng said. “That means fewer train delays from congestion or from an incident. And it’s all one integrated system, so fewer delays on the Ronkonkoma Branch translates to fewer delays on other branches result from held connections or congestion at terminals.”

“Work here proceeded quickly to minimize impact to the customers and the local community,” said MTA Chief Development Officer Janno Lieber. “In that respect, this project was a forerunner of the approach we will be taking along the Third Track corridor, minimizing disruption and maintaining continuous inclusion of the local communities.”

Assembly Member Kimberly Jean-Pierre said, “The Long Island Rail Road is a critical piece of the island’s infrastructure, serving millions of Long Islanders and visitors each year. After years of delayed and frustrating service, today’s announcement marks a new day for Long Islanders. Completion of the double track—an entire year ahead of schedule—will truly transform the LIRR and the daily commute for thousands of riders. I thank Governor Cuomo for championing this significant undertaking, and for helping to improve the quality of life and local economies for Long Island residents.”

Suffolk County Executive Steve Bellone said, «I have been proud to work alongside Governor Cuomo to tackle some of the toughest challenges on Long Island, most especially upgrading our transportation system in Suffolk County. Nothing exemplifies his commitment to Long Island more than his dedication to rebuilding the Long Island Rail Road, which is the lifeblood of our communities and economic competitiveness. Today, the Governor is advancing historic investments to improve and expand service across the island, and I thank him for following through on his promise to get the job done.»

Nassau County Executive Laura Curran said, «The Governor continues to assist in fixing and improving our infrastructure and providing what we need to grow this economy. The Double Track ushers in a new era for commuting on Long Island. We thank the Governor for once again making good on his promises.»

Babylon Town Supervisor Rich Schaffer said, «The Long Island Rail Road is a pillar of our community, driving business and economic opportunity all across the island. Thanks to the Governor›s leadership, the new double track will improve LIRR service, making it easier for Long Islanders to commute, travel, and do business. And with the addition of the Wyandanch station, the local community will be able to attract businesses and new jobs like never before. I applaud the Governor›s commitment to these projects and to strengthening the Long Island economy with critical infrastructure investments.»

The 6:07 a.m. train from Penn Station, which previously had terminated at Farmingdale, is now extended to Wyandanch, Deer Park, Brentwood, Central Islip, and Ronkonkoma, where it connects with a train making all North Fork stops and due into Greenport at 8:54 a.m.

This pairing of an extended train and the connecting train provides reverse peak service to all 11 stations from Wyandanch through Greenport. Between Wyandanch and Ronkonkoma, it closes a reverse-peak service gap of nearly two hours during the prime reverse peak commuting time.

In addition, the 7:37 a.m. train from Penn Station to Ronkonkoma has added stops at Bethpage and Wyandanch, providing additional morning reverse peak service at those stations.

Reverse-peak trains that had originated in Farmingdale at 6:25 p.m. and 7:00 p.m. are now extended to originate at Ronkonkoma at 5:57 p.m. and 6:36 p.m., respectively, initiating true reverse peak service for the first time from Ronkonkoma, Central Islip, Brentwood, Deer Park and Wyandanch. The second train is timed to receive passengers from a connecting train from Yaphank and Medford.

The extension of these two trains closes a service gap of nearly three hours during the prime reverse peak commuting time.

In addition, the 4:46 p.m. train from Ronkonkoma to Penn Station has added stops at Brentwood and Wyandanch, providing additional afternoon reverse peak service at those stations.

Construction of the second track began in February 2014, with an initial completion forecasted for December 2019. Phase 1, covering the segment from Ronkonkoma to Central Islip, was completed in August 2016, when Governor Cuomo expedited the completion of the overall project to reduce its timetable by more than a year.

Businesses along the corridor have been citing the need for increased reverse-peak service to tap into regional job market, and Double Track, in conjunction with East Side Access and the Main Line Third Track projects, will unlock the region’s true potential.

Double Track will allow the LIRR to provide better access to Brookhaven National Laboratory and Long Island MacArthur Airport, and a second track will give this branch the capacity possibilities Suffolk County needs to grow, allowing transit oriented development to function optimally and encourage smart growth near train stations, as is already happening at Wyandanch.

As part of the Double Track project, the LIRR built two new 12-car-long platforms at the Wyandanch Station that include a snow melt system, a pedestrian overpass with elevators, new stairs, new canopies and new platform shelters. A new station building replaces a previous station building, which was built in 1986, with new amenities such as digital signs, MTA Help Points, Wi-Fi and USB charging stations and bike racks.

In recent years, LIRR has partnered with the Town of Babylon and Suffolk County in the site location and design of the new Wyandanch Station Building, as the LIRR station forms the heart of the Wyandanch revitalization effort known as Wyandanch Rising. For the 4,200 daily customers at Wyandanch Station, improved platforms will allow for a more comfortable customer experience.

The Ronkonkoma Branch Double Track project is one component of Governor Cuomo’s larger effort to modernize the LIRR.

In July 2017, Gov. Cuomo unveiled a $5.6 billion transformation of the railroad that includes 100 projects to expand the system’s capacity, eliminate dangerous grade crossings, and rebuild and upgrade tracks, switches, yards, signaling and power substations -- all efforts that will help increase the railroad capacity by more than 80 percent. These 100 projects address areas and issues that had been left untouched for as long as 70 years before this initiative made them a priority.

Spanning the entire railroad system, these projects, some recently completed and many others already started, will benefit railroad passengers by improving the reliability, frequency, and comfort of their trips and by improving customer communications.