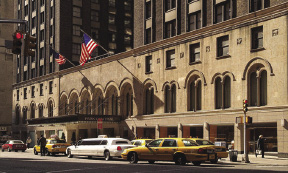 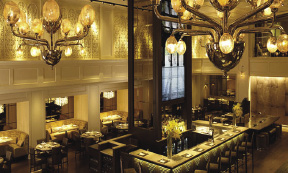 The historic 25-story Park Central Hotel New York, 870 Seventh Ave. between 55th and 56th Sts., has seen plenty of renovations in its 86 years but none as inventive as the latest by LaSalle Hotel Properties, a real estate investment trust that purchased the property in 2012. LaSalle's multimillion dollar vision successfully transformed the tired, 934-room hotel in midtown into two unique modern properties with separate entrances and lobby areas.
The stylishly renovated Park Central Hotel is a 761-room hotel and conference center with an authentic New York ambience and large hotel amenities, while the elite WestHouse Hotel, with its entrance at 201 W. 55th St., is an elegant boutique hotel with the sophisticated vibe of an urbane townhouse. The WestHouse was recently named one of six Small Luxury Hotels of the World.
Lilker Associates Consulting Engineers were part of the Park Central team from the onset, working with the owners, JBS Project Management, architect and designer Jeffrey Beers International, architect of record Kevin Brown with MLG Architects, and construction manager Turner Construction. Lilker provided mechanical, electrical, plumbing and fire protection design services for the renovation and upgrades of all guest rooms, relocation of the kitchen, and creation of two lobbies from Park Central's original space. The project was completed in less than two years while the Park Central Hotel remained in full operation.
"The architecture, construction and MEP team had to work quickly, under pressure, to create two distinct hotels from one space while at the same time keeping Park Central open for business. Not knowing exactly what lay behind the walls of the old, oft-renovated hotel created an enormous challenge, sorting through multiple layers to bring the structure up to twenty-first century standards," said Sam Provisero, a partner at JBS Project Management.
The new owners invested in an ASHRAE Level II Energy Audit, conducted by Lilker EMO Energy Solutions, to determine what capital intensive energy and water infrastructure upgrades were needed to ensure the new hotel systems function efficiently with as little waste as possible.
"Phasing was key, especially with guest rooms. Systems had to be kept running and any shutdowns had to be minimal," Vito Romano, PE, Lilker senior associate, said of overseeing a major renovation while the hotel was full of guests and tourists passing through.
Keeping energy concerns and modernization a priority was important despite having to work around the many historic, architectural and design elements. "Everyone had a vision for how they wanted the rooms to look and function. Our job was to meld those visions with the functioning aspects of a modern hotel room," said Romano.
The kitchen, which caters to both hotels and features renowned chef Nathaniel Eckhaus, was originally located by the old lobby toward the front of the building on the 7th Ave. side. The Lilker team moved the kitchen to the west side, where it shares a wall with Park Central's new, double height grand-scale lobby restaurant/bar. Because the building is U-shaped, a high-efficiency filtration system was essential to keep cooking odors from traveling throughout all 26 floors or settling in the bend and wafting upwards at will. Lilker also designed the kitchen units, which employ air side economizer to cool an area by bringing outside air into the building and distributing it without the use of compressors.
The latest renovation marks a new chapter for the storied Park Central. Since opening in 1927, the hotel has been host to luminaries from Frank Sinatra, Mae West and Jackie Gleason to Eleanor Roosevelt, who reportedly was responsible for covering up the mermaids in the famous Mermaid Room. Gamblers and mobsters frequented the hotel as well. Notorious gambler Arnold Rothstein, who was said to have plotted to fix the 1919 World Series, was found shot to death there in 1928. Mob boss Albert Anastasia was allegedly assassinated at the hotel in 1957 while getting a shave.
Founded in 1985, Lilker Associates is an award-winning, 100-member MEP engineering and energy firm headquartered in Manhattan with offices on Long Island and in Falls Church, VA. Licensed in many states, the company provides services for new and renovated commercial, institutional and retail facilities as well as high-rise and luxury residential buildings. The firm has two wholly owned subsidiaries: Technology Solutions Group (TSG) serves IT cabling, audio visual and security design needs; Lilker EMO Energy Solutions provides comprehensive energy auditing, modeling, commissioning and LEED consultation services.
Tags:
Previous StoryNext Story
Print
PDF