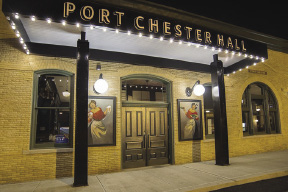 Trinity Building + Construction Management Corp. completed construction of Heartland Brewery's Port Chester Hall located in the Metro North train station. Designed by Niemitz Design Group, Port Chester Hall is Trinity's fifth project for Heartland Brewery and it's first to include a beer garden.
This 10,000 s/f project was built while the train station was fully operational. Scaffolding was erected over a working platform with a contractual commitment of "not fouling the track". It was imperative that all debris was kept away from the track so that train operations were not impacted. A train ticket sales booth located inside the restaurant was rerouted and foot traffic was diverted to a temporary home in a trailer.
Port Chester Hall's scope included an exterior restoration of the existing 1890s era train station facade, roof, chimneys, copper flashings and decorative copper gutter fittings. The interior build out included structural modifications to incorporate a mezzanine level for offices, IT and dry goods. Brick walls received a faux finish, concrete terrazzo flooring was restored and private dining area was fitted out with reclaimed wide plank flooring and decorative wallpaper. As in other Heartland Brewery locations, eclectic furniture was sourced by the owner from vintage shops and the Brimfield Antique Show.
One of the instrumental design elements of the beer garden was a prefabricated outdoor structure that was assembled on site. The expansive beer garden features an outdoor bar, stone fireplaces, vintage string lighting and chandeliers and a granite cobblestone patio with an infrared heating system.
Heartland's Jon Bloostein said "The best experience of working with Trinity is their r ability to respond quickly to adverse or unexpected conditions. I have done half dozen jobs with Trinity and they have always delivered the space on time and every change order was necessary, generated quickly and well costed. They are the best construction company I have ever used, especially for my bigger projects."
Trinity's team managed the continuous design changes made throughout construction, handled the intricate logistical challenges with care, and turned over yet another impressive project for Heartland Brewery.
Tags:
Previous StoryNext Story
Print
PDF