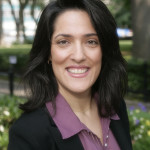 New York, NY This year marks Jennifer Falk’s 10th anniversary as executive director of the Union Square Partnership (USP). With Falk at the helm, the district has experienced remarkable growth, attracted new businesses, tenants and residents while maintaining its identity as the crossroads of Manhattan.

For four decades USP has supported the Union Sq.-14th St. community, creating partnerships that benefit the district, supporting local businesses, investing in the beautification of Union Sq. Park and advocating on behalf of the neighborhood.

Falk, who has spent her entire career in public service, came to USP after serving as first deputy press secretary overseeing then-mayor Michael Bloomberg’s communications strategy for the city’s economic development agencies. Since beginning her role as Executive Director, Falk has worked to continue USP’s mission, cultivating the organization’s role as a strategic neighborhood partner and finding new ways to bring entities together to highlight the area’s strengths.

“As Manhattan’s first business improvement district, USP has a rich history of improving, beautifying and celebrating Union Sq.,” said Lynne Brown, co-chair and president of the Union Square Partnership. “Since she arrived a decade ago, Jennifer has not only continued that work but elevated it, championing our local businesses, bringing our public programs to new heights and constantly finding new ways to bring out the best in our district.”

USP has continued to achieve more and more each year under Falk’s leadership. She oversaw the transformation and renovation of the northern end of Union Square Park. This complex $20 million capital improvement project brought new plazas, a 15,000-square-foot playground and The Pavilion, a seasonal restaurant that is returning this spring for its fourth year on the north plaza.

In 2014, Falk was the recipient of the Manhattan Chamber of Commerce’s “Neighborhood Business Advocate of the Year” award, recognizing USP’s beautification initiatives, capital improvement investments, and targeted marketing and outreach efforts.

Since becoming Executive Director, Falk has increased the organization’s fundraising budget by 60% and last year achieved the highest ever fundraising total in USP’s history at $1.15 million, with plans to increase the total in 2017.

In December 2016 Falk was honored by the USP Board of Directors for her extraordinary work to drive Union Square’s growth and strengthen the district’s business community.

“Jennifer’s extraordinary energy, talent and devotion to the district have truly brought out the best in Union Square over the last decade,” said William Abramson, Co-Chairman of the Union Square Partnership LLC. “Her tireless work – from fundraising to programming to advocacy – has had a tremendous, positive impact on Union Square’s success as one of the City’s most vibrant and popular commercial districts.”

Falk’s work with USP continues to be a driving force in Union Square’s success, highlighting the powerful impact that a business improvement district’s work can have on both the public and private sectors of a neighborhood. The UnionSquare district is entering 2017 as one of Midtown South’s most competitive districts, with several high profile developments on the horizon. Union Square will soon be home to 14th @ Irving, the New York City Economic Development Corporation’s new $250 million hub for the City’s thriving population of tech and innovation start-ups. Reading International is currently in the process of transforming the historic Tammany Hall at 44 Union Square, which will offer more than 75,000 square feet of retail and office space. 2016 was a strong year for Union Square’s retail market, with more than 40 new businesses arriving in the district, and the ground-floor retail market remaining tight with a low 2.1 percent vacancy.

“It has been such an honor to be a change agent in this incredible district for the last ten years,” said Falk. “I am thankful to the many people who contribute to Union Square’s success, including our Board of Directors, executive team, community supporters and City and State partners, and I am confident that Union Square will continue to thrive as a vibrant, welcoming part of the City.”