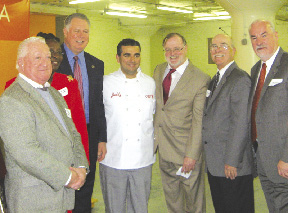 The owners of Lackawanna Center, the eight-story 1.3 million, s/f Jersey City industrial complex at 629 Grove St., recently welcomed its newest tenant, 'Cake Boss' Buddy Valastro, and his 100-year-old business, Carlo's Bakery to their new 30,000 s/f facility with a celebratory luncheon. Joining in the festivities were mayor Jerramiah Healy, Congressman Albio Sires, several members of the city council and more than 100 brokers, local businessmen, invited guests and press.
Creator, innovator and cake maestro, Valastro, who stars in TLC's popular series 'Cake Boss,' has taken a 30,000 s/f ground-floor space that will become a baking facility, distribution center and new office headquarters for his company's growing business interests. Open since 1910, Carlo's Bakery will remain open at 95 Washington St. in Hoboken, N.J.
"Buddy Valastro's commitment to the community and his family's legacy is evidenced by his extraordinary business vision and boundless pride in his New Jersey roots," says Jonathan Ratner, vice president of Emmes Asset Management Co., LLC which in partnership with Sol Goldman Investments, LLC, manages the complex. "His excitement captures the spirit of the Lackawanna Center, its storied history and reemergence as a flourishing commercial center in Jersey City."
A TLC film crew, along with several television crews and reporters were all on hand to capture the festivities, including the grand entrance of the Cake Boss and the unveiling of an impressive three-foot high cake designed as a delicious replica of Lackawanna Center.
"We are thrilled by the arrival of Buddy and Carlo's Bakery to Lackawanna Center," said Ratner. "It's exciting to know that our festivities will be shared with the public-at-large and 'Cake Boss' fans around the country on a future episode."
Following the tribute, brokers and guests were introduced to the Shops at Lackawanna-a retail development project for the property's ground floor which will include 200,000 s/f of retail space and two on-site 300-car parking lots.
Bordered by Jersey Ave., Sixteenth and Eighteenth Sts., the industrial/office/retail complex is situated directly outside the Holland Tunnel, blocks from Hoboken and close to NJ Transit PATH trains.
Founded in 1992 as a privately-owned real estate investment company, Emmes Asset Management Co. is a registered investment advisor. The firm has also partnered with opportunity funds and high-net worth individuals to acquire performing and non-performing debt portfolios from insolvent financial institutions and distressed sellers. To date, Emmes has acquired more than 390 assets, comprising over 36 million square feet at a cost in excess of 1.8 billion. Currently the company has 89 diverse assets under management, spanning office, retail, multifamily and industrial sectors, and encompassing nearly 11 million square feet located across 20 states.
Family owned Carlo's Bakery, located in Hoboken, NJ was originally opened by Carlo Guastaffero in 1910 and acquired by Bartolo Valastro Sr. in 1964. Since his passing in 1994, Bartolo Jr. "Buddy" Valastro, his mother Mary Valastro, four sisters, Grace, Maddalena, Mary, Lisa and their spouses have continued to make CarloÂ’s a household name. Each week the bakery makes an average of 60 wedding cakes, 500 birthday cakes as-well as thousands of cannolis and Italian treats. Buddy continues to create thousands of specialized designer cakes for celebrities from Oprah and Britney Spears, to NJ Governor Chris Christie and the NY Giants. In 2009 CarloÂ’s Bakery became the backdrop of TLCÂ’s hit show Â“Cake Boss,Â” which is now airing Season 3.
To alleviate the demands of his expanding business at the bakery's Washington Street location in Hoboken, Buddy will be renovating a 30,000 square foot space on the ground floor of the Lackawanna Center. Due to open next year, this new facility will allow fans across the country to order from Carlo's Bakery as the company will start accepting internet orders.
Tags:
Previous StoryNext Story
Print
PDF