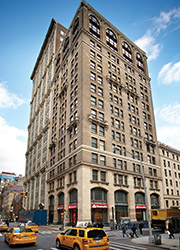 West Michigan-based modern furniture company Herman Miller will relocate its New York showroom to 251 Park Avenue South, according to The Feil Organization, the building's owner and manager. Rent for the 15-year lease was not disclosed.

Herman Miller, known for its iconic modern designs, will move to join its subsidiary Maharam Fabric Corporation already headquartered in 23,000 s/f on the building's top 3 floors. Herman Miller will occupy 4,061 s/f of ground floor space, and nearly 23,000 s/f across second, third and fourth floors. The combination brings total occupancy to 51,000 s/f in the 120,000 s/f building.

251 Park Avenue South is in the midst of a massive renovation. "Obviously, Herman Miller was familiar with the location, but no building looks its best mid-overhaul," Feil said. "They were able to look past the usual chaos of a major renovation to envision what the space will become."

The renovation of 251 Park Ave. South encompasses the lobby (designed by Dan Shannon of MdeAS Architects), elevators, windows and mechanical. Brian Feil also notes that 251 Park Ave. South's footprints of approximately 7,600 s/f on each floor allow for great tenant flexibility. Feil is now leasing floors 5 through 13, one of which offers a full-floor pre-built showcase. Asking rents are in the mid- to high $70s per s/f range.

"When we informed Santander that Herman Miller was going to take their current location, the bank wanted to remain in place for as long as possible - and to downsize somewhat in a new location," Feil said. "Because we have built a portfolio of properties in the same general area, we were able to accommodate them in another historic, but newly renovated building. The tenants, the buildings and the neighborhood all benefit."

Santander Bank will kick off the releasing of 841 Broadway and take occupancy of its new 2,300 s/f space in the third quarter of 2015. One remaining 2,200 s/f retail space is still available. Feil also owns 853 Broadway next door, another recently renovated and repositioned building that just completed its retail component with the signing of a 16,000 s/f lease with Capital One, slated to open in 2016.

In recent years, the Midtown South area has become a hub for what is referred to as TAMI (Technology, Advertising, Media and Information) tenants. Also nearby are popular destinations including Pete's Tavern, Shake Shack and Gramercy Park. Other Feil Properties in the area include 250 Park Avenue South, 257 Park Ave. South and 261 Fifth Ave.

Built in 1913, 841 Broadway (also known as the Roosevelt Building, as Theodore Roosevelt's grandfather once had a home on the site) offers 129,239 s/f of office and retail space on eight floors.