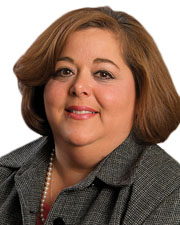 How do you hold your own in a negotiation?
With over 30 years of experience in the title insurance industry, I have learned that a key component to successful negotiation is to be fully versed in all sides of the argument. An essential skill of a good negotiator is the ability to listen and comprehend, and then to campaign vigorously for your position while simultaneously respecting the viewpoints espoused by others.

What is the best advice you have received, and who was it from?
The best advice I ever received was to always try to do the right thing. I was always taught that, “Integrity is doing the right thing even when no one is watching.”  This is a lesson I learned from my mother at a young age and which I have tried to carry through in everything I do–from my own parenting, to social interactions; and professionally in my business dealings with colleagues, clients and staff members.

What was one of your biggest accomplishments in the last 12 months?
On a professional level, I am extremely honored and humbled to have been nominated as president-elect of the New York State Land Title Association (NYSLTA). My term, as president, would commence in September 2020. The association is the voice of the title industry and advocates and advances the common interests of all those engaged in the business of title insurance. Among the most critical functions of the NYSLTA is advocacy on behalf of the title profession and consumer protection. Another professional accomplishment I am extremely proud of is being selected to write updated chapters in the esteemed book entitled “Real Estate Titles” written by James Pedowitz and published by the New York State Bar Association. I believe the update version of the book will be published in January of 2020. This book is regarded as the best treatise on real estate titles in New York.

What recent project or transaction are you most proud of?
We have worked on numerous large affordable housing projects in the city, as well as in Westchester County. I am proud to be part of these worthwhile projects as a certified WBE. To name a few projects: