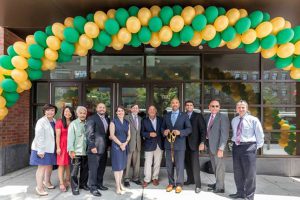 Ribbon cutting for the grand opening of Triangle Plaza Hub.

South Bronx, NY Triangle Equities, a N.Y.-based developer, has completed  its $35 million, 88,000 s/f multi-use complex – Triangle Plaza Hub. This milestone was marked by a grand opening celebration on July 13th at the development which was attended by executives from Triangle Equities, along with elected officials, finance partners, and other stakeholders. Fine Fare Supermarket, Triangle Plaza Hub’s anchor tenant, is simultaneously celebrating its grand opening.

“The completion and grand opening of Triangle Plaza Hub is a great source of pride for us,” said Lester Petracca, president of Triangle Equities. “We’re so excited to bring the services and amenities of this community-centric development to a deserving area, which, we believe, will catalyze continued improvements to this outstanding neighborhood.” 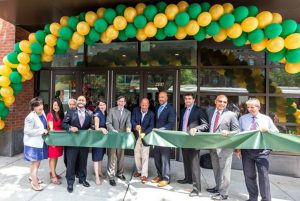 Ribbon cutting for the grand opening of Triangle Plaza Hub.

“We’re delighted with the mix of tenants we have at Triangle Plaza Hub and even more so now that their services and amenities are available to this South Bronx community,” said Petracca. “While this was an exceptionally challenging project to build, as is the case with the majority of our developments, reaching this milestone and providing tangible value to a community is what truly matters to us.”

“By providing access to jobs, fresh foods, a range of health care services, higher education and more, the Triangle Plaza Hub will greatly benefit the Melrose neighborhood and the entire South Bronx community,” said NYCEDC president Maria Torres-Springer. “In addition to community access, the Hub created over 150 construction jobs and will create over 190 permanent jobs once fully operational. The grand opening of this mixed-use hub is yet another example of how public-private partnerships help support neighborhood revitalization efforts not only in the Bronx, but throughout the five boroughs.”

“Projects like Triangle Plaza Hub are steps in the right direction towards an even greater Bronx and better options for those who live here,” said Bronx Borough President Ruben Diaz Jr. “By bringing new business, creating more jobs and providing products and services in our community, this project will provide a real asset for the people of this community and The Bronx as a whole. We welcome the commercial and retail aspects of this new development that underscore the commitment of business owners and investors to our borough as, well as their acknowledgement that The Bronx is a very welcoming marketplace for them. The Bronx continues to attract new businesses and add new jobs, and this project is a key piece of our continued revitalization.” 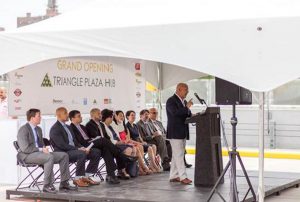 Fine Fare Supermarket, which will open to the public in this weekend, will provide critically needed access to fresh food to an underserved area, as part of New York City’s Food Retail Expansion to Support Health (FRESH) initiative and through support from the New York Healthy Food & Healthy Communities Fund (HFHC). With the closest operating full-service supermarket currently located more than a quarter mile from the site, Fine Fare is anticipated to increase access to fresh produce and quality meats for the residents of the Melrose neighborhood.

The Low Income Investment Fund (LIIF) provided a $5.75 million leverage loan through the HFHC Fund; capitalized by Goldman Sachs and Empire State Development. In addition, LIIF contributed a $300,000 grant from the HFHC Fund. 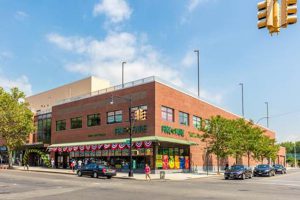 “LIIF is proud to have partnered on the Triangle Plaza Hub project, which will connect South Bronx residents with healthy, affordable food in addition to education opportunities for working adults and expanded access to health care – resources needed for people to thrive,” said Kirsten Shaw, Director, Eastern Region, at the Low Income Investment Fund (LIIF). “We are pleased that our New Markets Tax Credit allocation and financing from the New York Healthy Food Healthy Communities Fund helped realize this vision for an integrated approach to building a healthy community.”

“We are excited that this project will create access to healthy food, healthcare, and educational opportunities in a community with excellent public transportation,” said Sherry Wang, a vice president in the Goldman Sachs Urban Investment Group.  “Triangle Plaza Hub is a critical part of our commitment to the Bronx, where we have made $160 million in investments to catalyze economic development and create jobs.”

Located at the Hub – a Bronx transit center that over 200,000 people pass through daily –Triangle Plaza Hub is set to transform what had been an under-utilized municipal parking lot in a generally underserved area into a vibrant mixed-use commercial and community facility.  In addition to the commercial and retail aspects of the development, an 8,000 s/f plaza has also been completed for public enjoyment. The project has been developed in accordance with energy efficiency and green building principles with a LEED Silver certification.

In addition to creating approximately 191 permanent jobs and over 150 construction jobs, Triangle has been working with the City’s Hire NYC program to develop a targeted local hiring and workforce development plan to fill the newly created jobs.