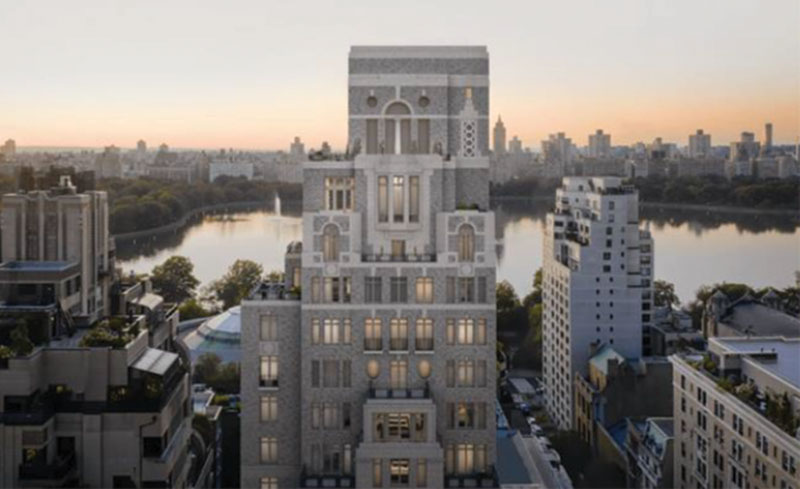 Manhattan, NY According to CBSK Ironstate, a partnership of CB Developers, SK Development, and Ironstate, 1228 Madison Avenue has topped out. The boutique-scale residential building on the Upper East Side was designed by Robert A.M. Stern Architects, with interiors by Kelly Behun Studio. The building is comprised of 14 private full-floor homes, plus a duplex penthouse.

“1228 Madison Avenue is a refreshing addition to Manhattan’s luxury real estate market, the intimate scale of the building lends itself wonderfully to locals and families seeking a home in the heart of the Upper East Side,” said SK Development’s Scott Shnay.

“Robert A.M. Stern Architects and Kelly Behun Studio have brought to life residences that are rooted in the great history of our city, but possess a sensibility that looks towards its future.”

The first on-site model residence is estimated to be unveiled in the first quarter 2021, with occupancy following in the third quarter.

For the developers behind 1228 Madison—a long-term partnership of CB Developers, SK Development, and Ironstate Development, operating under the collective name CBSK Ironstate—roundtable decision-making enables a bold design vision. “It’s not design by committee,” said Scott Shnay, a third-generation developer and partner with his father, Abe, in SK Development. “The committee selects the architect, then we trust the architect to design, the same way we trust the contractor to build, and the marketing team to sell in their respective roles.” The other partners of CBSK Ironstate are Charles Blaichman and brothers Michael and David Barry of Ironstate. The partnership’s strength consists in being a like-minded group of family companies that share multi-generational experience and a long-term vision.

As hands-on developers who enjoy all phases of the development process, CBSK Ironstate plans and programs projects to be logical, efficient, and attractive to a large buyer pool. The partners agree, a collaborative team process is integral in achieving quality results: they take as much pride in the execution of their developments as in the forward-looking design outcomes.

“We have designed a building with a personality all its own, but one that grows out of the traditions of the Upper East Side and the eclectic architectural spirit of Carnegie Hill,” said Paul Whalen, a partner at Robert A.M. Stern Architects. “1228 Madison Avenue participates in the life of one of the world’s great shopping streets and rises to celebrate panoramic views in all directions, including spectacular views over Central Park.”

1228 Madison Avenue is Robert A.M. Stern Architects’ smallest multifamily residential building in the borough to date, but features expansive two-to-four-bedroom homes, each with an individual point of view. The traditional façade is rooted in Classical principles and the eclectic, urbane and understated character of Carnegie Hill. The façades deploy unforced symmetry, freely mixed with classical motifs like columns and arches, all held together by strong horizontal lines.

“Taking cues from some of New York’s most admired early 20th-century apartment houses,” said Michael Jones, also a partner at Robert A.M. Stern Architects, “We’ve elegantly expressed the variety of rooms within by carefully situating windows and terraces on our building’s facades, endowing each full-floor residence with a sense of individuality as the building steps up to its romantic crown.”

With her first multifamily residential commission, Kelly Behun shares her passion for inventive detail and the warm, sophisticated and eclectic aesthetic for which she is known. Behun designed each home’s interior to possess its own unique character and charm; the contemporary interiors complement the traditional elements of the façade with a softer, lighter touch and an eye for the unexpected. The nuanced, textured palette features warm shades of whites and creams mixed with light and medium toned woods and a range of European marbles.

“With the interiors at 1228 Madison, we wanted to create an elegant setting to reflect the Classical style of the exterior designed by world renowned Robert A.M. Stern Architects,” said Behun. “Every detail within the building, from the chevron oak floors to the burnished nickel finish on the custom P.E. Guerin door hardware I designed for each residence, has been carefully chosen to create a harmonious environment that feels very classic but with a unique and modern twist.”

With only 14 full-floor residences and one duplex penthouse, the intimate scale of the building makes it especially appealing. A significant number of the homes offer Juliet balconies and private outdoor spaces. With ceiling heights ranging from 9’3” to 18’, living rooms enjoy spectacular light and views, some of which include Central Park, the Jacqueline Kennedy Onassis Reservoir and the iconic Central Park West skyline. Amenities include a 24-hour doorman, fitness center with separate training studio, and a landscaped roof terrace with Central Park views.