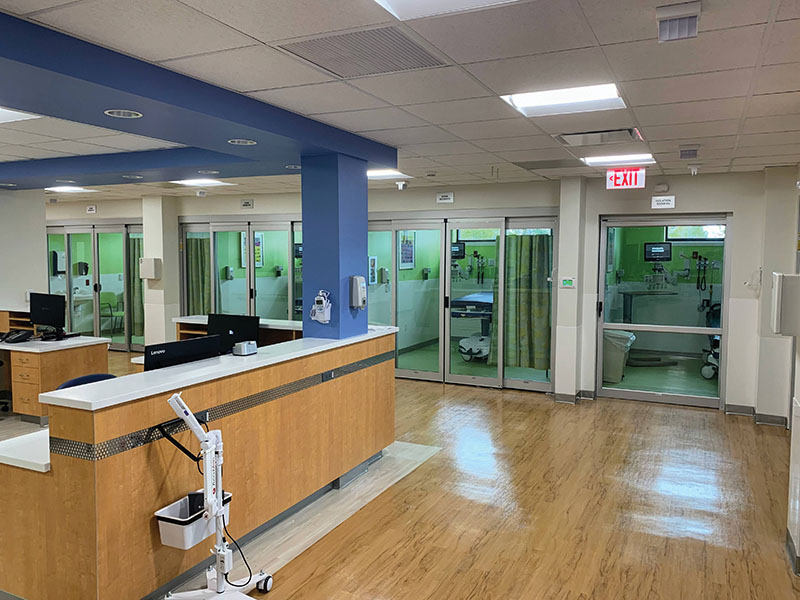 West Islip, NY Leading global design firm Stantec celebrates the completion of the new $14 million pediatric emergency department at Good Samaritan Hospital. The hospital, which serves 22,000 pediatric patients each year, had outgrown its existing emergency department in recent years. Through a planning and design effort led by Stantec, this 6,500 s/f modular expansion has enabled the hospital to add 12 treatment bays, two of which are isolation rooms, dedicated to critical pediatric care.

Comprised of 16 modular units, the project’s interiors include large exam rooms with sound rated walls and doors. Modular construction enabled the project team to also create larger corridors and storage alcoves that house the multitude of medical equipment that must support an emergency department, but often encumbers the space.

“From the early stages of this project, it was clear that an addition would best accommodate Good Samaritan Hospital’s goal to create a dedicated space for the emergency care of its youngest patients. Given the site logistics, the modular building approach became the ideal solution,” said Ed Casper, project architect for Stantec. “We were proud to work hand-in-hand with the hospital in making this dream come true by implementing child-friendly interior design features, maximizing the use of natural light and acoustics for comfort and privacy, and, of course, creating a seamless flow between spaces for staff efficiency.”

“At a time of great uncertainty, we are proud that we were able to follow through on our promise to the local community with the on-time opening of our new pediatric emergency ward,” said Ruth Hennessey, president of Good Samaritan Hospital. “This new facility will improve operational efficiency and provide a more calming environment for our young patients and their families in a quieter, more intimate area.”

Stantec led the planning, architecture, and interior designs for the project, alongside general contractor Axis Construction Corp. and modular manufacturer MODLOGIQ. The firm also assisted with state and local permitting, allowing the project to advance from initial approvals and begin modular fabrication in December 2019.

From its inception, the project called for modular components, which allowed the project team to expand the existing facility with minimal impacts to hospital operations from construction staging.

“In traditional construction projects with a limited site footprint, parking spaces are some of the first areas to be occupied by construction activities. This was simply not an option for this facility, which has one of the busiest emergency departments on Long Island,” said Ralph Lambert, chief executive officer of Axis Construction.

The modules were built by MODLOGIQ in neighboring Pennsylvania and were nearing completion as the COVID-19 crisis began to escalate in early March, causing construction sites across the state to shut down. However, since the modules were being fabricated in a controlled facility, the work was allowed to continue. The modules arrived on site in April and were dropped into place within three days, allowing the project to proceed on schedule. In the months leading up to the grand opening in July, on-site work included installation of HVAC systems and interior finishes, which were designed to create a seamless appearance with the rest of the hospital.

“Permanent modular construction is increasingly being utilized in healthcare for its flexibility and speed of delivery once approvals are in place from local authorities. Approximately 25% of Stantec’s healthcare projects use prefabricated elements, with this figure increasing every year,” said Casper. “Looking back and considering the impacts of the COVID-19 pandemic, we realize how important it was to use modular construction in supporting the needs of this client and the community they serve.”