“This is a moment of enormous pride for me and for everyone in the Silverstein organization, and for the thousands of women and men who had a hand in creating this amazing building,” said Silverstein, chairman, Silverstein Properties.  “Starting with 7 WTC and the rest of the towers that followed, we sought to create modern, environmentally-conscious and technologically-advanced offices.  Places that foster creativity where young people would want to work and collaborate. That meant great architecture and sustainable design, but also improved transportation, a more vibrant streetscape, new shops and restaurants, great public spaces, and exciting and fun public space art.”

“The new 3 World Trade Center is a soaring symbol of the revitalization of downtown New York City and a testament to the enduring spirit of New Yorkers after 9/11. 3 World Trade will be a hub of commercial activity and growth for the city and support our efforts to ensure New York remains the economic capital of the world,” said governor Andrew Cuomo.

With a total of 2.5 million s/f of office space, the 80-story tower will feature 30,000 to 70,000 s/f floors with 360-degree Manhattan views and 13-ft. 6” to 24-ft. ceilings.  Three floors (17, 60 and 76) offer tenants access to outdoor terrace space.  Consistent with the Silverstein organization’s commitment to sustainable design and energy efficiency, and following 7 and 4 WTC, 3 WTC will be a LEED-certified Gold office tower.

“The continued resurgence of Lower Manhattan is a powerful demonstration of the resilience of New York City. We rose from tragedy bigger, bolder, stronger, and still open to the world.  3 WTC is the next chapter in that story,” said mayor Bill de Blasio.

“For the Port Authority family, our stewardship of World Trade Center could not be more sacred,” said Port Authority chairman Kevin O’Toole. “Today marks a pivotal moment in its on-going evolution from construction site to a living campus welcoming millions of annual visitors and tens of thousands of workers every day. The remarkable renaissance it represents is a fitting tribute to all of those who were lost on September 11th and the countless others who were impacted.” 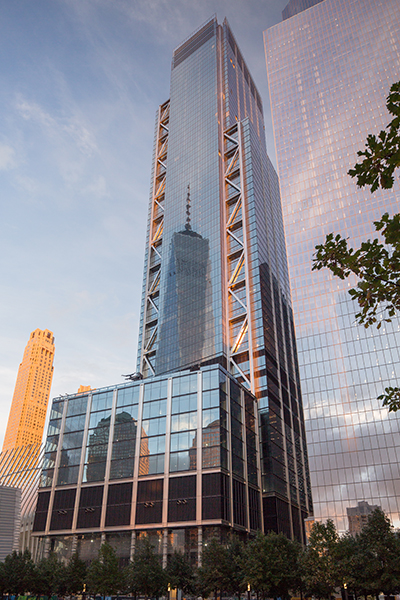 “The World Trade Center campus is now more open, more welcoming, and more dynamic than ever before,” said Port Authority executive director Rick Cotton. “The opening of 3WTC, coupled with new pedestrian areas, public art, and community events, further unlocks its value and the entire site’s resurgence as a true anchor of the Lower Manhattan community. Congratulations to Silverstein Properties, the many talented people throughout this complex, public-private partnership, and the thousands of men and women whose dedicated hard work made it a reality.”

“It’s truly amazing to see the new life of the World Trade Center campus, and to celebrate this wonderful achievement,” said congresswoman Carolyn Maloney (NY-12). “It has taken constant work from me and my colleagues to ensure that our city received the funding it was promised by the federal government to help affected individuals and businesses recover. Larry Silverstein has been instrumental in the revival of Lower Manhattan-3WTC is just another milestone in its continued revival. I applaud him for his continued commitment to the neighborhood, his energy and hard work have been critical to the rebirth of this area.”

Richard Rogers, founding partner, Rogers Stirk Harbour + Partners said, “It has been a great privilege to design one of the new buildings on this key site in New York.  We are particularly delighted that we have been working in the heart of this vibrant city.  This was a complex and challenging project, but one which has helped to contribute to the revitalization of New York City and one which will help to inspire a new hope for the city’s future.”

Richard Paul, partner and project lead, Rogers Stirk Harbour + Partners said, “This building is an exceptional location within the revitalized urban fabric of Lower Manhattan.  It makes a significant step towards a new sense of place in New York’s World Trade Center.  The new workplace will bring vitality to the area and with the extensive public realm, a new sense of urban integration.”

“We’re proud to be the anchor tenant of 3 World Trade Center,” said Kelly Clark, Global CEO of GroupM. “Lower Manhattan is quickly becoming a world capital for advertising, media, technology and information. We’re excited about our inspiring new space and everything this neighborhood has to offer.”

In total, the construction of 3 WTC involved the work of more than 4,000 union construction workers over the course of millions of hours.  The building is expected to employ approximately 100 permanent and temporary workers to operate and maintain.

“Since the moment Larry Silverstein called Dan Tishman just after September 11th, we’ve been working with Silverstein Properties non-stop for almost 17 years.  Together, our teams have accomplished what at times seemed impossible,” said Jay Badame, President and COO, AECOM Tishman.  “As this incredible building joins its iconic neighbors, we owe a tremendous debt of gratitude for the hard-work and dedication of the thousands of skilled trades people, architects and engineers who made it happen. We couldn’t be more proud to have been part of this project.”

According to a recent Downtown Alliance report, Lower Manhattan’s vacancy rate among commercial inventory remained below 10 percent for the fifth consecutive quarter.  Last year marked one of the neighborhood’s most active seasons for commercial real estate activity, during which the Financial District topped all other submarkets in leasing transactions.  Emphasizing the area’s attractiveness among incoming companies and private sector professionals, particularly a growing number of media companies, Downtown Manhattan now houses over 242,000 professionals, signaling the highest employment level in the neighborhood in over 15 years.

“The opening of 3 World Trade Center is an important milestone not just for Lower Manhattan but for New York and the nation,” said Jessica Lappin, President of the Alliance for Downtown New York. “As the future home to both ad giant GroupM and consulting legend McKinsey, the building stands as a testament to the emergence of Lower Manhattan as a destination for an increasingly diverse set of companies. 3 World Trade’s first day is also a proud moment for our nation. With its opening, the entire World Trade Center campus takes a huge stride forward towards completion.”

Designed by Pritzker-prize winning architect Richard Rogers and his firm Rogers Stirk Harbor + Partners, 3 World Trade Center will enliven and seamlessly integrate into Downtown’s streetscape, with a major concentration of retail – both at the street-level and in underground pedestrian concourses that lead directly to 11 subway lines and the PATH trains.

GroupM, the world’s leading media investment management group, signed a 20-year lease in December 2013 to occupy approximately 700,000 square feet on 13 floors at the base of the 80-story tower.  McKinsey signed a lease earlier this year for 185,000 square feet and IEX signed a lease for 44,000 s/ft.  The building is currently 38% leased.

3 World Trade Center is a model of transparency and sustainability.  The tower consists of a reinforced concrete core with steel structure outside the core and is clad in an external structural steel frame.  The building features floor to ceiling glass, and all four corners and each floor plate of the tower are column-free to create an open workspace environment – key for cutting-edge companies in brainpower driven businesses like technology, advertising and branding, as well as law and financial service firms. 3 World Trade Center will be a LEED-certified Gold office tower.

nasty bunch of people, really rotten conspired with the Port Authority and Red China (given the space by the Durst/PANY that WOW should have gotten for a "businessman's club") to keep Windows On The World from re-opening one nasty bunch of people ---- Durst, the Port Authority, Silverstein, and Andrew Cuomo and Chris Christie truly rotten people remarkable in their ability to take a re-building process that America and New York should have been able to be proud of, and turn it into something ugly and vile