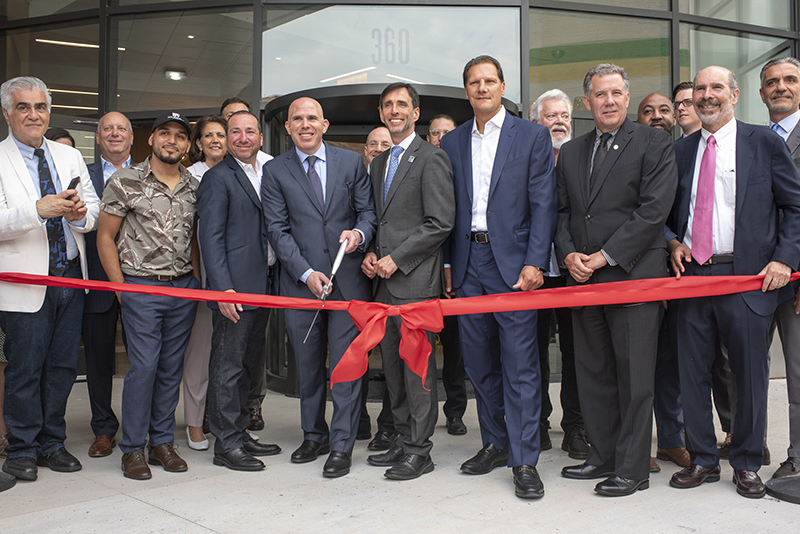 New Rochelle, NY Marking a  milestone in the evolution and revitalization of the city’s downtown, the development team behind 360 Huguenot, RXR Realty’s newest residential project and the first of many slated as part of its master planned development for the downtown area, joined with city officials for a ribbon-cutting ceremony to officially mark the grand opening of the 280-unit rental building.

“RXR worked with us hand in glove to shape a plan that fit the vision of our community, met the realities of the marketplace, and enabled everyone to benefit. Since the beginning of our partnership, we have been able to celebrate one milestone after another, and today is one of the best, as it marks the first completed project from our master developers. We are thrilled by this achievement, recognizing that it will contribute immensely to a more vibrant and successful downtown.  And we look forward to additional successes as our partnership moves forward,” said mayor Bramson.

Marking a milestone in the city’s  redevelopment initiative, 360 Huguenot is the first high-rise development to hit the market as part of the city’s ambitious Downtown Rezoning plan launched in 2015 in conjunction with the NYC-based real estate operating and development company. Together, the city and RXR Realty have outlined  12 million s/f of new development downtown, with various uses including residential, retail, restaurant, office, hospitality and other institutional space. The rezoning is one of the largest and most significant economic development initiatives in Westchester County history.

“As we think about the future of New Rochelle, I believe this masterplan process will be a model of how we revitalize suburban areas in the 21st century. This partnership with the City was not about just one project, but a vision for the whole downtown. It was something we spent time working on with the local community and elected officials to turn that vision into a reality,” said Rechler.

“360 Huguenot is the first step in the evolution of New Rochelle. We are really proud to have developed a plan, in conjunction with the city council, leadership and community itself, that builds on the diversity and character of what is already here.  We were looking to bring a new level of luxury living to the area, providing first class homes at an attainable price that attracts residents, businesses, jobs and investment to the community and further enhances the neighborhood,” said Pinsky.

At the ceremony, RXR and the city of New Rochelle announced photographer Daniel Martinez as the winner of 360 Huguenot’s artist contest, which was created as a unique initiative to support local artists and highlight the creative community as a key demographic of New Rochelle. Martinez, a Bronx native who has pursued a career in photography, will receive one year rent-free in a studio apartment in the building, which is located in the City’s historic arts and cultural district. Over 100 video entries to the contest were received from a wide array of artists across the country, with three finalists announced last month. Martinez was chosen as the winner by the public via an online vote earlier this month and will move into the unit in September. Click here to view his work.

“It is rare for artists anywhere to have the chance to truly focus on what drives us in life and cultivate creativity without worry. What the city of New Rochelle along with RXR is gifting me is invaluable. I am incredibly grateful for the opportunity to extend my art within a new community that I am now lucky to become a part of as a resident at 360 Huguenot,” said Daniel Martinez, winner of the contest.

In addition to 14,000 s/f of new retail space, the base of 360 Huguenot also contains a new, 10,000 s/f arts and cultural space also constructed by RXR that will be programmed by the city as part of New Rochelle’s Community Benefit Bonus program. In connection with the construction of 360 Huguenot, RXR has also restored the historic façade and marquee of the former Loews Theatre along Main St., which had been closed and gutted several years ago before RXR’s involvement.